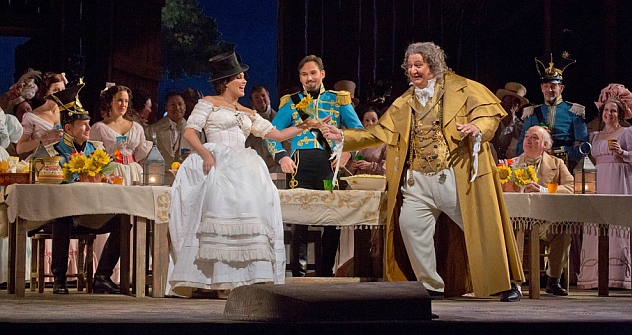 Yesterday Anna Netrebko opened the Metropolitan Opera season in the L’Elisir d’Amore, her 13th production at the theater.

Almost a decade ago, Anna Netrebko sang at Maly Zal as part of the first Moscow Easter Festival. She was already a much-talked-about starlet then; lithe and charming on stage. But today, she is a familiar face on billboards all over the world and a name that guarantees a sold-out show. Like many hardworking stars confident and balanced in their popularity and success, her manner is unaffected, gracious and straightforward. She doesn’t have to prove anything to anyone, or pretend to be what she’s not – she is Anna Netrebko.

She seems to have it all – popularity and support back in her homeland Russia despite infrequent performances there. She obtained Austrian citizenship several years ago (to make traveling easier), and enjoys a solid base at the venerable Wiener Staatsoper.

Most importantly, she is now the face of the Metropolitan Opera. This month, she opens the season in the role of Adina in Donizetti’s comic opera "L’Elisir d’Amore", her 13th production at the theater since her debut in 2002. Last season also opened with Netrebko, in the title role of Anna Bolena.

“I know there is a certain image about me,” she said, and indeed she’s not the typical opera singer, photographed beautifully in floor-length gowns. Gracing the pages of glossy magazines such as Vogue, her photos don’t differ much from those of a fashion model or actress, wearing everything from jeans to haute couture. “But we didn’t create this ‘diva in jeans’ just because it sells. It happened naturally. I was very young when all this started, and I love glamorous photo shoots… I didn’t see anything bad in that, I had some endorsement deals, also cool, why not? Somehow, it all happened; this glamour stuff, Chopard and everything.”

She evidently relishes all that comes with being a celebrity, but she has always resisted going into pop music, although she knows it’s “cool” and would make her even more glamorous. “Just not my thing,” she said, although she did do a song with Russian pop star Philipp Kirkorov last year. “Dima Hvorostovky gave him my number and so he called me and I said ok, send me the song. And I listened to it and actually liked it. And I mean, it doesn’t cost me anything, one hour in a studio, that’s it.” Making the music videos and getting awarded was fun, she says, but, dropping into Russian, she added, “these pop singers – they all lip synch!”

She speaks volubly and fluently in English, and her son, Tiago, is picking up three languages—Spanish from his Uruguayan father, the baritone Erwin Schrott, Russian from his mother and English from New York where the family lives. “We’ll stay here for several years, I want Tiago to study here,” Netrebko said. “Here there’s so much to do – swimming pool right in the building, special fitness clubs and so on. I travel all the time and sometimes I have to leave him now because of school – it’s a torture for me. But if I know he’s busy all day doing interesting things, I’m calmer. In Vienna he would just see his nanny all day, maybe another nanny sometimes. It’s not good.”

Being a mother has made life very difficult, she continued in a lower voice. Always torn between family and career, she says she understands the decision of some singers never to have children “because to have a kid means so many problems, so much money to spend, so much, it’s unbelievable.” You have to work hard to keep a balance, “because life gave me so much, I cannot just say, I’m finished with my career, now I’m doing my family. I think I will be punished if I do that.”

Now 41, her versatile and light voice has shifted in recent years, and she is making foray into more spinto repertoire, which demands a slightly heavier, more dramatic voice. Next season, she will star in the Met’s new production of “Evgeny Onegin” as Tatiana, a suggestion made by Peter Gelb, the theater’s general manager. After that, she has plans for Leonora (il Trovatore), Manon (Manon Lescaut) and even Wagner–Elsa in Lohengrin, which she says is one of her dreams. She’s also recording a CD of Verdi arias with Gianandrea Noseda in Torino, and sang Lady Macbeth – a very dramatic heavy soprano role that is sometimes even sung by mezzo sopranos.

After L’Elisir d’amore at the Met, she will take to the road doing concert performances of Tchaikovsky’s Iolanta, an opera little known outside Russia, which she tentatively hopes people will like, although it may not be the kind of flashy gala concerts her fans are used to. “There’s one thing I don’t like – these gala concerts. Once you start doing them, people always expect that from you.” The more modest things, such as recitals with Tchaikovsky romances don’t get the enthusiastic response she gets at gala concerts, she explains. “Because usually in concerts I’m dancing, shoes, champagne, gowns, whatever – and if I don’t do these things they are disappointed. That disappoints me.”

That said, Netrebko is both a hard worker and a crowd pleaser. If she has to sing “hit after hit after hit” she will do it, and wow the crowd with her energy and gayety. After all, even the life of Anna Netrebko cannot be flawless – she once said in an interview that if everything is good, Russians become suspicious – and she identifies herself as being “very” Russian. “When everything is so good and perfect, it means something is wrong. It’s always like that. And the opposite is true too – when everything is completely horrible and bad, it means something good is coming.”

Audiences outside New York can see Netrebko perform at the Met via Live in HD, which shows the performances in movie theaters around the world. The live broadcast of L’Elisir d’Amore will be on Oct. 13, 1 pm EST, but there will be reruns for several weeks after that. For a full list of participating venues and viewing times, go to the Metropolitan Opera website.