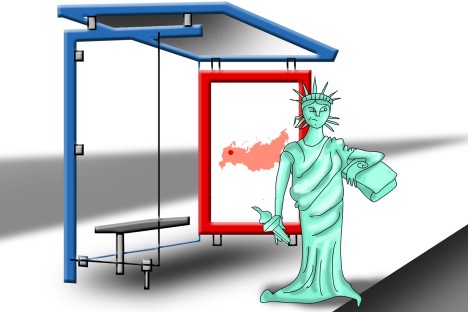 Next week USAID will leave Russia. The closure of USAID’s office in Moscow is largely symbolic – and it is not a good signal.

When Russian authorities asked the United States Agency for International Development (USAID) to stop its operations in Russia from October 1, discontent was limited to a small number of politically active NGOs.

This lack of protest should not be mistaken for a negative attitude to foreign aid. With or without Putin, Russia will long remain a rich country with many poor people living in it. There will always be room for charity or well-targeted development aid from abroad, and Russians cherish the opportunities foreign aid opens.

They are also prepared to defend them. For example, when five to 10 years ago the Russian government talked about imposing tighter controls on international adoptions, popular discontent was much more serious than over the decision on USAID. “Why is the government trying to be patriotic at citizens’ expense?” was the dominant question in the press and in casual conversations.

So, why wasn’t there a protest rally over the USAID decision? Because, much to my regret, the Russian foreign ministry was expressing the feelings of many Russians when it said that “by distributing its grants, USAID made attempts to influence political processes, including elections at various levels and some institutions of civil society.” It does not mean Russia does not value humanitarian assistance or is not thankful for the aid USAID provided in the difficult times – mostly in the Nineties. But times have changed, and USAID has become interested in different things, and humanitarian assistance makes up a much smaller part of its expenses.

And here Putin’s wish to keep the Russian political scene clear of foreign influences (a legal requirement) coincides with the mood in society. Most Russians are happy to see foreigners helping the disadvantaged or investing in Russia’s economic development. But Russians are not happy to see foreigners decide Russia’s future by pulling the strings of politics – even if that is done under the slogans of support for “fair elections”.

And USAID has become more interested in politics since Vladimir Putin came to power in 2000. The American U.S. State Department’s spokeswoman Victoria Nuland admitted USAID had planned to spend at least $ 50 million on developing “civil society” in Russia – in addition to many other programs helping this evergreen sector, which is becoming ever more politicized.

Phrases about the idyllically apolitical nature of “investments in democracy” contradict the combative tone of some of these “investors” who sometimes appear willing to force democracy on Russia in the aggressive way Bolsheviks imposed their “socialism”. David Kramer, president of Freedom House, an American NGO which is USAID’s partner in many projects, suggested Obama should just tell USAID to stay and continue making Russians free against their own free will.

“Instead of pushing back and forcing Putin to publicly kick out USAID, the Obama administration has capitulated peremptorily,” Kramer wrote in The Washington Post. Kramer wants the Russian bureau of USAID, an American government structure, to be lenient and compliant when orders come from Washington but not to take “no” for an answer when the “no” comes from Moscow.

The consequences were easy to predict: Kramer in fact predicted them, talking about a “forced” kick from the Russian authorities. The effect of such a kick would be an international scandal; an unpleasant affair normally to be avoided among civilized nations. Unfortunately, in relations with “Putin’s Russia” scandals appear to be welcome. The tactic of some western NGOs and “government organizations” behind them is to provoke scandal in Russia – not to avoid them.

“Unfortunately, many western-financed NGOs are concentrated on high-profile political cases or on fighting Putin by all means, leaving aside such problems as the plight of Russian refugees from the former Soviet republics or attempts to rehabilitate the Nazis who happened to fight the Soviet Union in, say, Estonia or Latvia,” says Alexander Brod, head of the Moscow Bureau for Human Rights.

Of course, the departure of USAID will be bemoaned by those NGOs in Russia which received generous donations for their attempts to prove elections were falsified and human rights breached.

“USAID for many years gave grants to our organization, they provided the bulk of the money we used to organize observing missions at elections,” Lilia Shibanova, head of the Golos human rights’ association, told RIA Novosti news agency. “There are very few funds in the world which finance the monitoring of elections.”

Critics of Golos note that it monitored the latest parliamentary elections in Russia with a “presumption of guilt” on the side of the authorities, saying in advance they would tamper with the election results in favour of United Russia. Optimistic bias on the side of government media on election days is usually balanced by the “pessimistic bias” of western-financed organisations. Russia remains far from its goal – transparent elections that would not be questioned by rival groups.

The State Department and USAID said they would continue to finance Russia’s civil society, – come what may. There is little doubt that they will fulfill their plans so the closure of USAID’s office in Moscow is largely symbolic – and it is not a good signal. USAID’s Nineties audience, people in need, shrank as the agency concentrated solely on “civil society” – as it understood it. And the audience of the pro-American Russian civil society is ludicrously small. Hence the lack of protest – and attention in general.