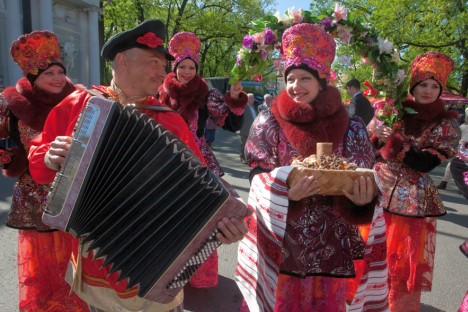 Over the weekend of Sept. 21-23, the city of Veliky Novgorod returned to the Middle Ages. Townsfolk were clad in homespun smocks, went gallivanting on medieval Russian barques, listened to the chimes of ancient belfries and conjured up the atmosphere of Russian life a thousand years ago – at the first dawn of Russia’s statehood.

Preparations for the 1150th anniversary of Russian statehood began in Veliky Novgorod long before Russia’s president had put pen to paper to sign the decree. The guiding slogan behind the event was “Veliky Novgorod – Russia's birthplace.” By the time it came to decide where the anniversary should be celebrated, there was no doubt that Veliky Novgorod – a Russian city 325 miles northwest of Moscow – would serve as the main venue.

Townspeople in Novgorod have long considered their city the first and finest in Russia, and it was they who came up with the slogan “Veliky Novgorod – Russia's birthplace.”

In the year 862, Novgorod’s medieval barons are said to have summoned King Rurik to be their ruler. King Rurik is a historic figure who now identified by some historians as the prominent Viking lord Rurik of Jutland. A great many historians believed, both in Czarist Russia and in the Soviet era, that the circumstances of this summons had been invented. They insisted, instead, that Rurik was originally a Slavic lord, not a Viking, since the Russian state could not have been created by a foreigner.

Rurik’s Encampment became the centerpiece for the anniversary celebrations. Regional authorities indicated that the site will eventually become a major tourist sight of Novgorod Region. Rurik’s Encampment, however, is not particularly inspiring; it is a hard-to-reach, wooden structure by the ruins of the Church of the Annunciation. Yet, visitors arrived by water as the ancient Vikings did, adding to the charm of the experiencec. Waiting to greet visitors on the curved hills was an entire settlement of historical re-enactors, including armored warriors with broadswords and long-haired maidens in linen gowns and outlandish headgear. Here, at the site of Rurik’s Encampment and against the backdrop of a 9th-century battle, the Prince’s Stone was unveiled. The memorial rock towered 8.5 feet tall and weighed some 40 tons.

First-time visitors from Russia and abroad were undeterred by the ungainly appearance of the ancient camp. Stepping along the gangway, they paused before the panoramic view of Veliky Novgorod and St. George’s (Yuriev) Monastery that opened before them. All agreed that the place possessed an extraordinary energy.

“That’s no surprise,” said archaeologist Yekaterina Zhukova, smiling. “The entire history of Russia's statehood is gathered right here. The whole textbook is here. This is where Alexander Nevsky scampered as a lad; it was home to Prince Oleg the Foresighted, Prince Yaroslav the Wise and St. Vladimir. It was also here that Czar Ivan the Great set up camp in the 15th century, when Novgorod was involuntarily pushed into becoming a tributary to the Princedom of Muscovy. And the most bloodstained episode of our history – the assault of Czar Ivan the Terrible on the Novgorodians, accompanied by torture and execution – also took place on the mound of Rurik’s former encampment.”

The city center came alive with a full range of festivities, all infused with a medieval flavor. Ancient barques moored at the river by the medieval kremlin. The replica ships hardly differed from those in which the ancestors of today’s Novgorodians sailed the waters from the Baltic Sea to Byzantium. The most distant guest among the flotilla of historic vessels was a Varangian-type longboat named “Forkome.” It had sailed to Novgorod from the small Swedish town of Norrtälje, covering 745 miles of the former trade route that led “from the Varangians to the Greeks.”

The pedestrian bridge across the Volkhov that joins the city’s kremlin to the site of Novgorod’s medieval market center was crammed with people in the medieval garb of Novgorod’s heyday. It has become a tradition among locals to wear the national costume on holidays that mark historic events.

“Oh no, no clogs or rough-woven fabrics!” exclaimed Anna and Sergei Prokopovich, a young Novgorodian couple dressed up for the festivities, with their two-year-old daughter Ksenia in tow. “That might have done in other parts of Europe back then. But here in Novgorod, people were already sporting leather shoes; they were dressed to the height of finery!”  All three were dressed in perfect medieval costumes, as though they had just walked off the set of a period film.

“Remember, Veliky Novgorod was an important trading center! That’s why most people have come to the bazaar today. Did you know that Novgorodians mastered beekeeping much earlier than the rest of Europe?” said a lady in a red headpiece. She had brought her honey to the fair, all the way from her own apiaries in the Novgorod countryside.

Restoring the ancient city of Rostov

Alongside the honey stalls, other goods were laid out at the fair: apples, potatoes, forest berries, fresh milk, and even live animals, including rabbits, chicken and quail. Here, too, craftsmen such as blacksmiths, weavers, and lace-makers laid out their ancient goods, which included traditional tableware made from birch-bark. Even the “Monomakh Cap” – the ceremonial crown of medieval Russian monarchs – had been specially reconstructed out of fruit, vegetables and bright autumn leaves for the occasion.

Master bell-ringers came from all over Russia to showcase their skills at the festival. Audiences gathered around the belfry of St. Sophia’s Cathedral in the ancient Novgorod Kremlin, to delight in the mastery of the bell ringing and enjoy the peal of bells that rang through the air of Veliky Novgorod – just as they had in days of yore.