Restoring the ancient city of Rostov 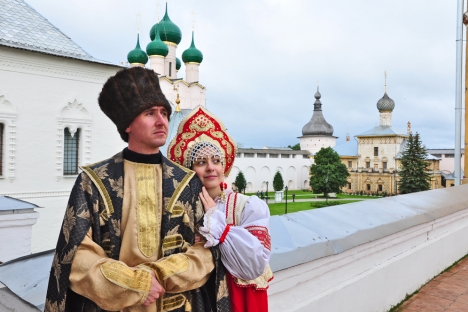 Rostov the Great is the applicant for inclusion in the List of the World Heritage of UNESCO, and in 1999 it has come in the programme of 100 monuments requiring for rescue, carried out by "Fund of world monuments." Source: Anna Solovyeva

One of Russia’s most ancient cities – Rostov the Great – marked its 1,150th anniversary and launched celebrations for the anniversary of Russian statehood.

It is no accident that these two dates are being celebrated at the same time. Rostov was first mentioned in the Primary Chronicle for the year 862. In this year, the Varangian brothers were invited to Rus.

Rostov, with its capital in Lagoda, soon became part of Ryurik’s state. From the end of the 10th century, Rostov was the center of the Rostov diocese. From the 11th century on, it was the central city of the Russian princes’ north-eastern possessions – the place that became the foundation of modern Russia. Yaroslavl, Pereslavl-Zalessky, Vladimir, Belozersk and even Moscow were built on the lands of the once vast Rostov-Suzdal princedom.

View the gallery: Rostov the Great celebrates its 1150th anniversary

The importance of Rostov is not as great today as it was centuries ago – it is a small district center with a population of just over 30,000 people. Still, the dust of the ages is carefully preserved here. In fact, preservation is something of a tradition in Rostov.

The first people to make efforts to preserve monuments here were local merchants in the 1880s who bought the once sumptuous building of the Metropolitan’s residence. The building had been abandoned after the Metropolitan’s cathedral was moved to the larger, principal city of the province, Yaroslavl. If not for the enlightened merchants of Rostov, who built a museum of church antiquities in the bishop’s former residence, the world famous monument that is now known as the Rostov Kremlin would most likely not exist today in its original form.

Since then, the magnificent ensemble of the bishop’s court, which includes six churches and numerous auxiliary buildings, has fallen under state protection. Moreover, this monument, which was preserved at one time by the wise people of Rostov, has today become a real support for the city – a magnet for tourists and a source of development of Rostov itself.

Substantial restoration work done on Rostov’s Kremlin, in preparation for the 1,150th anniversary of the city. Finances were tight, though – as the anniversary of Russian statehood approached, Rostov had counted on more solid involvement from the federal budget in the restoration of its monuments.

The earliest building to be part of the metropolitan’s residence ensemble – the Cathedral of the Assumption (1508–1512) presently requires enormous financial investment. Very similar to its namesake in the Moscow Kremlin, this majestic structure was handed over to the church twenty years ago, but no large-scale restoration work has been done there.  As part of the “Russia’s Culture” program, the cathedral’s façade was restored on the eve of Rostov’s anniversary, but there is still no end of work to be done inside. On the other hand, restoration work has been virtually completed on the famous bell tower and its 35,000-pound bells. By the end of the year, promises head of Rostov Yuri Boiko, the city’s Kremlin will stand in its full glory once again.

Unfortunately, the main “sore tooth” in Rostov – the Stable Yard, the only such building surviving in Russia from the 17th century – still remains in a depressing state. Once a two-story building standing at the entrance of the Kremlin, it is now a shocking ruin. Here too, however, there are grounds for optimism – this monument of federal-level significance has been included in the Ministry of Culture’s program, and the first 15 million rubles ($478,000) have been allocated to its restoration. 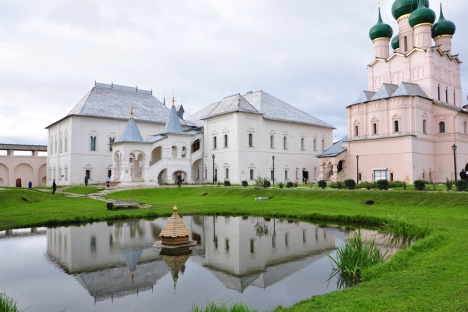 But Rostov is more than just a collection of architectural, cultural and historic monuments. Rostov is a living, developing city trying to keep in step with modern times.

Owing to resources allocated from budgets at various levels for anniversary preparations, the roads in the city have been repaired. A sewage pumping station has been built, the district hospital and schools have been repaired, and refurbishment work has been done on the city park, where a never-before-seen marvel in Rostov has appeared – an esplanade on the shore of Lake Nero. So far it is only 985 feet long; but, for a city whose “esplanades” (as Governor Sergei Yastrebov once put it) were “goat tracks along which the local fishermen would risk their lives to get to the water,” this is an enormous achievement.

Paving slabs have been laid on the central streets, street lighting has been repaired, and benches and metal waste bins have been installed everywhere. The façades of housing blocks have been refurbished, largely at the expense of the owners. Entrepreneurs are buying buildings, repairing them and opening shops, hotels and restaurants in them.

“It’s a typical situation: an entrepreneur rents or buys a ‘dead’ area – former merchants’ mansions that had been made into communal flats. We are helping to rehouse some people under state and regional programs, and the owners are returning to these houses, which is radically changing the atmosphere of the area – everything’s been freshened up, flowers have been hung up, and businesses are being set up here. The center is almost entirely made up of architectural, historical and cultural monuments. But the entrepreneurs are going to additional expense, going through all the bureaucratic procedures; this vanguard has followed behind us, and some of them are even ahead of us,” city head Boiko said.

How to reach Rostov

Long-distance trains, fast electric trains and suburban electric trains with changes can all bring you to Rostov. Trains for Rostov the Great depart from the Yaroslavsky rail terminal in Moscow. The journey takes 3 to 3.5 hours. Rostov now has more than two dozen large and small hotels with more than 1,000 beds. You can book the hotel of your choice on the city administration’s website (in Russian).

According to the head of the city, people are ashamed “when it’s been fixed up to the right and restored to the left, but you still have dirt and run-down property.” Some entrepreneurs have therefore simply started joining forces and restoring their own façades.

“In terms of our biggest hopes, we cannot say we’ve achieved everything. But as far as making the city comfortable and attractive to tourists is concerned, we’ve simply taken an enormous step forward. The anniversary means we’ve been able to modernize the city infrastructure and lay the groundwork for rapid growth in the tourism industry, in terms of hospitality and accommodation. This will develop more and more,” said Boiko.

Incidentally, although Rostov has scarcely marked its 1,150th anniversary, it has already started preparing for another important date – 2014 will be the 700th anniversary of the birth of Sergius of Radonezh. Father Sergius was born near Rostov, giving his modern-day compatriots an additional chance to tackle a few more problems in the city.