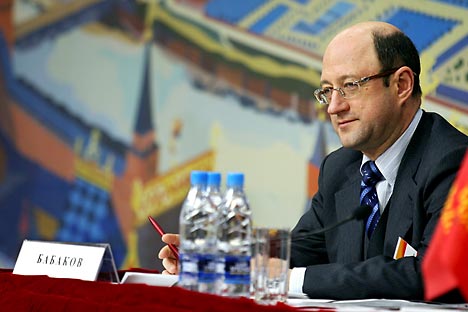 Aleksandr Babakov: "The Russian-speaking community in the United States has been estimated at between 2.5 million and 4 million people, according to various sources." Source: ITAR-TASS

How is life treating Russians living abroad and what sort of challenges are they facing there? How often do they come back to Russia? How efficient is the program for promoting the return of compatriots living abroad?

RBTH speaks to Aleksandr Babakov, the special envoy of the Russian president about groups of Russian nationals abroad.

Russia Beyond the Headlines:The World Congress of Compatriots is held on a regular basis. The next forum is scheduled to take place in St. Petersburg in late October, while Moscow will play host for the first economic forum of compatriots on Oct. 1-2. Why hold this event now? What is the potential for cooperation between Russian businesses and the businesses of Russians living abroad?

Aleksandr Babakov: The World Congress of Compatriots is the supreme body of delegates that facilitates engagement between compatriots and the state authorities of the Russian Federation. The Congress is held at least once every three years. This year, the fourth congress is scheduled to convene in St. Petersburg on October 26-27.

Meanwhile, as far as I know, the economic forum of compatriots is arranged by the government of Moscow – specifically, the city’s department for foreign economic and international relations. The objective of the forum is to promote mutually beneficial cooperation between Russian businesses and the businesses of citizens who live abroad, with a view to engage their potential and experience and further Russia’s national economic interests in other countries.

The participants are expected to address a variety of issues, including instruments for creating a positive image of Moscow as an international financial, economic and cultural center.

Involving compatriots in Russian economic projects is gaining importance and becoming a priority in our policy on the overseas diaspora. Many of our former residents are very successful businessmen in the countries where they currently reside. Russia is interested in involving them in the development of their historical homeland.

RBTH: In 2006, Russia adopted a state program to encourage the voluntary return to Russia of nationals living abroad. Has it been effective? How many citizens have actually returned to Russia?

Most potential participants in the program currently reside in Kazakhstan, Uzbekistan, Moldova and Armenia. There is also a substantial immigration potential among Russian nationals in Kyrgyzstan, Tajikistan and Ukraine. Compatriots living in Georgia, Azerbaijan, Belarus, the EU (Germany, Latvia, Lithuania, Estonia), Israel, the United States and Bolivia, are also showing an interest in the resettlement program.

Currently, 40 regions out of 83 are involved in the program. A large proportion of citizens that return to Russia choose to reside in Central Federal District. The Lipetsk and Kaluga Regions are especially popular.

At the same time, encouraging citizens to come to the Far East and Siberia is a priority for the program.

RBTH: How does the new version of the program that President Vladimir Putin signed on Sept. 14 differ from the original one?

A.B.: First of all, this program will not be limited in time, while the current program is supposed to terminate in late 2012.

The new program extends the range of activities for its participants. The program will involve not only compatriots working under employment contracts but also students at Russian universities, as well as people engaged in business, investment and farming.

The new version of the program has also redefined the status of its participants: after taking out a certificate, such persons will enjoy the status for not more than 36 months.

Finally, the new program provides a clearer list of relatives included in the family of a program participant.

In general, the new state program offers more opportunities for compatriots to exercise their rights to return to Russia, while being more effective and better orientated.

RBTH: How many organizations of Russian nationals are there in the United States? Does the Russian budget offer them financial support?

A.B.: Organizations of compatriots in the United States enjoy the same rights and opportunities as any other organization in other countries.

Most Russian-speaking U.S. residents live in New York, California, Florida, New Jersey, and Pennsylvania. More than half of them live in the cities of New York, Chicago and Los Angeles. Of the total number of Russian nationals living in the U.S., 65 percent are Jewish, 15 percent are Russian, and 20 percent are of other nationalities of the former Soviet Union.

There are no bilateral agreements on citizenship, social security, culture, or education concerning Russian nationals in America, because neither side recognizes or denies dual citizenship. The United States does not recognize Russian university degrees (63 percent of immigrants from Russia have degrees).

There are many groups of nationals from Russia and elsewhere in the former Soviet Union. Unfortunately, older organizations of compatriots (the Congress of Russian Americans, Tolstoy Foundation, Russian Academic Group, etc.) take a back seat because of the ages of their presidents. There are numerous Russian-speaking Jewish communities in United States that constitute part of the Council of Jewish Émigré Community Organizations.

In recent years, many successful businessmen from amongst our nationals have established closer ties with the Russian Embassy. Specifically, Igor Baboshkin, who is the founder and president of the media holding Nash Dom and chairman of the U.S. Coordinating Council of Russian Compatriots, is working hard to consolidate the Russian-speaking community.