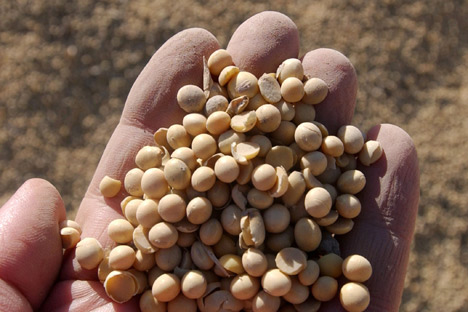 Russian consumers perceive soybeans as a cheap substitute for animal protein. Indeed, soy protein is three to five times cheaper than animal protein, though it has similar nutritional properties and a neutral taste. Source: ITAR-TASS.

In 50 short years soybeans have turned from a little-known species into a crucial crop, both in Russia and abroad.

It took soybeans just half a century to transform from a little-known bean species into a crucial crop and the dominant source of animal feed worldwide. The soybean business is finally flourishing in Russia: the market has tripled in the past several years.

The soybean is the latest discovery in global agribusiness, even though soybeans have been around for a thousand years. Soybeans only started conquering the world in the 1970s, when they went beyond the United States and China and entered neighboring regions and countries. 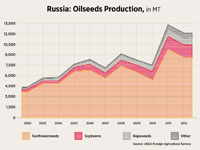 “They plowed vast savannah areas in South America to cultivate soybeans – the process can only be compared to the virgin lands campaign in the Soviet Union in the 1950s through the 1960s, and the plowing of the Great Plains in North America in the late 19th century,” said Aleksei Naumov, associate professor at the geography department of Moscow State University. “Over the past ten or twenty years, the soybean has changed the life of the Brazilian and Argentinean provinces; what were virgin lands surrounded by giant soybean fields now feature enormous agribusiness clusters that specialize in soybean processing and the fattening of cattle, pigs and poultry.”

The soybean came to Russia quite late, but its cultivation took off quickly. Soybean harvest has multiplied in the last few years, and processing has expanded significantly. A whole new business has emerged in Russia, and the outlook for supply and demand in this new soybean market is positive, with opportunities for investors likewise plentiful. According to the Interagency Agricultural Projections Committee, the demand for soybeans will grow more than 20 percent in the next decade; soybeans will eventually outsell wheat once and for all. The sheer scope of success of soybeans is so impressive that they have become the world’s leading crop by growth in planted areas.

What does the weather mean for Russian agriculture

Russian consumers perceive soybeans as a cheap substitute for animal protein. Indeed, soy protein is three to five times cheaper than animal protein, though it has similar nutritional properties and a neutral taste. However, soybeans can be used on a much broader scale in the food-processing industry. In Korea and other East Asian countries, soy milk, soy cheese, or tofu and soy meat cubes are elements of the national cuisine. Soy protein is also used to improve the structure, color, and flavor of foods, as well as to produce froths, jellies and emulsions.

The bulk of soybean harvests are used in the feed industry rather than for making food: Some 80-85 percent of soy is processed to make animal feed. Back in Soviet times, soybeans were cultivated in the Far East on a small scale, but in the 1990s, local soybean faming almost disappeared. The breakthrough of the soy business was triggered by the development of animal breeding in the 2000s, which was promoted by investment projects initiated under Western business models. Investors planned to produce high-yield breeds that required modern management and feed. “In the mid-2000s, soy feed was hardly produced at all in Russia,” a specialist with Abercade consulting agency said. “Currently, soybeans account for slightly less than one-third of crop production in value terms.”

Stock-breeders’ demand is well beyond the capacity of Russian farmers, thereby turning Russian into a major importer of soybean meal in the middle of the 2000s. Soy became a profitable crop then, and Russian soybeans were sold at real market prices on international exchanges. “The profitability of soybean cultivation in Russia largely depends on the price in international markets, but it is normally more expensive than grains or oil-producing crops,” said Irina Kuguchina, leading expert at the Institute for Agricultural Market Studies. “For instance, based on our estimates, in 2011–2012, the profit margin of soybean cultivation in Central Federal District turned out to be 30 percent above that of sunflower cultivation.”

Since 2004, areas under soybeans have been growing rapidly. The Far East is the leading producer of soybeans in Russia, with the Amur Region alone accounting for about half of the country’s harvest. Most of the beans undergo primary processing locally, at two fat-and-oil enterprises – Blagoveshchensk-based Amuragrotsentr and Irkutsk fat-and-oil factory. Some Far East raw soybeans and soybean meal are supplied to the European part of Russia.

The European part of Russia was unmindful of soybeans during Soviet times. The situation has reversed in the last five years, mostly due to the construction of an oil-extraction plant in Kaliningrad Region – a gigantic facility by Russian and European standards. Its owner, the transnational company Sodruzhestvo, managed to create a self-sufficient business with a powerful logistical component. Sodrugestvo has turned into the leading player in the Russian soybean market, thanks to its favorable location near the port in a special economic zone, the scope of business and the contributions of its shareholders. The Sodruzhestvo plant is capable of processing up to 1 million tons of beans annually. Additionally, the company sells imported beans, thus meeting about three-quarters of the market demand in European Russia.

First published in Russian in Expert.