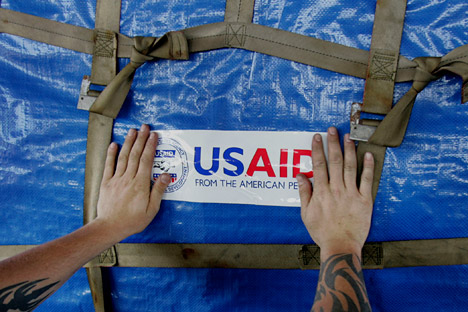 The USAID mission in Russia came to an end. Source: AP

Today, as a result of a decision by the Government of Russia, the USAID Mission will discontinue its activities in Russia. We regret this decision.

{***USAID leaves a remarkable legacy of achievements in Russia***}

Over the last twenty years, the USAID Mission in Russia has worked with Russian government officials and Russian non-governmental organizations to achieve a remarkable record of success.

USAID programs, always developed in cooperation with Russian partners, have contributed to improving public health and combating infectious diseases, addressing child welfare issues, protecting the environment, developing a stronger civil society, and modernizing the economy. Most recently, USAID has helped to facilitate contacts between our two governments and societies in many of the working groups of the Bilateral Presidential Commission.

The examples are numerous. Working with Russian officials in Krasnodar during the disastrous summer 2010 fires, USAID arranged for the delivery of 225 pieces of emergency equipment to the Russian Ministry of Emergency Situations to help extinguish the massive forest fires that remain a recent memory.

In the area of health, USAID’s work supported the broad spectrum of the Government of Russia’s own priorities, such as increasing treatment success rates for tuberculosis and ensuring that Russian health care providers adhered to international best practices.

USAID was here helping with the environmental clean-up of the Amur River immediately after a major chemical spill.

USAID also collaborated with effective Russian non-governmental organizations including business associations from across the country that are dedicated to increasing transparency and exposing corruption. Many of these Russian partners also work with the Government of Russia’s own Open Government initiative.

USAID also contributed to the efforts of these Russian partners in the struggle against child exploitation and trafficking in persons.

In its essence, USAID mostly facilitated the exchange of information and ideas. In other words, USAID supported education and knowledge, be it by providing technical experts to the Ministry of Finance from the early 1990s through 2011, or more recently by providing support for seminars, exchanges, and publications from all kinds of learning institutions and civil society organizations. Many Russian government officials, as well as leading scholars, business executives and civil society leaders have been the beneficiaries of this knowledge exchange.

USAID has been careful never to take sides in Russia’s internal political or economic debates, but instead have provided technical assistance to those helping to strengthen the rules of the game for political and economic development. USAID and its partners have not provided direct financial support to political parties, movements, or individuals in Russia. In the programs in which we shared lessons from the experience of the U.S. in political party development, USAID’s partners have invited all Russian parties to participate, giving them all an equal opportunity to do so.

Abroad, USAID and the Government of Russia joined efforts to deliver concrete results in numerous areas, including eradication of polio in Central Asia and the rebuilding of southern Kyrgyzstan after the horrible violence there in 2010. All these efforts were the product of interaction between Russian and international specialists, funded through USAID, for the benefit of all Russians.

Many people have asked me whether USAID’s departure will mean an end to our support for these important initiatives. It will not.

Our relationship with Russian partners – in both the government and private sector – continues to offer promising avenues to address our joint challenges. We will look to the Russian government to build on our investments in maternal health, disabilities, combating human trafficking, the environment, and wildlife protection, among other fields, and we will continue to encourage private sector actors – Russian and American – as well as private foundations to also provide more support for these activities.

And our commitment to supporting democracy, human rights, and the rule of law remains steadfast. Although USAID will cease to function in Russia, the Obama administration will continue to look for new ways to work with our partners in Russia, and build on the legacy of the USAID mission in Russia.

International Memorial is the leading organization in Russia working to broadly educate and preserve the memory of political repressions during the Soviet Union, as well as provide protection and support to human rights victims.

With USAID’s support, in 2010 Memorial opened its state-of-the-art museum, archives and collection placement ensuring free access to historical information in Russia, which had been forbidden for so long. This facility became a platform for discussion clubs, research, meetings for activists, researches, Moscow based and regional organizations addressing historical memory and rights protection.

In addition, Memorial maintains information on human rights violations within the territories of the former Soviet Union, undertaking painstaking verification and analysis of collected material. It publishes this material in regular reports, which are widely used by both international human rights organizations, as well as large international governing institutions, such as the UN, OSCE, and Parliamentary Assembly of the Council of Europe.

In addition to just data collection, Memorial and its network of organizations provide social and legal counseling for victims of human rights abuses, particularly refugees and displaced people living in many regions throughout Russia.

At the World Health Organization (WHO) in Geneva, the U.S. and the Russian Federation signed a Protocol of Intent for the global eradication of polio, building on the foundation of partnership established with President Obama's reset in relations with Russia.

The Protocol outlines several areas of joint U.S.-Russian activity, including participating in and monitoring of polio immunization campaigns in third countries. Monitoring visits under the auspices of WHO’s Supplemental Immunization Campaign could begin as early as spring 2011, with Tajikistan as the first target country. (USAID also cooperates closely with the Russian government on programs to combat HIV/AIDS, tuberculosis and other infectious diseases.)

U.S. and Russian Health Specialists Team Up Against Polio in Central Asia

May 23-27, 2011 - Experts from the U.S. and Russia recently spent a week in Tajikistan and Kyrgyzstan monitoring and observing national polio vaccination programs.

This joint effort was the first activity under a recently signed U.S.-Russian agreement to eradicate polio, signed by Administrator Shah in January.

Monitoring teams consisted of representatives of USAID, CDC, the World Health Organization, and the Russian Ministry of Health; they visited a number of regional health facilities and accompanied local mobile immunization teams door-to-door in order to identify strengths and gaps in current immunization campaigns and provide suggestions for improvement.

As a member of the Joint Committee, USAID worked with Russian Ministry for Civil Defense, Emergencies and Elimination of Consequences of Natural Disasters (Emercom) to exchange experience in the area of emergency response and supported Emercom in its preparation to the UN classification exercise that will help Russia to be better positioned to coordinate disaster assistance with other countries, and be recognized as having state-of-the-art procedures and practices, including heavy airlift capacity, mobile field hospitals, and extreme cold-weather rescue capabilities.

USAID-funded the Amur Initiative was launched in 2007 in response to a November 2005 chemical spill in Jilin, China that polluted the Amur River, affecting over 5 million Russians. The “Amur Initiative” was a project to monitor water quality in the Amur River basin and offer local residents access to clean, filtered drinking water through the drilling of new wells and the installation of modern, ultra-violet purification equipment. As a result of this project, over 50,000 rural citizens in the Amur River basin got access to clean and safe drinking water. The rate of alimentary diseases in all twelve project sites was reduced by 20% and in four villages water quality became in compliance with State Sanitary Standards for the first time ever.

USAID programs catalyzed basic changes in TB control in Russia from the traditional sub-optimal approach to internationally-recognized approaches to TB diagnosis and treatment based on Directly Observed Therapy Strategy (DOTS). USAID, in cooperation with World Health Organization (WTO), helped to introduce international concepts of drug and vaccine production and management, both to industry and the public health sector.

This led to an increase of TB treatment success rates in the project’s target regions of up to 86% which is close to the international gold standard, as compared to the national average of 58 percent in other regions.

USAID’s support for children with disabilities

Perspektiva is the leading champion of disability rights in the Russian Federation, with no other non-governmental organization coming close to matching its achievements in this sphere.

With 27 regional partners, it has far-reaching impact. Unlike many NGOs, Perspektiva has been able to work effectively with the Government of Russia at the national, regional and local levels, while maintaining its independence as a rights advocate.

For example, its collaboration with the Moscow Department of Education resulted in the Law on Inclusive Education being adopted in April 2010. As a result, over 90 schools and 95 kindergartens in Moscow adopted the inclusive system of education. Also in no small part due to Perspektiva’s long-term efforts, the UN Convention on the Rights of Persons with Disabilities was signed into law in May 2012 by President Medvedev.

Perspektiva activities also include another important area of work – employment of people with disabilities. Perspektiva has created an Employment Agency and public reception office in Moscow, which allows citizens with disabilities to receive qualified legal assistance and to be further employed by state owned enterprises as well as by private businesses. Perspektiva has a database of potential employees and disabled candidates, which helps employ 400 people annually.