Salt settlement in the Kostroma forest 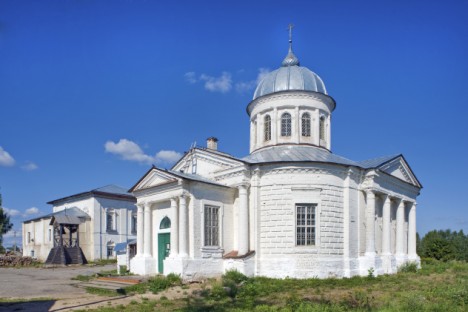 Soligalich is sleepy, picturesque provincial town located on the Kostroma River some 130 miles north of the regional center of Kostroma.

The road to Soligalich cuts a wide swath through the dense forests of northern Kostroma Province – past the azure Chukhloma Lake, with its restored Monastery of St. Avraamy Gorodetsky, past a few villages of tenuous existence until it finally arrives at this sleepy, picturesque provincial town located on the Kostroma River some 130 miles north of the regional center of Kostroma.

The earliest reference to Soligalich dates from 1335. Its name derives from the word for salt, and from the 14th to the 18th centuries it was known as a major producer of that essential commodity. As elsewhere in other medieval “salt settlements” of the Russian north, such as Solvychegodsk and Totma, the salt was extracted from brine pools and boiled in primitive refineries. The production of salt in Soligalich waned by the 19th century, and the briny waters formed the basis of a modest health resort that arose in the 1840s.

The town’s other major resource was nearby limestone quarries, which were used not so much for building stone but as a source of slaked lime for mortar, essential for the construction of Russia’s expanding cities. Bulk transportation for the town, which also shipped timber and other forest products, was provided via the small Kostroma River, merging with the mighty Volga at the city Kostroma. Although the river connected the town to the wealth of the Russian heartland, Soligalich for centuries considered itself closer to ancient towns of the North, particularly Velikii Ustiug and Totma.

From its earliest years, the spiritual and cultural center of Soligalich was the Resurrection Monastery. Indeed, the town itself is considered to originate with the founding of the monastery in 1335 by the monk Makary Unzhensky (1349-1444) with the patronage of Fyodor Semyonovich, ruler of the principality of Galich. In the early 15th century, the monastery played an important role in consolidating the power of church and state during a turbulent period in Muscovite history. The building of an earthen fortress across the river from the settlement also provided defense against raids by Kazan Tatars, who undertook a siege of Soligalich in 1532. The town’s heroic defense was attributed to divine intervention and a vision of the revered St. Makary.

Ivan the Terrible’s conquest of Kazan in 1552 eliminated the threat from the southeast, but Soligalich was thoroughly devastated during the Time of Troubles, a decade of social and political conflict between the death of Tsar Boris Godunov, in 1605, and the establishment of the Romanov dynasty in 1613. Despite destruction and depopulation, Soligalich was on the way to recovery by the 1630s. The most visible expression of that renewed prosperity was the construction of large brick churches during the latter part of the 17th century. Although closed and vandalized during the Soviet period, the two churches of the former Resurrection Monastery are among the most significant monuments of Soligalich. Especially notable is the graceful octagonal bell tower of the Resurrection Church (1660s), one of the best examples of that form in the 17th century. Unfortunately, serious structural damage is noticeable in the bell tower walls.

The other major monument of Soligalich is the vast cathedral built for the Convent of the Nativity of the Virgin, located near the Resurrection Monastery. The Nativity Cathedral was begun in 1668 with the patronage of Tsarina Mariia Ilinichna, first wife of Tsar Alexei Mikhailovich and descendant of the illustrious Miloslavsky family. The tsarina wished to express her personal devotion to her native  Soligalich region with the endowment of a large church, but her death in 1669 impeded construction as did the demands of other projects in the Russian north; the brick masons of Soligalich were in much demand during this period. Construction proceeded haltingly, and over a century later, at the end of the 18th century, the gargantuan church still had no roof. A small part near the bell tower was enclosed for worship, but the basic structure finally completed only in 1805.

The imposing exterior, which has been recently restored, is matched by the grand icon screen created in 1826-27. The scale of the carved frame, filled with icons, is breathtaking, yet the miracle of its preservation is tempered by the extent of its neglect. Father Alexander Smirnov, priest of Soligalich parish, has a deep sense of concern for the future of this extraordinary work of art. Long-standing neglect has also damaged the large wall paintings, executed in 1881. The amount needed to restore the main interior (there are also side chapels) is far beyond the means of a small parish, and restoration experts are divided as to the proper means to restore the monumental icon screen. This unique ensemble of Russia’s spiritual and artistic culture is very much open to question.

The town’s central part, easily within walking distance, still preserves much of the ambience of a 19th-century regional commercial center. Its neoclassical wooden trading rows flank the central (formerly market) square, which is graced by largely abandoned parish churches—one of which is active. Neighborhoods of wooden houses still exist and contribute to the charm of this small provincial jewel. One of the houses along the Kostroma River has recently been converted into an excellent guesthouse, a promising example of local initiative.

At present Soligalich survives as an administrative center, as well as a major producer of cement (from the limestone quarries) and forest products. It would seem that little has changed since the middle ages, but that continuity has its virtues. With proper management and preservation, perhaps Soligalich will discover new treasures in an ancient legacy.