The leader of Russia’s lower house speaks on controversial issues 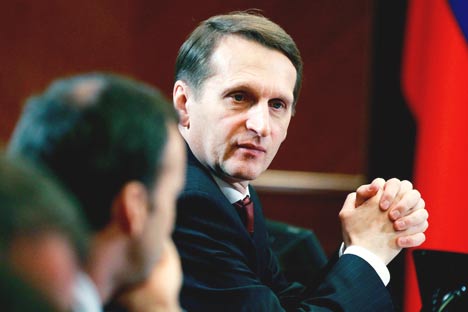 Chairman of the State Duma Sergei Naryshkin: From a moral point of view, the behavior of Pussy Riot was disgusting. I am very disappointed that the members of the group have not apologized. Source: ITAR-TASS

The State Duma has become the prime source of political news in recent months, with the passing of high-profile laws, the opposition’s “work-to-rule” and the stripping of one deputy’s parliamentary immunity and another’s seat. Several more controversial laws are in the works, including a ban on civil servants owning property abroad. Russian Reporter correspondent Andrei Veselov discussed all of these issues with State Duma Chairman Sergei Naryshkin.

Andrei Veselov: The most talked about recent political event is the “case” of now former deputy Gennady Gudkov. It is hard not to notice that he was stripped of his mandate in the wake of his protest activities. Has the Duma set a dangerous precedent by effectively stripping a deputy of his term in office because of his political views?

Sergei Naryshkin: Before I answer your question, let me note that a journalist must be objective and unbiased. Take a bit of friendly advice from me: do not look for coincidences where there are none. Gennady Gudkov is a prominent figure in the opposition movement. He has been expressing his opposing political views freely for many years now and has long been taking part in various campaigns, some of which he organized himself. All this time, he met with no obstruction. And no one is obstructing him now. As for his parliamentary seat, it was taken away on entirely different grounds. Article 4 of the law on the status of deputy forbids deputies to be members of management in commercial organizations or to engage in entrepreneurial activities. The materials submitted to the relevant Duma commission show that Gudkov was engaged in just such activities. Parliament confirmed it.

A.V.: Granted. But is Gudkov the only one? Aren’t other deputies involved in commercial activities of one sort or another?

S.N.: First of all, this fact has to be established. You will perhaps know that I have been asked by the heads of some other parties to verify whether some deputies were engaged in entrepreneurial activities. I have instructed the relevant commission to check this information. The commission is working. Not a single submission will be ignored.

A.V.: What if the commission finds irregularities on the part of other deputies, including those from the United Russia party – will they face the same tough sanctions as Gudkov?

S.N.: The house will proceed in strict accordance with the law.

A.V.: This summer, the State Duma passed a law under which nonprofit organizations that receive money from foreign sources will be labeled “foreign agents”. A lot of human rights activists consider this wording to be insulting. Why did the Duma choose this rather harsh wording that sounds like an accusation of espionage?

A.V.: Still, the harsh language is an issue that cannot be dismissed. Why wasn’t a more neutral word chosen?

S.N.: The term “agent” is commonly used all over the world and, in my opinion, is fairly neutral. People are not scared of the phrases “sales agent” or “tax agent,” are they?

A.V.: Before the Duma are pending amendments to the law On the subject of Civil Service. These would forbid bureaucrats from owning property abroad. Do you feel that this is an overtly populist move?

S.N.: The draft law is the subject of a lively discussion, and not only in the Duma: deputies, scientists and the expert community have been expressing different views on the matter. The discussion is ongoing and I hope that an optimal solution will be found. But I am sure that the goals set by the proposed legislation cannot be achieved with the help of the instruments proposed in the draft law.

A.V.: The party that is in power today is often accused of cronyism. The allegation is that all the important posts are held by people whose paths, at one time or another, crossed with that of Vladimir Putin. Do you think that this cronyism exists?

S.N.: The term is inappropriate. In politics they use such categories as “brothers-in-arms,” “like-minded people,” “colleagues” or “members of the team” that have their leader. Think of the French presidential election. The new president has brought his team with him, the government has changed and the presidential administration has changed. The people who have come are close to the new president in mindset and have probably worked with him before. But they are also professionals in their own fields. This is a normal process, a normal procedure. It’s the same in Russia.

A.V.: The topic that has been discussed by half of the world over the last six months, from Madonna to Bundestag deputies and the Mayor of Reykjavik, is the Pussy Riot “case”. Do you as a citizen and lawmaker consider the sentence to be legitimate and fair?

S.N.: From a moral point of view, I think their behavior was disgusting. I am very disappointed that the members of the group have not apologized. As for the sentence, I would rather not give my assessments. You are interviewing me in my capacity as Chairman of the State Duma. I think that in my position it is inadmissible to assess the court’s actions.

First published in Russian in the Russky Reporter magazine.