What to do with St. Petersburg’s cityscape? 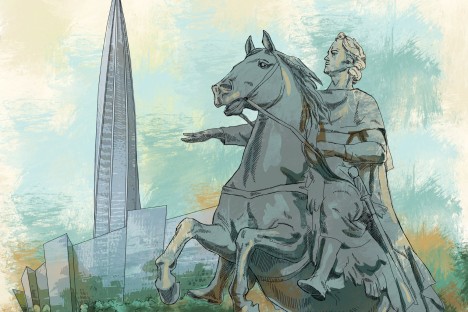 The urban planning dilemma in St. Petersburg lies between the extremes of rebuilding from scratch or preserving everything. Both strategies seem to lead to a dead end. So far, authorities have astutely advanced their own plans, while city preservationists have struggled to preserve the city's unaltered appearance.

The first thing that strikes any visitor to St. Petersburg – especially if the visitor takes an interest in modern architecture and design – is the absence of contemporary architecture.

St Petersburg: A cultural blast from the imperial past

Although this may be a little mystifying, the city center’s appearance is preserved in its historic form. This is exactly what the majority of visitors come here for in the first place – to see the magnificence of a former empire's capital, as it was founded by Tsar Peter the Great. Very few tourists are even aware of the battle for an unaltered St. Petersburg that is being waged here by its citizens.

It is a different matter for experts in the field of cultural preservation. At a summer meeting of UNESCO that took place in St. Petersburg, a coalition of members from Save Europe’s Heritage, MAPS (Moscow Architecture Preservation Society) and Living City released a report entitled “St. Petersburg – Heritage at Risk.” The report was written along the lines of similar reports released concerning Moscow and, subsequently, Samara.

Marcus Binney, an architectural correspondent for The Times and president of Save Europe’s Heritage, says that the city itself is at a crossroads.

“From one side, we hear sweet and seductive voices beckoning towards the fast-paced Asian model of development, which has scarcely any city-building restrictions, and comes with the benefits of the glamour, prosperity and rapid growth of skyscrapers. From the other side come the powerful clamor of Western civilization and the maxim of Augustus Caesar: Rome wasn’t built in a day,” wrote Binney.

Western experts think that St. Petersburg’s problem is obvious. In the report, historian Colin Amery laments the disparity between the touristy central streets and the crumbling, poorly-renovated buildings on the adjacent streets.

At the same time, Adam Wilkinson, director of World Heritage Edinburgh, cautions against the kind of approaches adopted to restore the dilapidated neighborhoods of many other European cities, where the process began considerably earlier.

“It's very tempting for city authorities […] to recommend that residents of these areas be relocated to new developments with better living conditions, only to renovate the old properties and sale them off.  It just doesn't work,” Wilkinson wrote. “Just look at any of the British cities where they’ve tried to do this in recent years, and what you’ll see is major disruptions to a normally-functioning city.”

There are some instances in which the way something is done cannot be separated from the final result.

If the historic city of St. Petersburg is to be reconstructed without losing its true and authentic appeal, then there is only one way to do this. Historic buildings must be preserved to the greatest possible degree, but if some new building is necessary, it should be built properly and without trying to hide the fact that it is new.

There are some excellent examples of people using this approach today. Take, for example, the Quattro Corti business center, in which Italian architects built modern courtyard spaces behind the preserved facade of a historic building. This is, unfortunately, a rare example.

Overall, there are very few instances of modern architecture in St. Petersburg that could claim to be relevant to the present day. There are buildings by Sergei Choban, the above-mentioned Quattro Corti complex, and projects completed by the Vitriuvo & Sons design bureau. This is not much for a city whose population tips the five million mark.

While the city lacks modern architecture, there is certainly an abundance of other styles in its place.

The most odious buildings can be seen from Palace Embankment, behind the former Leningrad Hotel (now St. Petersburg Hotel).

Here stand the monstrous Aurora and Mont Blanc housing developments; alien invaders from the city suburbs that have already wrecked the historic skyline.

Today, it seems as though the threat of further such development is over. Even the high-rise Gazprom building – a huge skyscraper planned for construction on the Okhta River at the edge of the historic center – is no longer a menace. This building, which was planned to be built on the site of several medieval fortifications and threatened to ruin the city’s ancient panorama, has now been relocated to Lahti on the banks of the Gulf of Finland.

Despite this, concerns of local residents only continue to grow.

In August 2012, a group of experts wrote a letter to Governor Poltavchenko, warning that “all honest professional people and specialists are convinced that there will be an inexorable wave of high-rise buildings in protected areas and designated heritage zones, including the skyline of such iconic city symbols of St. Petersburg as the Peter and Paul Cathedral and the Rostral Columns.”

This letter was drawn up after the Gosstroinadzor commission gave the green light for construction of the first phase of the Gazprom skyscraper, which, after moving from Okhta, rose to a height of 1,640 feet. Despite objections from the public, work on skyscraper continues on schedule.

Risks arise not only from the invasion of new monoliths that fail to fit in with St. Petersburg’s image or skyline, but also from the great likelihood of an inadequate transformation of the city center.

At the end of September, an architectural competition was held for the reconstruction of two large areas of the city – the area around the Fields of Mars and near Novaya Gollandia. The competition covered important areas, but simultaneously raised many questions. There was no professional jury, no public consultation, and no prizes for winners.

It was almost as though the competition was a free consultation. It resulted in a concern about the introduction of exactly the kinds of policies Adam Wilkinson cautions against.

Are the authorities the sole bearers of guilt for this situation?

Attention should be paid to the kinds of discussions going on about development in the city itself.

There are two polarized positions that are incapable of finding common ground. Either nothing new of any kind should be built, or skyscrapers should be built and historic St. Petersburg should be turned into a “modern metropolis.”

In reality, neither of these two approaches is suitable for St. Petersburg. The excessively strident demands of the preservationists are just as dangerous as the cries to knock it all down and start again.

The city needs to be augmented with high-quality buildings that are built according to a rulebook agreed upon by both developers and architects.

Take, for example, the proposal to build the European Embankment city quarter on the current site of the Institute of Applied Chemistry. The authors of the plan – Sergei Choban and Yevgeny Gerasimov – called on various foreign and domestic architecture firms to send in their proposals for individual buildings as part of the project.

A European city is alive not when it is being conserved; rather it is alive when being used and supplemented with architecture designed by those who support ideas of European urban living. Russia has this heritage; good infrastructure will follow, along with contemporary design. And tourists will still flock here.

Vladimir Frolov is an architecture critic and the chief editor of Project Baltia.