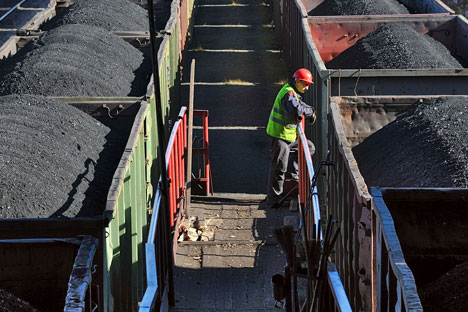 If no direct Moscow-Vorkuta tickets are available, the next best itinerary to Vorkuta involves a 2.5-hour flight to Ukhta, followed by a 14-hour train trip across the tundra. These are the legendary Gulag zones.

In the early 20th century, the Pechora Basin – the largest coal deposit beyond the Polar Circle – was discovered here.

The first miners to work the Vorkuta coal mines were political prisoners in the 1930s-1950s. Around 1953, the Ministry of Industry took over the Vorkuta mines from the Ministry of the Interior, and, in 2003, Vorkutaugol Ltd. Incorporated all of the local mines into the joint-stock metal company Severstal. Since then, the mines have been modernized: production at Vorkuta can currently match even the Kuznetsk Basin, which accounts for 60 percent of Russia’s coal output. 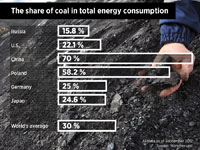 Vorkuta controls the deepest mine in Russia (3,900 feet) and the most productive mine Europe – the Vorgashorskaya.  It operates at a capacity of more than nine tons of coal per minute. Still, Vorkuta itself is only a ghost of the city that it used to be.

The construction of homes, for example, halted here in the 1970s. Who was there to build for? The city’s population was once 200,000, but has since dwindled down to more than half of that. The only reminders of the Gulags are the crosses in the memorial cemetery and the central heating and power plant, which locals claim Alexandr Solzhenitsyn built.

The city and the smaller towns around it are oases in the tundra: the scarce trees and bushes are all imported to the area. Under these conditions, the city is a transfer point, as in Soviet times. Miners tend to move to warmer climes as soon as they retire.

Coal’s share of Russia’s total energy consumption is among the lowest in the world, at 15.8 percent. The world average is 30 percent, compared to 22.1 percent in the U.S., 70 percent in China, 58.2 percent in Poland, 25 percent in Germany, and 24.6 percent in Japan. In this context, Russia could stand to increase coal production, instead of phasing down mining operations. When estimating oil reserves, specialists normally speak in terms of decades. In Russia, the currently available 193.3 billion tons in coal reserves will last the country another 500 years, granted current production rates continue. Only the United States has larger coal reserves than Russia.

At about 11 a.m., a new shift comes off the bus near the mining structure. Men smoke near the entrance: cigarettes are not allowed on workers in the mine. Workers entering the mine must, in addition to using their passes, also blow into breath alcohol meters installed on each turnstile. They will have to blow again when they leave the mine.

It is important to dress properly for the mines: warm underwear, trousers, a cold-proof vest, a coat, and a belt with a battery-operated lamp. Helmets, goggles and boots are, of course, essential in the mine. It even helps to remember how to bind your feet with foot cloths, the way it used to be taught in the military.

The foot wrap is supposed to help with blood circulation and improve foothold. Finally, no miner should go below without a 6.5-pound, thermos-like metal box; if there is smoke in the mine, the device will enable the miner to breathe for a few hours.

The elevator must go down 1,600 feet to reach the station. The elevator car must be moving quite slowly but, because of the deafening noise and vibration, it feels like a rollercoaster. The only light inside comes from the miners’ helmet lamps. One new to this sort of travel might feel ill at ease, but the miners start to play cards.

It takes nearly 40 minutes to reach the station, where the miners transfer to an overhead monorail. Two hours pass before the miners get to the site and begin their six-hour shift.

Vorkuta: recovering from its past

The crew consists of nine men, one of whom is a maintenance engineer.

The mine operates 24 hours a day, seven days a week, with three production shifts and one maintenance shift. Coal is extracted after rounds of maintenance. There are no classical coal cars anymore.

Commercial production requires a combine machine – a giant device with two rotating screw conveyors. Like a jack plane, the combine machine travels along the coal face and breaks off the coal, which falls onto a conveyor belt to be carried away. The combine operates at a rate of 980 feet per hour, producing about 3,000 tons of coal during a single six-hour shift.

The production section has its own lighting system, but the rest of the shaft is pitch-black.

“It happens that your lamp goes out,” Alexander Kruglov said. “Then you walk out slowly, hugging the wall.”

He says that there are experienced miners who cannot stay alone in that section, for psychological reasons. It looks quite ominous with its miles of passages, like Middle-earth’s “Black Chasm” at Moria. Naturally, it is a breeding ground for superstitions.

“There is a belief that you shouldn’t change your helmet,” said Kruglov. “There is a rule to replace a helmet once in three years, but many won’t hear of it.” A dispatcher on the surface monitors the location of each miner, using the wireless sensors in their lamps. The dispatcher is also capable of sending a special signal to miners, calling them to a telephone in the gateway.

A coal mine with an annual capacity of 4-5 million tons costs about 20 billion rubles ($645 million) to build. Vorkutaugol’s sales reached 35 billion rubles ($1.1. billion) in 2011, with net profit amounting to nearly 12 billion rubles ($387 million). Eighty per cent of Vorkuta coal is of an expensive, high-grade variety used to heat blast furnaces. Kuzbass, where mining costs are much lower, primarily produces cheaper “energy” coal, which is supplied to power plants and boilers.