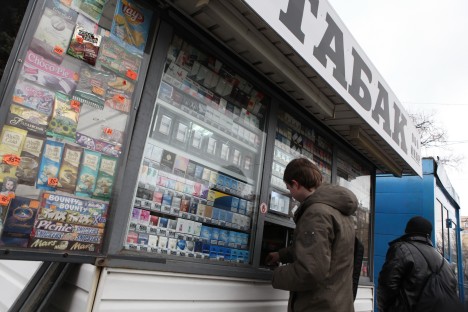 The initiative proposed by the authorities may result in the licensing of tobaccos sales, similar to the licensing regulations for the sale of alcohol. Source: ITAR-TASS

Deputies from the Liberal Democratic Party of Russia (LDPR) have proposed a strict limitation on the places where alcohol and tobacco can be purchased. The authors of the initiative are prepared for an eruption of dissatisfaction among businesses and the general public, but believe the availability of these products needs to be reduced.

Parliamentary deputies from the Liberal Democratic Party of Russia (LDPR) have introduced a bill that proposes tobacco and alcohol be sold only in specialized stores. According to the authors, the initiative would reduce the overall consumption of these products. Deputies advocating the bill hope that it will be approved by opposition factions in the Duma.

“Cases of accidents involving drunk drivers have triggered a wave of discussion about what is needed to restore order in alcohol sales. We have prepared amendments to Russian trade laws – all alcohol and tobacco is to be sold only in specialized stores, the operation of which should be subject to restrictions that are now in effect on the territory Federation subjects,” said Yaroslav Nilov, the deputy head of the LDPR faction.

The authors believe that this measure will help to prevent children from buying cigarettes and alcohol.

“If a child enters such a store unaccompanied by an adult, it will immediately attract the attention of the sales staff, who are already prohibited from selling alcohol to children,” Nilov said.

The next step, according to the LDPR deputy, may be introducing accountability for the admission of children under 18 into such stores.

In Russia, the sale of alcohol is currently prohibited at certain times of day, though tobacco products can be sold all day. Duma deputies are hoping that it will not be profitable for shops that sell both products and keep employees working the whole night in order to sell a few packs of cigarettes.

“The bill, through its economic measures, will force employers to reduce their working hours and, thus, limit the availability of tobacco products,” said Nilov.

According to ITAR-TASS, the authors of the initiative are prepared for the fact that related industries will be against the bill. Indeed, if the document is approved, alcohol and tobacco companies have promised to “rise up screaming and shouting.”

The initiative will result in the licensing of tobaccos sales, similar to the licensing regulations for the sale of alcohol. Nonetheless, retailers may still find a way out of the law. For example, large chain stores may simply open a shop within a shop on their premises.

Parliamentary representatives of the United Russia party have already put forth a similar initiative. They proposed increasing the penalties for the illegal sale of alcohol. The next step, according to them, should also be the creation of “specialized stores with special opening hours, video cameras and tight control.”

Last spring, Moscow Mayor Sergei Sobyanin developed the idea of ​​banning alcohol sold in shops located in residential buildings. On Oct. 3, 2012, the head of the city’s Department of Trade and Services announced that the idea had been rejected because the ban would have affected 2,000 sales outlets.