War to become a private affair 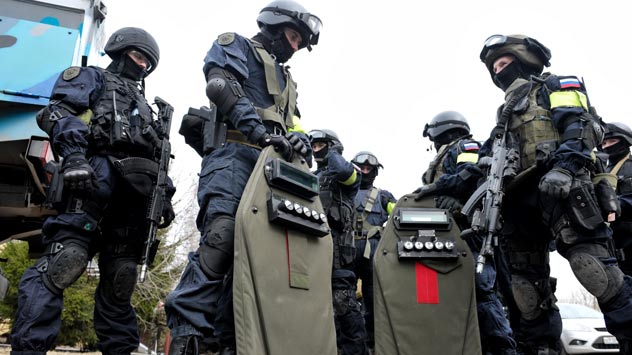 In the future, Russia's private military companies (PMCs) could become independent domestic players, free to side with any of the "centers of power" in existence at the time. Source: ITAR-TASS

The lack of a sound legislative framework in Russia has not posed an obstacle to the development of private military companies (PMCs), which have enjoyed a de facto presence in key conflict areas in the world for almost a decade.

For example, Antiterror-Orel (Anti-Terror Eagle, in English), which was set up by former Vnukovo Airlines employee Sergei Isakov under the auspices of Suleyman Kerimov, has been undertaking non-military operations in Iraq to protect facilities and escort cargo since 2003.

Moreover, the low competitiveness of Russian PMCs registered offshore is evidence of their narrow set of functions and, by international standards, minimal employee wages. Russian companies offer standard security services, while the largest players in the market of private military services have long since switched to multi-specialization, in which consulting and specialized training occupy key niches.

For instance, U.S.-based Academi (formerly Blackwater) focuses on training programs for U.S. military personnel, offering courses in shooting, fighting, and extreme driving at its own training base. Its main customer is the U.S. government.

PMCs in Israel, meanwhile, have secured a strong foothold in the consulting industry and, in particular, the alignment of security and intelligence systems. British PMCs specialize in risk management, logistics, and protection of financial infrastructure.

Thus, the focus of "military services" has now shifted to the developing word. It is common practice to subcontract security and escort services to smaller companies in high-risk areas, usually in unstable countries.

Even if they acquire legal status, Russian PMCs are unlikely to be successful in the market, which is currently monopolized by the U.K. and the United States. At present, Russian PMCs are simply unable to compete in the hi-tech industries, reducing their role to that of mere mercenary.

Moreover, Russia is not currently engaged in military operations abroad and does not need "rearguard" reinforcements in the form of private paramilitary structures.

The government's decision to farm out PMCs to existing businesses clearly shows that it is more interested in two other types of commercial military structures: corporate and ethnic quasi-armies.

The former are represented by the security services of industrial companies that operate in hot spots. They already count more "security" employees than the FSB, and, in countries where Russian corporations own facilities, they essentially function in extraterritorial mode.

The legalization of military security enterprises would allow such corporations to use outsourcing in situations that require personnel with specific skills: for example, to counter attacks by pirates.

Whereas special training of corporate security services may not be commercially justified in this instance, PMCs with a niche profile could cope with the task quickly and efficiently. Furthermore, PMCs would be authorized to build up existing security capacity.

However, in addition to corporate security services that enjoy broad autonomy in overseas operations, a commercial quasi-army could also be deployed inside Russia itself. Its scope could include security in border areas in remote regions experiencing pressure from immigration; Russia's Far East is a prime example of such a region.

Still, the commercial and tactical benefits of setting up PMCs do not alter the fact that the gradual privatization and transformation of security into an "external" service – even inside the country – is a kind of ticking time bomb. In essence, it blurs the right to commit violence, over which the state has a monopoly.

The legalization of PMCs will go hand-in-hand with an increase in illicit arms trafficking. In the future, PMCs could become independent domestic players, free to side with any of the "centers of power" in existence at the time. In fact, the situation may even stimulate another stage of neo-feudalism in Russia.

Nadezhda Sokolva is an expert at the Governance and Problem Analysis Center.