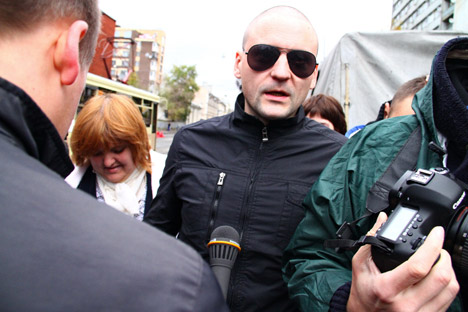 One of Russia's opposition leaders faces criminal chargers. He is accused by the Investigative Committee for preparing to stir up social unrest in Moscow and other regions of the country. Source: ITAR-TASS

After one opposition figure confessed that the May 6 rally in Moscow was funded with Georgian money, Russia's opposition movement may face serious trouble.

Leonid Razvozzhayev, an aide to State Duma deputy Ilya Ponomaryov and vocal opposition activist Sergei Udaltsov , has confessed to investigators that the massive unrest that occurred in Moscow's Bolotnaya Square on May 6 had been financed by a Georgian official, Russia’s Investigative Committee told Interfax.

The creators of the controversial footage allege that the left-wing opposition was preparing to stir up social unrest in Moscow and other regions of the country. NTV backed up its claims by showing a hidden camera recording of a conversation between Udaltsov and Givi Targamadze, chairman of the Georgian parliamentary committee for defense and security. The authors of the film assert that Targamadze had a hand in the “color revolutions” in Georgia and Ukraine, as well as in the mass disturbances in Belarus.

The information presented in “Anatomy of Protest” attracted the interest of Russia’s Investigative Committee, which subsequently initiated criminal proceedings under the clause of the Russian Criminal Code that pertains to the organization of mass protests. Udaltsov now faces up to 10 years in prison.

Sergei Udaltsov is a Russian left-wing activist, coordinator of “Left Front,” and an active member of the opposition movement. He has repeatedly been detained by police as the organizer of illegal street demonstrations and rallies. Udaltsov was identified as the chief protagonist in the documentary film “Anatomy of Protest,” which was broadcast in early October on NTV. The creators of the tape allege that the opposition was planning to organize mass riots throughout Russia.

“It was established that the voice in the documentary, which was shot with a hidden CCTV camera, belongs to Udaltsov; the meeting, of which excerpts are shown in the film, took place in the second half of June 2012 in a residential area in Minsk,” said Vladimir Markin, spokesman for the Investigative Committee of Russia.

On Oct. 17, investigators searched the apartments of opposition leaders. “The search began at around 6:30 a.m. Other protagonists in the documentary are also under scrutiny, as well as Sergei’s parents,” Udaltsov’s lawyer, Violetta Volkova, told the Russian News Service. An opposition supported noted that she was not notified by the law enforcement agencies in advance.

Udaltsov himself was unavailable for comment while the case against him was being prepared, but his posts on Twitter indicate that he was brought in for questioning by the Investigative Committee, following the search of his property. Udaltsov’s colleagues in the protest movement were angered by the actions of the law enforcement agencies.

“It is totally illogical for this footage to be used as evidence. It is directly prohibited under Russian law. The evidence was obtained illegally, without a court order, without the knowledge of the people concerned. In fact, I have doubts that the footage was actually filmed,” said State Duma deputy Ilya Ponomarve in an interview with Kommersant FM radio.

The Investigative Committee, however, considers its actions justified. “I would like to address those who think that, in Russia, it is acceptable to organize riots, and plan terrorist attacks and other acts that threaten the lives and health of the Russian people. You underestimate the professionalism of the Russian special services, and are ill informed about Russian law,” said Markin.

Opposition members have repeatedly stated that they believe the aim of the footage is to divide the protest movement, and they have promised to support Udaltsov. Those on the side of the authorities, meanwhile, warn that the repercussions could be serious. State Duma deputy speaker Sergei Zheleznyak has already called upon the opposition to decide on which side it stands.

Keeping quiet is not an option: “Either they condemn this and work together with us to investigate the criminal plots of the radicals, or they are in league with the criminals,” said Zheleznyak.

Following the release of the documentary, Udaltsov himself announced that he did not expect to be prosecuted and described the tape as a “very clumsy forgery.”

“This is a regular investigation of footage that was aired. I saw the movie. Normal people find its contents disturbing — the so-called opposition has displayed its true colors.”

“The criminal proceedings are groundless. Udaltsov is simply a nuisance to the authorities, so they’re using any excuse they can to keep his political activities in check.”