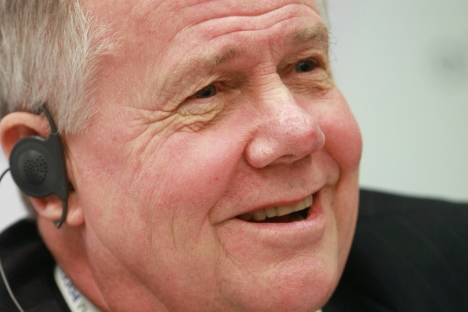 Last month VTB Group announced that it had hired one of the world’s best-known investors Jim Rogers as an advisor to the agricultural division of its capital investment division. In an interview with Expert, he talks about his sudden love for Russia and forecasts for a global economic collapse

Jim Rogers thinks that Russia is changing for the better." Source: RIA Novosti

This is probably the way that one of the most successful investors in the world should be interviewed.

Time is money, and who knows how much one hour of Jim Roger’s time is worth. Besides, he ended up sharing a lot of interesting things during his 90-minute spinning routine.

Specifically, the topic of discussion focused on his sudden interest in Russia.

On Sept. 21, VTB Group announced that it had hired Rogers as an advisor to the agricultural division of its capital investment division. Expert wanted to know what it was that made the investor accept the offer.

Expert: Jim, how did you come to join VTB?

Jim Rogers: I’ve been to Russia several times. My first visit was in 1966, and people know that I have been always very skeptical about the country. But people at VTB asked me if I wanted to work for them – they said they knew that my views could change. We first met in June or July, when I was in Moscow; and then we met at the APEC summit in Vladivostok. The thing is, I do think the situation is changing for the better in Russia; otherwise, I wouldn’t be working for VTB.

Expert: People wonder whether your enthusiasm for Russia is part of the contract with VTB.

J.R.: If you think that you can buy me for a couple thousand rubles or dollars, you’re wrong. I might have a price, but it is too high. I don’t really know how much I have to be paid to say what I don’t really think is true. I heard an interview with Putin and realized that I agree with almost everything that he had to say. Nearly everything that he said was quite interesting, and it made me think. This had never happened to me before – at least, not when I listened to a politician speak.

Expert:You really did use to have an extremely negative attitude towards Russia in your speeches and interviews. Has the country changed, or were you too critical of the country?

J.R.: My attitude was fair; it’s the country that is changing. The people in government are changing. When things change, people have to alter their opinion. I might be wrong, but it seems that Russia is changing for the better. However, many remain skeptical, including people in Russia; which is good, because skepticism makes assets cheaper. When most people are wrong and you turn out to be right, you can make a lot of money.

Expert: What exactly did you like about that interview with Putin?

J.R.: He said that foreigners should be able to make adequate incomes in Russia and have their investments secured. Capital needs only two things: security and yield. The higher, the better. He admitted that investors weren’t entirely safe in Russia before, that Russia needs to ensure the rule of law. I also liked his words about Pussy Riot.

Expert: But even if, in your opinion, what he said was “correct,” at the end of the day, they are only words.

J.R.: You’ve got a point. Russia has been saying the right things for 95 years: “We love you, just get your money here, we want to help you.” And then they take your money and send you to prison. But I believe that, now, both actions and words will be positive; although this doesn’t necessarily mean that things will go smoothly.

Expert: What do you think about the situation in the United States?

J.R.: America is the largest debtor in the history of mankind; not a single country has ever run up debts of this size. This might be the beginning of the end. There are many ways for a country to go bankrupt – you can simply print too much flat money. In the Soviet Union, if I owed you a million in the 1980s, I’d easily repay you in the 1990s, and the million would cost me nothing.

The economic situation in a country can change very fast. In 1918, Great Britain was the world’s most prosperous nation, with no obvious competitors. Two generations later, it went bankrupt. The same holds true for the U.S. – it is on its way to bankruptcy. In 1987, the U.S. was still a creditor. But, 25 years later, it is the largest debtor in the world.

Expert: Should the U.S. try to reduce the debt, or is it too large?

J.R.: It’s a meaningless question; they won’t even consider it. Obama won in 2008 and promised that he would address the budget deficit. But the deficit eventually became the largest in history: more than under all of the previous presidents put together. All we can do is wait and see what happens next.

Expert:It seems the best place to do this is from Singapore, rather than the United States.

J.R.: I’m not sure about Singapore, but the U.S. is definitely not the place to be.

There is a story of a Parisian man who thought that something was happening in 1938 and decided to leave Europe to wait out the storm. He found an island in the Pacific and went there, thinking that he would be safe there. But that island was Guadalcanal, which saw one of the fiercest and longest battles of World War II. The man was right when he left Europe, but he was unlucky in going to the wrong place. Who knows, Singapore may turn out to be my Guadalcanal.

Expert:  So we are pretty much doomed then?

J.R.: If people wake up tomorrow and decide that something needs to be done, we can salvage the situation. We lived in debt for fifty years, but it’s better to lose your arm than wait for cancer to finish you off.

The Japanese had similar problems in the 1990s; they didn’t allow their companies and people to go bust, and they lost two decades.

Scandinavian countries did the opposite: they let their companies and people go bankrupt. It was terrible for three years, but then they started growing as Japan went down. This is the realistic way. Russia made this choice in the 1990s, when the ruble collapsed and everyone who deserved to go bust did so; but afterward you had a favorable economic situation. We should opt for the short-term pain.