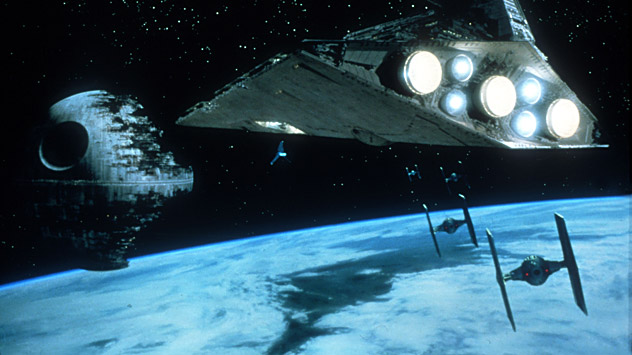 It remains to be seen wheather star wars will be come a reality. A footage from the "Star Wars" movie. Source: AFP / East News

Two new military satellites – one American, the other Russian – were recently launched into orbit. Today, different satellites are constantly being sent up into space; even so, the event is yet another indication that space is becoming more militarized.

In trying to prevent space from turning into a kind of new warzone, it is essential that international agreements to ban space armaments be developed and signed.

Back in 1977, no one would have ever believed that George Lucas’s “Star Wars” could become a reality. But today, 35 years after the film was first released, it seems as though space battles could well take place outside the realm of Hollywood fantasy. Space has become a central part of military and defense policies in many of the world’s largest countries.

The best offense is a good defense

In the future, a country at war will not attempt to occupy enemy territory directly; instead, it will concentrate on finding a country’s weak spots before issuing calculated blows. Ground troops and armored vehicles will soon become a thing of the past, and strategic aviation is also set to take a back seat in military campaigns of the future.

The understanding of “strategic armament” has shifted, from classic “nuclear defense triads” and toward non-nuclear armaments that rely on high-precision weapons systems and various means of deployment.

Wars of the future are expected to involve a great deal of orbiters to ensure a country’s security: satellite reconnaissance, warning, forecasting and targeting systems – objects which themselves will need to be defended and armed.

The United States is putting huge investments into satellite technology. In 2009, U.S. Defense Minister Robert Gates convinced Congress to designate a sum of $10.7 billion to developing this field. His successor in Barack Obama’s administration, Leon Panetta, clearly has no intention of lowering this sum.

Authoritative military analysts – for example, Gen. Vladimir Slipchenko, who recently passed away – predict that, by 2020, the world’s leading countries will have between 70,000-90,000 precision weapons. The number of satellite systems that these armaments will require can only be imagined. Without satellites, the cruise missiles and smart bombs that can be programmed to wipe out something as small as a mosquito are no more than useless lumps of metal.

Thus, it is only a matter of time before orbital systems are developed to independently hit targets in space, in the atmosphere or on the Earth itself. However, simply because the technology exists (or soon will), it does not follow that it is necessary to send military space stations into orbit. It also certainly should not mean that reconnaissance or meteorological satellites have to be armed. In reality, the problems of satellite defense could be effectively dealt with from Earth.

“Whoever owns space also owns the world,” said former Chief of Arms of the Russian Armed Forces, Lt. Gen. Anatoly Sitnov. Still, those in the military are the first to admit that Russia is lagging far behind the U.S. when it comes to space systems.

At the moment, the sky is home to around 500 American orbiters and only 100 Russian ones. According to Russian experts, the American satellite fleet is also more than four times the size of Russia’s. In addition, not all of Russia’s orbiters are in good working condition.

In June 2012, the experimental space-craft X-37B completed a successful autonomous landing, after more than 15 months of orbiting the Earth.

The Americans do not hide the fact that this sort of technology could first and foremost be applied to create new armament opportunities.

In this respect, Russia maintains a position that is very different from America’s.

According to Gen. Vladimir Popovkin, commanding officer of Russia’s Space Forces and head of Roskosmos, space systems are technically very complex and could fail easily.

“We are categorically against placing or launching any sort of armaments into space, because space is one of the few areas where there are no borders. Introducing arms into space will upset the balance in the world,” Popovkin said in May 2008.

According to military experts, strategic nuclear stability – i.e., guarantees against a sudden nuclear missile strike – rely heavily on the efficacy of early warning satellites that detect missile launches; they also depend on the constant work of reconnaissance satellites. If one of these orbiters ceased to function, the security of the state that launched it would end up in jeopardy. This, in turn, could create an atmosphere of distrust and uncertainty, which could ultimately lead to a military catastrophe.

It would seem that Harrison Ford – who played the pivotal role of Han Solo in the “Star Wars” films – was right when he stated that the main secret of the film’s success was “not about space, but about people; this is primarily a film about human relationships.”

It is up to humankind to decide whether or not space will remain a peaceful realm or become another arena for military conflict.