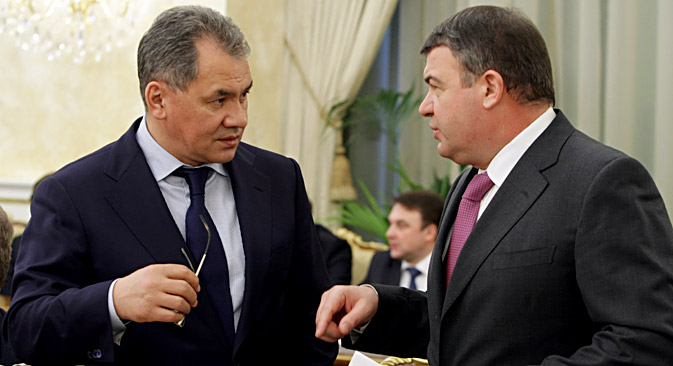 President Vladimir Putin has dismissed Defense Minister Anatoly Serdyukov and appointed for this positions Moscow Region governor Sergei Shoigu. Experts relate this dismissal to a recent scandal around a company controlled by the Defense Ministry.

President Vladimir Putin has met with Shoigu and informed him about his new position in the Russian government.

Shoigu moves from Emercom to governorship

"In view of the situation surrounding the Defense Ministry, in order to create objective conditions for investigating all issues, I have made the decision to relieve Defense Minister Serdyukov of his duties," Putin said. "However, much has been done over the past few years to further develop the armed forces and to resolve servicemen's social problems, including the problem of housing," he said.

"The post of defense minister must be filled by a person who will be able to augment the positive results achieved in the armed forces' dynamic development, and to guarantee the fulfillment of the state defense order and of the grandiose plans to modernize the armed forces," he said.

Investigators have probed operations of the Oboronservice initiated five criminal cases at once. Authorities are focusing on the company’s military real-estate deals, where they have discovered signs of embezzlement on a huge scale. Suspects include several Defense Ministry employees, some of whom are close to the Minister of Defense, Anatoly Serdyukov.

Founded in 2008, the Oboronservice holding company consists of 275 firms engaged in outsourcing services provided to the Armed Forces. Oboronservice companies are involved in a wide range of operations: upgrading weapons, making military uniforms, publishing, and so on. Among other things, Oboronservice carries on its balance sheet most of the Defense Ministry’s property intended for sale. The holding’s assets are estimated at 194.5 billion rubles.

“Defense Ministry officials were choosing the most liquid and prestigious properties owned by Oboronservice," he siad. "After investing tremendous public funds in this real estate, the properties were sold at substantially below-market prices to commercial entities affiliated with Oboronservice,” said Markin. He added that preliminary findings suggest the fraud, which involves only eight properties, amounts to more than 3 billion rubles ($95.2 million)."

On Nov. 1, investigators raided the offices of managers of several Oboronservice companies and affiliated commercial entities. They also searched the apartment of Evgenia Vasilyeva, 35, who previously headed the Defense Ministry’s Property Department. Vasilyeva is suspected of having been the mastermind behind all the schemes involving the stripping and sale of military assets. Investigators seized more than 3 million rubles, antiques, several dozen paintings, and a large amount of jewelry from her apartment.

Remarkably, none other than Defense Minister Anatoly Serdyukov himself (who happens to be Vasilyeva’s neighbor) witnessed this search. Intrigued by what was going on, the minister went over to the apartment of his former subordinate, only to find investigators at work there. Serdyukov attended no less than two searches that day, before unexpectedly showing up in the late afternoon at Vladimir Putin’s residence in Novo-Ogarevo to discuss the situation with the president.

Anatoly Serdyukov is Russia’s second civilian Minister of Defense. The launch of a radical reform of the Russian Army has been the hallmark of Serdyukov’s time in office. Numerous opponents of the reform accuse him both of adopting a purely managerial approach to matters of defense and of commercialization of the Armed Forces. His supporters point out that Serdyukov is the first Defense Minister that has launched a large-scale reform of the army, which had lost its combat capability: he reportedly spares no effort for its re-armament, re-equipment, and rebuilding up to world standards.

Earlier comments on this scandal indicaded that political motives are behind the accusations of fraud involving military real estate. Experted argued that these criminal charges could affect the Serdyukov's positions and they seem to have done it.

Serdyukov’s personal interest in the probe came as no surprise to political analysts following the scandal, as many experts believe the investigation is an attack on the minister himself. According to RBC Daily, one of the reasons behind the conflict might be rooted in purchases of foreign-made weapons and equipment for the Armed Forces – an area coordinated by Serdyukov and Dmitry Rogozin, deputy prime minister in charge of the defense industry.

Political analyst Stanislav Belkovsky disagrees. “According to my sources, it’s the president’s Chief of Staff Sergei Ivanov and former Finance Minister Alexei Kudrin who are displeased with Serdyukov. Serdyukov has effectively isolated the former from everything that’s going on in the Defense Ministry, and Kudrin has always opposed increasing military spending,” Belkovsky told RBC Daily.

Pavel Salin, a political analyst at the Center for Political Assessments, also sees political motives behind the developments. “At the end of the day, there are two goals there,” he said in a live Kommersant FM broadcast. “First – to strike a blow at Serdyukov’s idea of outsourcing the servicing of the army to the maximum. Second – they’re digging up dirt on the minister.” According to Salin, a “defense lobby” might be behind the attack.

The article is based on the materials from Interfax, Kommersant FM and RBC daily.