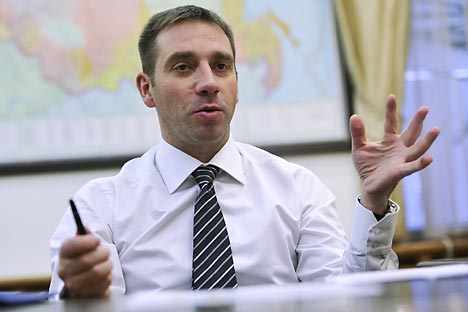 How can Russia bring capital back into the country? What can be offered to investors, other than an expanding consumer demand? What competitive advantages can Russia still offer?  The deputy minister for economic development gave his answers to these questions to Kommersant 'Dengi' correspondent Nadezhda Petrova.

Kommersant 'Dengi': The commercial environment is one of the factors that makes a country attractive to investors. Currently, Russia has dropped to 112th place in the Doing Business ratings....

Sergei Belyakov: So can we make it to 20th place?  Honestly, it’s more important to me that the results of our work in simplifying business procedures be felt by the end-user – I mean, by businesses. If everything we’ve set up can be brought to life – which means concrete results for business laid out within agreed terms, the quantity of submitted documents, and the costs which go along with it – then, of course, our place in the ratings will improve.

Canadian company may be first to produce Western aircraft in Russia

The content of the specific indicators is the basis for drawing up a road map, wherein everything is laid out by year, showing when and what to do. It’s a decision-making document, actually. Four such road maps have already been adopted, and another set of four are in preparation. There will be 22 in all. They are the mechanism to improve our performance. The rating we achieve in Doing Business, it’s only the result.

Results demonstrate that the mechanisms for achieving these aims are correctly selected. However, there’s a further conclusion to be drawn from the most recent World Bank report. We need to become substantially more active and result-driven in implementing the measures we’ve devised. Capital flees to the location where the profitability is best and where costs and risk are lower. We’re in a good position for profitability – but we have to radically reduce the risks and costs. That’s what we’re doing.

KD: But is that going to be enough? I would say the situation with investment is going the other direction, and it’s decreasing.

S.B.: Currently, the level of investment is dropping off in the U.S., and also in the BRIC nations. In a crisis people prefer to hoard and not invest, because investment against the background of crisis involves risk. So it’s not only Russia.

Last year, direct foreign investment totaled $52.3 billion. For the first three quarters of this year it adds up to $38 billion. I hope that we’ll hit a total of $52 billion by the end of the year, but this isn’t enough. The minimum investment we need to achieve is around $75 billion per year; this is what we need to achieve for the modernization of our economy. We can’t do that with federal funds alone.

KD: So we’re talking about foreign investment in particular?

S.B.: When I talk about $75 billion a year – then yes. Speaking of the business climate generally, we don’t split things up between Russians and foreigners. The conditions have to be right for business, for capital. Capital knows no nationality.

KD: But the problems do not only concern foreign investment.

S.B.: We focus on foreign investment for two reasons. The first – there is always technology and expertise. It’s an essential tool to make the so-called technological leap. The second – foreign international corporations and investment funds can choose where to invest. They seek the top returns for the minimum risk, and the economy where their funds are placed gets an additional boost for development. If the investment decision of such organizations doesn’t go in Russia’s favor, we don’t just miss out on a number of billions of dollars, but we also deepen our technological inability. We’re going to address the problem of capital flight more as the problem of our citizens fleeing their own country.

Another difficulty is the hobbled infrastructure. Failings in infrastructure limit the amount of investment. It has to be fixed. But investment in central capital is dropping off. They are long-term projects with lower rates of return. Here, the role of federal investment is always vital. Currently, we don’t have the ability to invest as much into infrastructure as we did previously.

A further problem – the system now motivates businesses to solve their own problems informally. In fact, it’s predicated on the need businesses have to overstep any problems in their path. This is wrong. The state should only step in when risks are being concealed from the end-users of services, or when a business is hiding some kind of illegality in what it does. The number of business types whose activities require officially-issued permits should be as small as possible. It’s when we sufficiently cut the red tape that businesses can make money, and the state simply aids them to do so – that’s when capital will stop fleeing, only to come back through offshore funds.

Today, business is a headache. For some reason, our bureaucrats somehow only see businessmen as offenders.

KD: What about the competitive advantage offered by human capital and the quality of education?

S.B.: There are the ratings of the owners of the largest foreign companies who have set-ups in Russia. Their view is that the level of human capital remains a significant advantage for Russia. On the question of how long that advantage will continue to work for us and how education standards are currently, I’m not inclined to idealize matters.

Another downside is the mobility of the workforce. I’ll give you an example. Kaluga has a lot of investors, and they’re all very happy with the quality of staff they find on the market there. But now, in fact, there’s no one left to work at these companies, because the entire labor resource they were hoping to attract has already been snatched up.

We have low unemployment, and that’s definitely a plus. But it’s a minus when it comes to the needs of a growing economy. And our population isn’t really mobile. Stimulating people to move from one region to another, because new companies are opening there and job openings are coming up, is almost impossible. As an example, there’s the story of how one of the Rusal factories in Leningrad Region was threatened with closure. As far as I know, the company management at Rusal offered the staff the chance to move to other regions, where the company was doing better and where new job openings were coming up.

KD: For example, from Leningrad Region to Siberia?

S.B.: They all stayed where they were already living. Our behavioral patterns don’t stretch for the idea of such a quick relocation. It goes back to the Soviet economic methodology, when you were firmly attached to the place where you lived.

I guess it’s tough to move from Moscow or St. Petersburg, or from Moscow Region or St. Petersburg Region, to Siberia. In principle, we need to work on setting things up so that this kind of relocation isn’t a shock – so that it’s not only in the two capital cities that people can expect a decent standard of living, cultural infrastructure, medical services and education facilities. And that’s what the whole of this story of investment is about – so that a proper quality of life can prevail throughout the country.

In the United States, say I was to move from Washington to Atlanta – I wouldn’t notice a decline in my living standard. Say I was to move from New York to Atlanta, then I’d notice that New York is a business and cultural center, whereas Atlanta is basically a small city. But the quality of life would be comparable, even though you can’t go to Broadway in Atlanta.