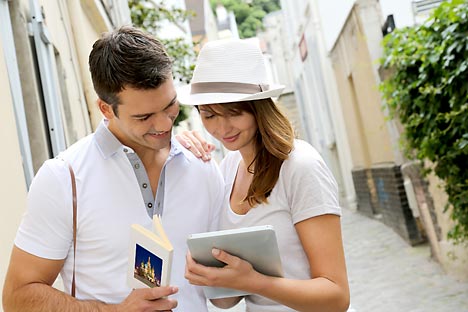 Once the mobile Russian Travel Guide application is installed, users are offered a few minutes of live broadcasting for free, after which the viewing window is blocked until payment is received. Source: Shutterstock / Legion-Media

Good news for those who love to travel, in reality or virtually: the Russian Travel Guide TV (RTG TV) channel has launched an iOS application with which users can watch its TV shows on mobile devices

The RTG TV mobile app is a logical step: the travel channel actually targets an audience that should, by definition, be constantly moving around the world. Now its viewers can stay on top of the latest news and the schedule for their favorite channel, all on the go.

So far, the application is only available to Apple fans. While paying tribute to this highly popular brand is certainly in line with the current trend, the downside is that the TV channel has overlooked a large – and constantly increasing – number of Android device users.

The application is very light (1.3 MB) and takes almost no time to install. The only requirement is that the gadget’s operating system must be iOS 4.3 or higher. The app features three sections: news, live broadcasting, and “about RTG TV.” The news feed includes text reports with both photos and videos. The live section features the channel’s schedule for the upcoming week, with an advertisement and a short trailer for each program. The trailers are very short and could be more aptly called “video images.”

The application is free to download, but users have to pay if they want to watch programs live. Once the mobile Russian Travel Guide application is installed, users are offered a few minutes of live broadcasting for free, after which the viewing window is blocked until payment is received. Several payment packages are available: one month, three months, six months or a whole year. The longer the subscription period, the cheaper the service is in relative terms. A month’s subscription costs $1.99, while a year’s subscription is offered at the even more agreeable sum of $12.99.

The mobile version’s biggest upside is that it broadcasts programs and films in Russian and English without any advertising. On the other hand, the app requires a Wi-Fi connection: watching the channel while out in the wild is impossible, even if the user’s mobile connection is very good.

When the first version of the application was launched, some App Store users complained of subscription troubles, and the live feature was not working properly. An upgrade has since addressed those issues, and there are absolutely no negative reviews of the app on App Store now – only the most laudatory feedback, which can also be cause for alarm.

Bridge Digital, the developer of the application, is about to issue the latest set of upgrades, but has not yet disclosed what exactly will be upgraded. It is known, however, that the application for iPhones and iPads will be expanded into a Russian Travel Guide TV movie theatre, which will allow users to watch films created by RTG TV for an extra fee.

The Russian Travel Guide is an educational channel featuring programming on the cultural originality and nature of Russia. It could also be dubbed the “Russian Discovery Channel.” RTG TV produces its own content for popular science films and shows. The Russian Travel Guide attempts to fill in the gaps of knowledge about Russia, given the country’s diversity and beauty.

RTG TV programming includes shows and films about Russian cities, unique natural sites, Russia’s cultural diversity and scientific achievements. The channel aims to boost the country’s popularity as a tourist destination for foreigners, as well as to remind Russians that they do not need to leave their country in search of beautiful nature. A trip to the Altai, or Siberia, or Kamchatka would serve the purpose just as well.

The channel has received domestic and international recognition. This year, the film “A Walk around St. Petersburg: City of White Nights,” produced by Russian Travel Guide TV, was awarded the main prize at the Cannes Corporate Media & TV Awards. Over 500 cable TV providers across Europe, Russia and the CIS have added the Russian Travel Guide to their subscription packages. The channel broadcasts 24/7 in Russian, English and Turkish.