Why Russia and Australia can forge a solid partnership 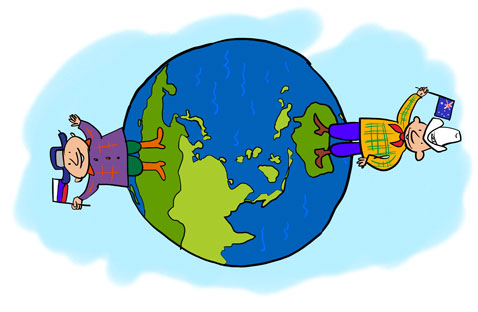 The first Russians to arrive in Australia were Leonty Gagemeister and the crew of the sloop Neva, which sailed into Port Jackson (now Sydney) in 1807 to stock up on supplies en route to Russia’s colonies in North America. Russia was then an ally of the UK against Napoleon's troops, and the governor of NSW, William Bligh, held a ball in honour of the Russian sailors.

After the Crimean War (1853-1856) and the renewal of Russian-British trade relations, the first Russian consulate was established in Australia and in the early 20th century, Russia's diplomatic network extended to Sydney, Brisbane, Darwin, Hobart, Newcastle and Perth. However, following the Russian Revolution of 1917, official relations between the two countries endured a long hiatus.

Full diplomatic relations between the Soviet Union and Australia were finally established at the height World War II. On October 10, 1942, People's Commissar for Foreign Affairs of the USSR Vyacheslav Molotov and Australia's External Affairs Minister, Herbert Evatt, agreed to exchange diplomatic representatives. Nevertheless, until the early 1990s relations were uneasy. After the fall of the Soviet Union, the mutual desire to grow political, economic and trade ties prompted Moscow and Canberra to reconsider their approach to each other.

In recent years, Russian-Australian relations have shown dynamic development. Political contacts have expanded, including at the highest levels. The countries' foreign ministries are engaged in a strategic dialogue, and hold regular ministerial consultations on key regional and international issues. Our countries see eye to eye on a number of key global issues, including strategic stability and security, the fight against international terrorism, trade liberalisation and non-proliferation of weapons of mass destruction.

Russia looks forward to fruitful cooperation with Australia under the UN Security Council, and collaboration in key regional spheres — APEC, the ASEAN Regional Forum on security, East Asia Summits and the G20 — is also continuing apace.

Contacts between the countries' business communities have also seen growth. Of particular interest are the fields of mining, agriculture, energy, including nuclear energy, space, IT, telecommunications and biomedicine. The opportunities are manifold.

Other highly promising partnership vectors include humanitarian relations, education and sport. Student exchanges and direct contacts between universities and research centres are in full swing. Also, this has been a landmark year in terms of our cultural relationship. Many people in Australia are well acquainted with Russia’s long history of cultural accomplishments, so it was pleasing to see the reception given the Eifman Ballet Theatre, the Imperial Ballet and the Russian National Ballet this year. Huge interest has also been shown in the exhibition Alexander the Great, to be presented by the State Hermitage. Scheduled for 2013 are tours by the Bolshoi Theatre and the Hermitage's new exhibition, Catherine the Great.

The binding role played by my compatriots is important. As an integral part of Australia's multicultural society, the Russian community contributes enormously to our bilateral ties, enabling Australians to better understand Russia.

Overall, the past 70 years of diplomatic relations have laid a solid foundation for the development of true friendship, and have clearly outlined that only by working together can we improve bilateral cooperation, solve the complex issues facing the world economy, and respond to the serious political challenges ahead.

Vladimir Morozov is Ambassador of the Russian Federation to Australia.