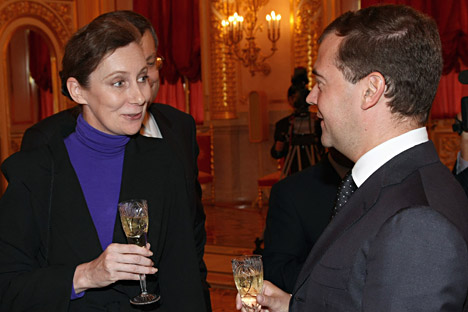 Bilateral relations between Russia and Australia are hampered by a lack of information about possibilities on both sides.

Vadim Saltykovsky, Deputy Chairman of the Committee for Economic Cooperation with Asia and Oceania of the Chamber of Commerce and Industry of Russia, spoke with Ekaterina Zabrovskaya of RBTH about the ways to fill the information gap between Russia and Australia, as well as prospects for simpler visa formalities between the two countries, resumption of kangaroo meat supplies to Russia and other aspects of bilateral relations.

Russia Beyond the Headlines: How would you describe the current status of bilateral trade relations between Russia and Australia? What are the focus areas of these relations?

Vadim Saltykovsky: Relations between Russia and Australia are developing quite successfully. Last year, our trade turnover exceeded $1 billion and, in 2012, we have already recorded a 30 percent increase in supplies over last year. Naturally, exports and imports are not balanced, but this is also true for many other trade partners.

Russia mostly exports chemicals to Australia, whereas its main imports are meat, animal products and chemicals.

RBTH: Are there any obstacles to the development of trade relations?

V.S.: First of all, we would like Australian companies to become more actively engaged in our investment projects, including in modernization projects in the Far East and Siberia.

Another problem I feel I should mention is the information vacuum between Russia and Australia. Australian companies are unaware of the potential opportunities for investment in the Russian economy.

One more problem is visa procedures. The thing is that, for a variety of reasons, the Australian government is not always willing to issue visas to Russian citizens, especially state officials and employees of government bodies. The Russian side has to take appropriate steps.

RBTH: Are there any plans to make an agreement with Australia to liberalize visa procedures, like the deal Russia has signed with the U.S.?

V.S.: Foreign Minister Sergei Lavrov has provided instructions that visa procedures should be liberalized with all of the Asia-Pacific Region countries. We have made impressive progress, but there are still problems with Australia that need to be addressed.

Russian Ambassador to Australia Vladimir Morozov is contributing actively to this process. I believe we will be able to speak about liberalization in the long run but this process needs time.

RBTH: Are there any big Australian companies working in Russia? Is Australian business becoming more interested in Russia?

V.S.: Of the big Australian companies currently operating in Russia I should mention Tiger, which is engaged in coal mining in Chukotka, and the pharmaceutical company Solagran, which was founded by a Russian emigrant. It works in the Tomsk Region, producing medications from Altai herbs. These are the two biggest Australian projects in Russia. We would like to have more partners of this kind.

RBTH: There have been reports that the Australian Quarantine and Inspection Service plans this October to hold another round of talks over possible resumption of kangaroo meat supplies to Russia. Could you elaborate? What are the prospects for resuming supplies to Russia in the near future?

V.S.: We did, indeed, halt kangaroo meat deliveries. It wasn’t a political move. There were some ingredients in the meat that might have caused problems for consumers.

During the G20 summit, Australian Prime Minister Julia Gillard discussed this issue with then-President Dmitry Medvedev, who said that we didn’t mind opening up this market but that the problem should be resolved.

Business comes from below to reap benefits from APEC

I believe we might resume imports if Australia complies with formal requirements. Unfortunately, I am not aware of the details.

RBTH: There have been media reports that the Australians are interested in the Kaliningrad Region’s gambling area. Moreover, Australian businessmen intend to take part in designing facilities in Kaliningrad for the FIFA World Cup 2018 that will be held in Russia. What other regions attract the Australians?

Australia has also shown an interest in the Far East. They are also eyeing the Kemerovo Region, the Russian mining region.

Australian companies are engaged in joint projects in the Southern Urals, at the Kopeysk Engineering Plant, including development of a high-power tunneling machine. We provide our solutions and the Australians are responsible for the electronics. But these are just the first steps.

RBTH: What needs to be done to enhance the appeal of Russian projects for Australian business?

V.S.: First, we need to improve the business environment in the country. Second, we should fill the information vacuum between Russia and Australia. We are unaware of what happens there and they don’t know what is going on here.

We should also promote town twinning. For example, we signed an agreement between Perth and St. Petersburg five years ago but hardly anything has been achieved since then.

Nevertheless, the Australian Embassy in Russia reports an increasing number of Australian tourists visiting Russia: the number has doubled over the last two or three years. Last year, about 60,000 Australians received Russian visas, which is a good result, given the distance between the countries. It seems to me that this area for cooperation still has a potential that needs exploiting.

V.S.: I’d start with the Baltika brewery, which has bought into several Australian beer companies and sells its beer in Australia – it is the best-known Russian brand in Australia.

Second, Kaspersky Lab has an office in Sydney and enjoys a strong demand for its products in Australia. When it comes to Norilsk Nickel and RUSAL, as I understand it, they have bought several deposits in Australia but have not started developing them yet.

To be honest, I don’t think Russian business will take an interest in Australia. That country has a well-developed and fiercely competitive market, so there will be few Russian companies working there. That’s not a problem, though, as long as these are four or five flagship companies that can put up a good show.

V.S.: There is no talk about Australia joining the free trade area of the Customs Union. We are in talks with New Zealand but there is a problem there – we want to have something in return when we sign the deal. How will New Zealand benefit? It will enjoy a combined market of three countries for selling its meat and dairy products, hence different prices, additional sales volumes and a bigger market, as well as different customs duties.

Talks are under way; the New Zealand Prime Minister is expected to visit Moscow in February or early March. Some progress will likely be made before the end of the year.

{***The future of Russian-Australian relations***}

RBTH: In your opinion, what is the future of the bilateral relations between Russia and Australia?

V.S.: We need to create more opportunities for contacts in various areas. For example, the Australian side has asked us to help organize a tour of the Mariinsky Theatre to Australia after a 20-year gap. I believe these areas – culture, cooperation between universities and twin-city relations – have excellent prospects.

In the trade sector, we need to increase supply volumes. We might also think about mutual payments in national currencies – we seem to have sufficient trade volumes.

The third thing is establishing joint investment alliances in third countries. This applies primarily to the mining industry, where, in some sectors, we have more advanced technologies than Australia.

We might also negotiate exchanges of specialists. Australia is short of specialists in the mining industry. We know that many Australian mining companies would like to invite Russian specialists – engineers and operators – to work for 4-6 weeks on a rotational basis. We would also like to have our specialists work there – it would be a good chance to develop personal relations.