Business comes from below to reap benefits from APEC 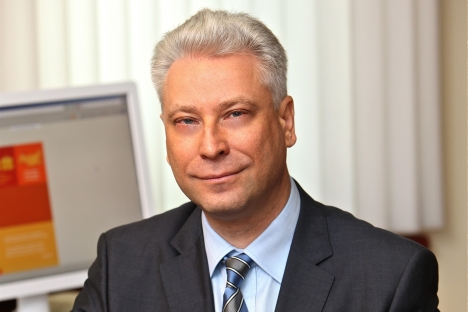 Sergei Kryulov: "If the government solves the big questions and remains consistent in its commitment to the region, our clients move in and take advantage of the economic opportunities that develop." Source: Press Photo

Vladivostok's APEC CEO summit will have a lasting legacy on the development of the Far East, says Sergei Kryukov, Head of the Russian Bank for Small and Medium Enterprises Support.

Russia Beyond The Headlines: What role can the APEC CEO summit play in improving the attractiveness of the Far East for international investors?

S. K.: As they say,” it’s better to see something once than hear about it a dozen times.” Colossal sums have been invested into developing the infrastructure of the region: locals are happy that this bridge has been built, normal draining and water filtration systems have been constructed and upgraded and transportation has been improved. All of these are important factors for businesses because they provide a comfortable environment.

It’s important that by investing in Vladivostok the government has signaled to potential investors that Vladivostok can be an investment hub alongside more famous ones like Moscow and St. Petersburg. The tourism potential of the region is vast; now the world will know about it. The raft of agreements singed here with a Chinese investment fund and other foreign players suggest the Summit was a success in that sense.

RBTH: Supposedly, one of the reasons Vladivostok doesn’t have a McDonalds is because the population isn’t high enough to justify that investment. This applies to other sectors as well. Is there truth to this point of view?

S. K.: Of course there is. We can see the region still hasn’t been able to reverse its downward demographic trends. That’s why the government is focusing so heavily here. It’s impossible to reverse this decades-long trend in the few years immediately before the summit. I think the trend will be reversed in the next five-to-ten years.

Looking at our agenda – small- and medium-sized businesses (SMEs) – the focus is almost entirely on innovation and modernization, which may seem strange at first because most businesses here revolve around trade. There had been no demand for other kinds of business.

So why do we focus on innovation? The trading business doesn’t require the government’s support – it’s already here. We help the segment that faces the most difficult conditions. It’s also the sector that creates new, modern jobs. It’s where our educated youth can apply its high skills and flourish. The creation of these jobs will entice young people to stay here.

And it’s already happening – who thought it was possible to build automobiles in the Far East only a few years ago? The auto cluster that already exists here offers huge potential for SMEs, which provide components for the cars. We can do here what we’ve already done in forming the auto cluster in Kaluga (where there are major plants owned by Volkswagen, Volvo and other international giants – RBTH).

RBTH: But will Russia’s Far East realistically ever be able to manufacture goods cheaper and better than neighboring countries like China, Japan and Korea?

S. K.: That’s a goal for our government – they have to calculate what sectors have potential here and why it’s more expensive to manufacture in Russia. Why are roads several times cheaper to build in China? If they can eliminate these factors – and I’m sure this is possible given the high level of education in our country and the resources of the region – production will be competitive here.

But we look at it from the point of view of business. Businesses are very flexible – they find new opportunities to make money. By supporting them, we find this path from below. If the government solves the big questions and remains consistent in its commitment to the region, our clients move in and take advantage of the economic opportunities that develop.

A good example is the Far Eastern Federal University, which is creating many opportunities for SMEs focused on innovation and tourism to develop alongside and commercialize the ideas coming out of it. But this is a long-term process that will take five to ten years to realize, not one or two. Therefore I’m convinced long-term development of manufacturing and other sectors is realistic.

RBTH: So all the infrastructure the government built here is a strong signal that it will remain committed in the long term?

S. K.: Yes. Moreover, there are jobs already springing out of what’s been built. The other day we were riding with a local cab driver across the Golden Horn Bridge in Vladivostok. His part of town, which used to be completely run down, is experiencing a boom now that it’s only minutes from downtown instead of hours. Real estate prices have gone up and new jobs are springing up. They’ve been waiting for this bridge for over 100 years; it’s definitely the right signal.

RBTH: What kind of agreements has your bank reached at this year’s APEC CEO Summit?

S. K.: In developing SMEs in Russia, it’s important for us to learn about the best international practices. While we already have a good dialogue with our analogues in Western countries, in the East this exchange of ideas is only beginning. We’re very interested in the experiences of China and Southeast Asia (especially Malaysia) because, just like us, they are developing economies, but the share of SMEs in their economies is much higher. We’d like to correct that because it’s the foundation of a middle class.

We send our experts to those countries and they send theirs over here to discuss topics like government-business relations, types of crediting, popularizing business practices, etc. We’ve signed a number of agreements here to facilitate this exchange.

RBTH: What main problems do you face in developing SMEs in Russia?

Unpredictability is a huge problem – the state says one thing and does another. Property rights are another biggie – entrepreneurs complain, and they are completely justified in doing this. Most of the other problems mentioned like bureaucracy and money flowing into offshore accounts stem from these basic ones.

Among long-term projects our clients are engaged in, transparency is a huge issue. We have to have a very thorough understanding of their financial flows. Not all companies want to provide this; the more we demand, the smaller our client base becomes.