A “magic lamp” for the thermonuclear “genie” 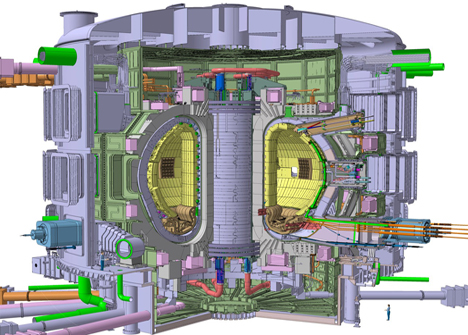 A scheme of the thermonuclear experimental reactor. Source: Press picture.

The terrible and awe-inspiring power of thermonuclear reactions in mankind’s Cold War past may translate into a much-needed supply of inexhaustible energy for the future. Much work still needs to be done, however, as the “genie” of thermonuclear energy will require a strong and reliable “magic lamp” to contain and control its explosive power. Scientists from around the world continue to work together on this very problem.

On the first day of November, 60 years ago, the U.S. detonated the world’s first hydrogen bomb at Eniwetok Atoll on the Marshall Islands. Two days earlier and nine years later, the Soviet Union literally shook the planet by testing a thermonuclear device with an unheard of 50 million tons of conventional explosives.

Missile- and bomb-mounted thermonuclear warheads have since become a mainstay of the world’s leading armed forces. However, the thermonuclear process will most likely become not only a tremendously destructive weapon, but also a kind genie that will save our civilization.

The Earth’s natural energy sources are depleting rapidly. “The reserves of oil, gas and uranium, even at current consumption levels, will last for approximately 100 years. We must therefore start looking for alternative energy sources right now,” said Erik Galimov, a member of the Russian Academy of Sciences Space Council.

Humanity needs a nuclear source of energy, albeit a safe and reliable one. Controlled thermonuclear reactions, where two light atomic nuclei – such as hydrogen or its isotopes, deuterium and tritium – fuse together to release nuclear energy, is a virtually inexhaustible source of energy.

While it took a relatively short time to develop and test the hydrogen (thermonuclear) bomb, figuring out a solution for controlling thermonuclear fusion has only become possible recently – even though the best Soviet and American scientists have been working on this problem since the 1920s.

The global community realized in the early 1970s that building a thermonuclear reactor required broad-based international cooperation. In September 1985, the Soviet Union invited a number of countries to jointly develop an International Thermonuclear Experimental Reactor (ITER). Scientists from Russia, the United States, Japan and Europe had completed a conceptual design for the reactor by the early 1990s. An international task force of physicists and engineers, including experts from Canada and China, started engineering work on the project in July 1992, under the auspices of the International Atomic Energy Agency (IAEA).

The key program goal of the ITER project is to demonstrate the scientific and technical possibility of producing energy from the fusion of hydrogen isotopes deuterium and tritium. ITER is designed to produce approximately 500 megawatts (MW) of fusion power at a plasma temperature of 180 million degrees Fahrenheit.

In November 2006, all ITER project participants – the EU, Russia, Japan, the United States, China, South Korea and India – signed the Agreement on the Establishment of the ITER International Fusion Energy Organization for the Joint Implementation of the ITER Project. Construction of the reactor started in 2007.

Russia’s participation in the project amounts to designing, manufacturing and supplying key technological equipment to the reactor’s site in the French town of Cadarache, as well as a cash contribution equal to around 10 percent of the total cost of the reactor. The United States, China, India, South Korea and Japan all make the same contribution.

Construction of the reactor was initially estimated at $94.5 billion, with a completion date set for 2016. The budget has since doubled and the deadline for the start of experiments rolled back to 2020.

Russian specialists are playing a leading role in the process, since they are first people in history to have carried out an actual quasi-stationary thermonuclear plant project with an estimated thermal capacity of around 500 million MW.

The St. Petersburg-based Yefremov Scientific Research Institute of Electrophysical Apparatus serves as a base for unique ITER equipment testing. The project is expected to yield results by the end of November, the Russian ITER agency Project Center ITER announced.

According to an earlier statement made by Yevgeny Velikhov, a member of the Russian Academy of Sciences and president of the Kurchatov Scientific Research Center, Russia is successfully fulfilling its obligations to the ITER project; its index of contribution to the project in terms of timing, scope and quality of work is higher than of any other ITER participant.

Speaking to journalists at the former top-secret Arzamas-16 nuclear research facility near Nizhny Novgorod at the end of July 2009, former President Dmitry Medvedev laid out the scope of work to be done on controlled thermonuclear fusion.

Yevgeny Velikhov, secretary of Russia’s Civic Chamber, said in 2007 that the first thermonuclear power plant was unlikely to appear any time in the next 25 years. Russia is expected to start generating 1 gigawatt (GW) of commercial thermonuclear energy by 2050; by the end of the century, generation of 100 GW is estimated, amounting to more than 40 percent of Russia’s existing power capacity.

For now, however, what the untamed omnipotent thermonuclear genie needs is a sturdy “lamp.”