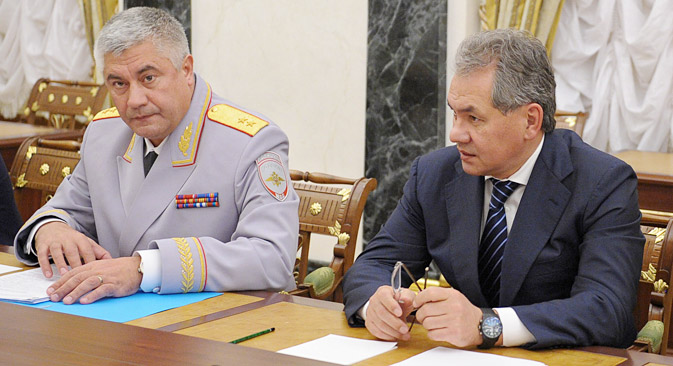 The new minister needs to continue the policies of his predecessor, while simultaneously correcting his mistakes.

A reshuffle at the top of the armed forces dominated the headlines in Russia last week. After a scandal involving Oboronservis – the joint-stock company affiliated with the Ministry of Defense – the president fired Defense Minister Anatoly Serdyukov and replaced him with the former minister of emergency situations and civil defense, Sergei Shoigu.

Will Shoigu have military reforms in his sights?

According to some reports, deputy ministers Tatyana Shevtsova and Dmitry Chushkin (in charge of defense finance and construction and responsible for its IT policy, respectively) are also about to resign.

There is nothing unusual about a new leader bringing in a new team. Any boss would want to rely on like-minded professionals that can be trusted completely. It is unlikely that military experts have any doubts about the newly appointed generals fully meeting those requirements. However, there is one hitch.

Neither the president nor the prime minister, nor the new minister of defense, have given any authoritative assessment of the army and navy reforms that Anatoly Serdyukov and Nikolai Makarov administered over the past four years; nor have they said what was good and useful for the state’s military organization, what was bad and unacceptable, and what needs to be changed or adjusted.

The only thing heard was a general assessment offered by President Vladimir Putin in his article published in March 2012. He stated that he was quite satisfied with the progress of reform, although it was not without mistakes and needed certain adjustments.

Prime Minister Dmitry Medvedev, in turn, said during a recent visit to Vietnam that, “Serdyukov was an effective minister of defense, which was reflected in the armed forces transformations he was conducting.” And that was it. Which brings up this question: what transformations must Sergei Shoigu and his newly appointed team continue and strengthen, what exactly do they have to adjust, and what should they abandon?

Anatoly Serdyukov joined the Ministry of Defense in February 2007. On the one hand, it was announced that reforms at that time had been completed and that the building of a new army and navy would begin. On the other hand, as shown in the August 2008 war when Georgian troops attacked Russian peacekeepers, practically nothing had been done to achieve this. Huge gaps were apparent everywhere – in equipping the armed forces and modernizing weapons, and in establishing combat support systems, including reconnaissance, communications, navigation, radio electronic warfare and the use of drones. The same applied to the battlefield management system.

The contract recruitment system was falling apart, and the number of draft dodgers exceeded 200,000. Salaries of platoon, company and battalion commanders were comparable to what janitors in the Moscow underground were making…

Together with senior officers of the general staff, among whom he had found allies, Serdyukov got down to cleaning out the stables. A new three-tier troop management system (district–army–brigade) was instituted, while heavy and unwieldy divisions that had not proven their worth in the Chechen or August South Ossetia wars were reorganized into highly combat-ready brigades.

Six military districts and four fleets were replaced with four geographically named districts – West, South, Center, and East. Except for the strategic missile forces and the aerospace defense forces, all troops located in their respective territories would now report to a single commander. All military exercises now included not only the ground forces, but also the air force, navy, air defense and airborne troops (and marines, if sea deployment was involved).

The exercises were ongoing; barely a week went by without some kind of military exercise taking place. Russian ships sailed around the world, and Russian airmen began flying over the Atlantic, Arctic and Pacific oceans. A new branch of the armed forces appeared – the aerospace defense forces. Drones started to be introduced, albeit timidly.

Conscripts were no longer used to guard warehouses or clean yards. Afternoon rest and daily physical training hours were introduced, and soldiers’ mess halls were outsourced. The housing problem began to be resolved. Currently, only 14,500 officers have no roof over their heads, as opposed to 54,500 at the beginning of the year.

But the blunders of Serdyukov’s team should not be forgotten either: the mess with military education where some institutions were shut down and others relocated to towns where leading professors and specialists were reluctant to move; the inexplicable transfer of the navy chief of staff and commander-in-chief to St. Petersburg; the cutting of 250,000 full-time officer positions before reinstating 70,000 of them; the elimination of “superfluous” clinics and hospitals, as well as warrant officer and midshipman positions; the appointment of young and ambitious, but professionally underprepared women to senior positions at Ministry of Defense departments dealing with housing, property, finance, education and other management areas.

Former rescuer Sergei Shoigu and his team are faced with the task of continuing whatever positives Serdyukov has accomplished and correcting any mistakes he has made. When instructing Gerasimov upon his appointment as chief of the general staff, the president singled out the major task of rearming the army and navy; but he did not stop there. “There are other tasks too, those involving improvements of both the structure and management of the armed forces.”

This is clearly the most urgent direction of military reform, but it is no secret that relations between the Ministry of Defense and the defense industry have been rocky. Disputes over the prices of missiles, tanks and ships aside, it is essential that the products supplied by the defense industry be of a high quality, which has not always been the case. The defense industry is also in need of reform. Primarily, the industry needs to modernize its obsolete production capacity – an area that will receive 3 trillion rubles ($94.5 billion) in federal funding through 2020.

We are sure to learn before long whether Shoigu and his team are up to these tasks.