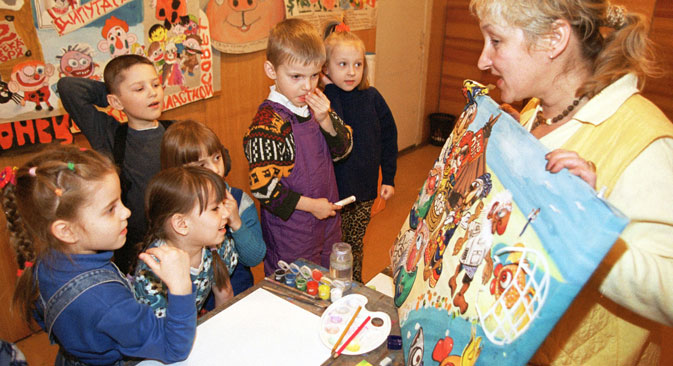 Yelena has been working at Poisk for nearly 15 years. Source: ITAR-TASS.

Everyone in Novosibirsk knows about the Poisk Children’s Film Studio, but what exactly is it that they know? They know that children as young as 18 months to two years old make cartoon films by hand there, revealing a world that grown-ups have long forgotten.

The Poisk studio, whose name means “search” in English, has occupied a wooden shack for many a happy year – it cannot even be found on a street map of the city. In the tiny office of Yelena Tikhonova, “the Good Fairy of animation,” a golden cape hangs on a wall that the teachers have painted all the colors of the rainbow.

The only way more than two people can fit into the office at the same time is by standing. Elena is trying to put the award they won in the latest competition on the shelves, where it barely fits alongside all the other awards and commendations. In fact, they say Poisk has won so many commendations that they could paper the walls with them. But the studio’s staff is not only recognized by its commendations, but by the respect of the accredited masters of Russian animation, such as Norstein, Ryazanov, Petrov, chief editor of Art in Schools, Melik-Pashaev and many more.

Yelena has been working at Poisk for nearly 15 years. She draws, writes, studies theory, conducts seminars for teachers, models as a fairy and, sometimes, as the Wicked Witch. She is an architect by profession, but an animator by calling, and she does not regret making the switch in the slightest.

“Well, the conditions here, and the terrible pay – of course, I’m fed up with that. But I couldn’t be happier with the kids and the films. I can really feel that what I’m doing here as a teacher and animator is worthwhile. I sense it in the interaction that I have with the kids. And there’s so much more we could be doing here, too...”

The children at Poisk make their films almost entirely without computers; they draw their own characters, cut them out, film the scene, move the characters and shoot them again. “All of the kids have come to believe me when I tell them that the world appreciates things that are made by hand much more than things that have been made by computer,” says Yelena.

“What’s more, they even agree that people can be beautiful not just by having a pretty face or a nice figure. They’ve noticed that, if you look carefully at any kind of beauty, you find imperfections in it. And that’s the basis of our children’s animation. It’s hard work! But oddly enough, it’s work for fidgety people. Of course, we don’t often get kids who are happy to just sit and draw for hours. Kids want to see the end result immediately. Here they can draw, create a story, add some music, compose poems and sing...”

The children at Poisk do not simply doodle: they make movies that follow the rules of filmmaking. It is not just that it is “sweet” that children have made them – the films are genuinely intriguing. When making them, children learn mime, drawing, dance, and the foundations of screenplay.

“Maybe it’s not art, but it’s on the way to being art,” Yelena says. “The sky’s the limit for children; they don’t know any boundaries. It’s only the on the fourth or fifth viewing that you understand what’s involved in them. Although the kids themselves, I’d add, probably don’t understand that meaning themselves. For them, everything around them is alive and exciting. They think things up in a minute, and they’ve got it. You look at them and think: why can’t people stay like this for longer? But of course that’s not possible. It’s not just in school, but even in nursery that they start to be molded. And all their openness closes down...”

Famous Soviet teacher and psychologist, Shalva Amonashvili, said that the teacher should always be a clown. Some people may find that expression unusual or even offensive, but Yelena takes it very seriously. “I have to establish creative contact with a person, so I’m happy to become a clown. All creative activities depend essentially upon atmosphere. I find it easier to set up that atmosphere if I let the kids know that I’m part of the process too, that I’m not in charge of them; I’m along for the ride with them.

Kids don’t get excited by the subject alone, but by the teacher too. When I understood that it is really crucial for kids the way the lesson is set up, I started running them like a kind of show. I don’t mean like a kind of entertainment show, but something which really grabs them. Getting the attention of a bunch of three-year-olds is a whole opera on its own. It’s no easier getting the attention of school-aged children. They’re exposed to such an enormous range of stimuli that it’s practically impossible to surprise them at all. And I always think that my main task is to surprise them...”

The studio-school attracts participants of all ages – from the tiniest students through to adult learners. There is even a mixed group “from 6 to 25” that has been running successfully for two years.

“The real fascination of kids’ films is their wrongness,” Yelena says. “A child cannot do things the way an adult does, when they see something in their own way and don’t know how to hide it. They invent their own language – a language that’s more direct and more substantive than our own figurative language. They create a world of symbols that we struggle endlessly to decode. Grown-up drawings (if they’re not especially outstanding) aren’t interesting to decode. Usually all the information is already there, on the surface. But children’s drawings have deep meanings.”

The children who have been attending the school for more than a year have no trouble appearing in front of an audience. They feel comfortable in front of the camera, with film equipment and on the microphone. They are very happy going onstage at the Education Center for the Firebird annual festival. In the real world, it would be a little peculiar if children were not slightly awed by the huge hall, the large number of people, the bright lights and the camera flashes. Kids from Poisk are already used to the world of theater.