Adjusting to the Magnitsky Act 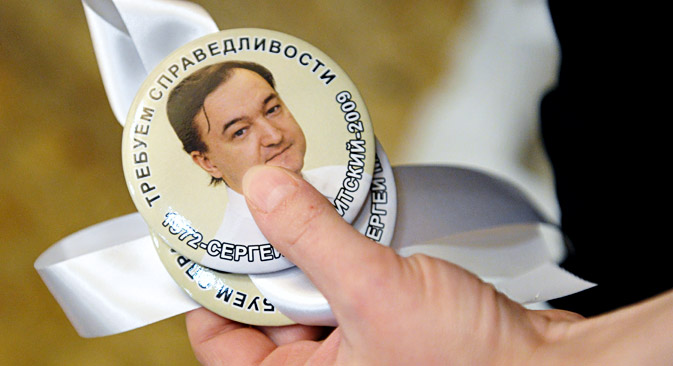 It remains to be seen how Russia will respond to the adoption of the Magnitsky Act. Source: Kommersant

With the Magnitsky Act approved by the U.S. House of Representatives, pundits speculate on what Russia’s reaction to the legislation will be.

The recent approval of the Magnitsky Act in the United States has many Russian experts making guesses as to what extent the move will affect U.S.-Russian relations.  When the U.S. Senate passes a similar bill at the end of the month as expected, the bill will  become law. The senate version has a broader mandate in terms of denying entrance to authorities implicated in human right cases from any country - not just Russia.

On Nov. 16, the U.S.  House of Representatives approved the Magnitsky Act to impose sanctions on the high-profile Russian officials who were allegedly involved in the murder of Hermitage Capital’s lawyer, Sergei Magnitsky. The lawyer died in a Russian prison in 2009, following his efforts to investigate a case of government corruption.

On the one hand, the legislation cancels the Cold War-era Jackson-Vanik Amendment, which was adopted by the U.S. Congress in 1974 to restrict trade with the Soviet Union and other communist countries that prevented the free emigration of Jews.

The repeal of the amendment came in response to Russia’s accession to the World Trade Organization (WTO), since American exporters face economic disadvantages in Russia under WTO regulations.

Nevertheless, the Russian authorities see the Magnitsky Act as an attempt to meddle in the country’s domestic affairs. According to the official website of Russia’s Foreign Ministry, this “highly unfriendly and provocative stance” will inevitably affect U.S.-Russian relations and call for a tough response from Russia.

“Our response will be tough, but not necessarily symmetrical,” said Deputy Foreign Minister Sergei Ryabkov before the approval of the bill on Friday. “Owing to certain sentiments that prevail in the U.S., including on Capitol Hill, our relations with the U.S. seriously lack what we call three basic principles – mutual respect, equal rights and noninterference in internal affairs.”

Russian officials have denounced the bill as interference in domestic affairs, but their American counterparts believe that those involved in the Magnitsky case should be held accountable.

“We will signal that corrupt thugs who attack whistleblowers and human rights activists will be held to account in America, if not Russia,” Rep. Devin Nunes of California told The Washington Post.

Meanwhile, some Russian pundits argue that the U.S. approved the Magnitsky Act because of a lack of cooperation from Russia in investigating the murder of the Hermitage Capital lawyer.

“Initially, Russia didn’t demonstrate enough collaboration in investigating [the Magnitsky case], which provoked the U.S. to adopt the law,” said Georgy Chizhov, vice president at the Center for Political Technologies.

Yury Korgunyuk from the Moscow-based think-tank Indem describes the situation as “serious” and “grave.” Both sides seem unable to come up with a compromise and defend their positions, he stated. The bill only adds to the tensions between the two countries.

Korgunyuk argues that bill will spark political tensions within Russia, and authorities may view the Magnitsky List as a pretext to tighten the screws within the country.

“The list is hardly likely to affect the U.S.,” Korgunyuk said. “Instead, it will have an effect on Russia’s domestic policy. The authorities will use the list as a pretext to punish or pardon its ‘slaves.’ It is the way that Ivan the Terrible did it [the 16th century].”

Yet other pundits sound more optimistic. Gregory Feifer, former correspondent for Radio Liberty and expert on U.S.-Russian relations, believes that Russia’s reaction will be limited and the bill too weak to significantly affect relations between the two countries.

“I don't think the Magnitsky bill's enactment would have a significant impact on relations, both short- and long-term,” said Feifer. “Russian officials have said Moscow would react ‘appropriately,’ and some have raised the possibility of a retaliatory ‘Victor Bout’ law. However, unlike Russian officials who would probably keenly feel a ban on travel to the United States ‒ and other western countries if Bill Browder's campaign continues to succeed there ‒ most affected American law-enforcement and justice officials would have little reason to travel to Russia.

“Although the Kremlin is clearly interested in protecting those connected to the Magnitsky case and the system of corruption they represent, it would like the West to forget the affair. Although the Magnitsky bill is a significant symbolic act, it's already been watered down thanks to White House efforts. Going after the stolen hundreds of millions of dollars Magnitsky uncovered ‒ some of which appear to have been hidden abroad ‒ would be far more effective.”

Yevgeny Minchenko, head of the Institute of Political Expertise, argues that there have been positive signs in U.S.-Russian relations since Russia’s accessions to the WTO, despite the Magnitsky list. However, he admits that the Magnitsky List may complicate the future negotiations between the U.S. and Russia.

“Given the fact that the list contains high-profile Russian officials, it will be difficult to negotiate,” he said. “But Russia, after all, doesn’t have [many] opportunities to respond asymmetrically. That’s why we have to  live with it.”