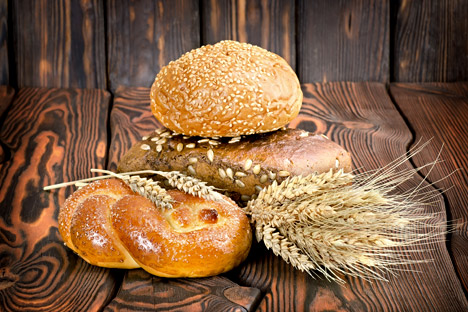 The forgotten bread recipes of the Russian Empire are slowly coming back into fashion. Source: Lori / Legion Media

Today, the Russian bread market is truly global, with baked goods available from almost every corner of the planet — not to mention the products and bread-making traditions of the hundreds of peoples living within the country. Russian bread really does have its own uniquely “Russian” flavor.

In 1836, Count Sheremetyev wrote to the great Russian poet, Alexander Pushkin: “My friend, it's dismal living in Paris. There's nothing to eat, black bread is completely off the menu.”

These words sum up the essence of Russian taste. Black bread (rye bread) was not only the main foodstuff for peasants, it also graced the tables of landowners right up until the 20th century. Rye bread was the staple of the Russian diet for centuries, particularly in rural families: Over a bowl of hot, thick “schi” (cabbage soup), villagers would regularly consume up to two pounds of black rye bread.

Would you like some boiled language as a starter?

Until the middle of the 20th century, bread dough was prepared using a concoction of intoxicating yeasts that naturally caused fermentation. For this reason, such bread was described as sour, as opposed to the unleavened flat breads of Asia. After the appearance of thermophilic baker's yeast in the 1940s and 1950s, the art of baking sour bread began to fade.

However, Russia is currently undergoing a baking boom, with domestic bread-making on the rise, backed by an army of amateur enthusiasts. Recipes for ferments and yeast-free sour rye bread can now easily be found online.

One of the most famous kinds of rye bread in Russia is “Borodinsky.” This is a special kind of scalded bread, which, in addition to flour and yeast, contains all the mandatory ingredients: rye malt, molasses, and coriander. The bread's unique, sweet flavor and aroma is much loved across the former Soviet Union. It is this bread in particular that Russian émigrés long for.

According to legend, it was first baked by nuns at a convent, on the site of the Battle of Borodino between Russia and Napoleon's army in 1812. Another version recounts how the bread first appeared in 1920s Moscow. The recipe for modern Borodinsky bread, whatever its origin, was approved in 1933 at Moscow's head bakery.

There are many new varieties of rye bread, but the older generation still yearns for that distinctive Soviet flavor. Nowadays, modern bakeries use various additives and baking powders to try to reduce production time. Moreover, products in Soviet times were subject to a set of uniform state standards, whereas the quality and taste of bread now depends on the individual producer. Some regions have preserved the old Soviet regulations, for which reason their bread is very popular.

It is known that Joseph Stalin did not understand Russians' love of rye bread. The legendary Soviet food commissar, Anastas Mikoyan, wrote in his memoirs: “Of all the types of grain, Stalin singled out wheat.... He insisted that wheat be sown even in regions where it had never been grown before... For some reason, Stalin considered the cultivation of rye to be inferior, and wheat for him was almost the ‘hub of the universe’... He could not be dissuaded, and the result was a shortage of rye flour...”

White wheat bread became popular in Russia only at the turn of the 20th century, and for common folk it long remained a symbol of wealth and prosperity that was suitable only for special occasions. White wheat bread is made using bleached white flour, before being sweetened and, in some varieties, mixed with oil or fat.

Therefore, it is not as porous as French bread, for example, and the crust is nowhere near as crisp. As Russian like to say, Russian white bread is very filling; in other words, it is nutritious and nourishing, especially in comparison with European bread.

One of the country's most famous white breads is “kalatch” — a fancy type of round roll. Sometime in the 14th century, Russians borrowed the Tatar recipe for unleavened white bread, but in the hands of local bakers, it changed beyond all recognition.

Kalatchi is baked using snowy white flour of the highest sort, but the main attribute of the roll is its special dough, which is repeatedly kneaded long and hard in a cool place. At one time, the most famous types of kalatchi were “moskovsky” (from Moscow) and “muromsky” (from Murom, Vladimir Region).

This bread was a favorite of Empress Catherine the Great, and the coat of arms of Murom has flaunted the famous rolls ever since. Russian folklore is rich in proverbs and sayings about this national product. If only kalatchi themselves were as numerous...

Still, the forgotten bread recipes of the Russian Empire are slowly coming back into fashion. Trademarks are being registered, and every town and city in Russia today not only offers a taste of the once famous breads — kalatchi, krendeli, saiki, baranki — but also a chance to learn about their history.