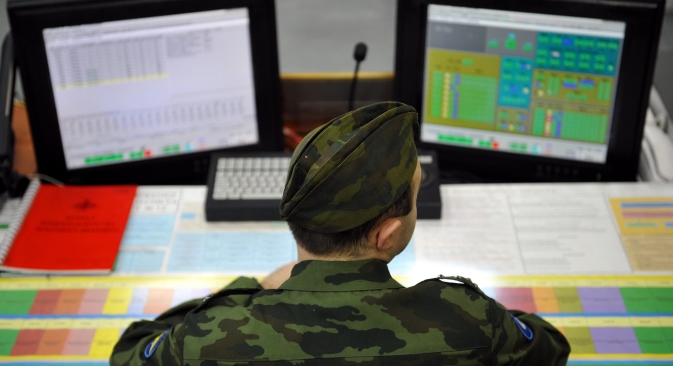 Deployed in February 2009, the Voronezh-DM early warning radars face southwest and cover the area from Southern Europe to the coast of North Africa. Source: ITAR-TASS

With nations possessing nuclear weapons and missile technologies, the ability to detect missile launches in a timely manner is vital for any strategic weapons systems – hence Russia’s current upgrade of its missile attack early warning system.

The Voronezh-DM early warning radars deployed near Armavir in Russia’s Krasnodar Region will start working at full capacity in the first quarter of 2013, according to former commander of Russian aerospace defense troops and new deputy defense minister, Oleg Ostapenko.

“Once the new Armavir radar is commissioned and put on alert, it will cover the Daryal-type Gabala radar station’s zone of operation, and even replace it in this zone,” said Ostapenko.

Deployed in February 2009, the decimeter-range radar referred to by Ostapenko faces southwest and covers the area from Southern Europe to the coast of North Africa. The new station segment will also cover Turkey, Iraq, Iran, India and countries in the Middle East.

Indeed, the role of the early warning radar system cannot be overstated: This is literally a security signaling system that covers the entire planet.

There are widely known cases when a failure in such a system could have resulted in a global catastrophe.

Senior officers were immediately convened to meetings at all three command posts. Launch control centers for Minuteman intercontinental ballistic missiles (ICBMs) were ordered to be prepared for launch. The alarm was raised across the entire air defense system, and at least 10 interceptors were airborne. The National Emergency Airborne Command Post – the president’s “doomsday plane” – was also launched, although the president was not on board.

However, within a few minutes of the alert, the officers reviewed the raw data from the early missile warning satellites and stations circling the United States. The systems showed no signs of a missile attack, so the alert was canceled.

It was later determined that a software program designed for missile attack action drills was inadvertently inserted into a computer running the nation’s early warning programs.

On June 3, 1980, U.S. command posts received another nuclear strike warning. As in the earlier episode, launch units for Minuteman ICBMs were given preliminary launch instructions, and strategic bomber crews manned their aircraft.

This time, however, the computers did not present a recognizable or consistent attack pattern, and the displays showed a changing number of attacking missiles. Furthermore, these numbers did not always agree across the different command posts. Although many officers did not take this incident as seriously as the previous one, an emergency conference was again convened to assess the threat. An investigation showed that a single computer chip failure had caused random numbers of attacking missiles to be displayed.

The most dramatic episode took place at the height of the Cold War. It can be said with absolute certainty that mankind was saved by Lt. Col. Stanislav Petrov, who was hardly known to anyone at the time.

On September 26, 1983, the newly inaugurated Soviet missile warning satellite system indicated an attack from the United States. Soviet satellites monitored the base areas of U.S. missiles at such an angle that they were seen at the edge of the Earth; the system thus detected attacking missiles against the black background of space and identified a launched missile by infrared light given off by its engine. Such a configuration was chosen to reduce the chances that satellite sensors would be activated by sunlight reflected from clouds or snow banks.

As military space expert Yuri Zaitsev said of that day: “It so happened that the satellite, the launching positions of the U.S. missiles and the Sun were aligned in such a way that sunlight was strongly reflected from clouds. The satellite decided that the reflected sunlight was a column of fire coming from the nozzles and transmitted a message that five missiles had been launched from the continental United States.”

According to instructions, the officer in charge of the bunker at Serpukhov-15 in central Russia was obliged in the event of a missile strike to pass the information to the nation’s leadership without hesitation; Soviet leaders would then make a decision on whether or not to deliver a retaliatory strike. The flight time of a ballistic missile from the continental United States to the Soviet Union was about 30 minutes, so Petrov’s options were limited: he could either inform the general secretary, who would then make the final decision with his nuclear briefcase; or he could tell his superiors that the information was false and thus face the consequences.

Given that the Soviet leader at the time, Yuri Andropov, would have had just 15 minutes to make the decision, it is almost certain that he would have believed Petrov and launched a retaliatory nuclear attack. Petrov, however, was not prepared to have the lives of billions on his conscience and acted against protocol. He did not push the button to let his superiors know the country was under attack, despite the fact that the information was checked 30 times, with the same result each time.

In the end, common sense prevailed – after all, people do not start a war with just five missiles. Petrov “did not believe” the computer and thus saved the world.