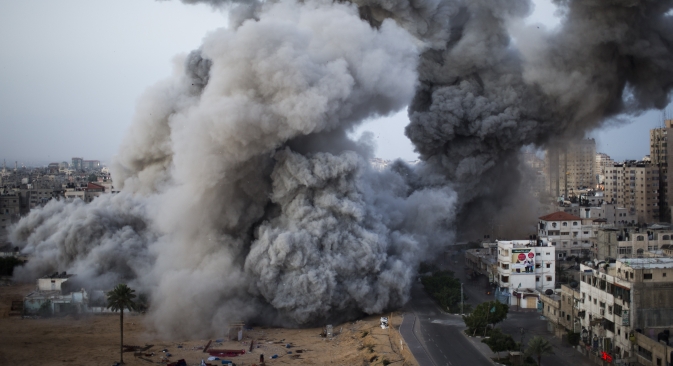 The Israeli military widened its range of targets in the Gaza Strip last Sunday, sending its aircraft to attack two buildings used by both Hamas and foreign media outlets. Source: AP

Yevgeny Satanovsky, the president of the Institute of Middle Eastern Studies, asserts that time has run out for negotiations in the Middle East.

Israel is carrying out its largest operation against Hamas militants in the Gaza strip in four years. The causes of the conflict and its consequences, as well as Russia's role in brokering a peace, were the discussed by the president of the Institute of Middle Eastern Studies, Yevgeny Satanovsky.

Vzglyad: Many observers have noted that Israeli Prime Minister Benjamin Netanyahu could not ignore the Palestinian attacks, and began the operation as a prelude to the upcoming elections. Many have claimed that he came to power in 1996 on a wave of terrorist attacks. Is history repeating itself?

Yevgeny Satanovsky: During his first two terms in office we saw two different Netanyahus, and we'll see yet another Netanyahu if he wins a third. You cannot step twice into the same river. Netanyahu now understands that the peace process has breathed its last. All experiments have been carried out and all have ended in failure.

He's grown older and far wiser, and the country smarter. Let's get this straight: These are not terrorist acts - we're talking about terrorist wars.

Vzglyad:Israel has chosen a favorable moment, with Hamas hovering precariously between Qatar and Egypt. Was the start of the counter-terrorist operation in Gaza deliberately timed or just coincidence?

Y.S.: When it comes to Hamas, Israel has no political schedule. The people who struck Israel were, most likely, members of the Palestinian Islamic Jihad (PIJ) — a rival group with which Hamas has tried to forge an alliance.

The PIJ's intention was to demonstrate its capacity to the Egyptian government and to the Qatari emir, who had just paid a visit to Gaza, thereby giving international legitimacy to Hamas. The rockets started to fly as soon as he left. It was an attempt to supplant Hamas — quite a successful one at that — and to show who's boss.

The PIJ militants tried to raise the stakes by firing on Israeli citizens. The retaliatory strike targeted the leader of the Izz al-Din al-Qassam Martyrs Brigades, Ahmed Jabari, who is said to have commanded Hamas' military wing in Gaza.

That was followed by a systematic purge of anyone linked to the group, since the location and movements of the missiles and militants are well-known.

There'll be a punishing operation in Gaza, and much else besides. Spring or summer will see a war with Iran. The collapse of Syria is also on the agenda. Times are hard for Jordan too, which could also disintegrate.

Vzglyad:Do Qatar and the other Gulf countries — including the United Arab Emirates — share a set of common objectives?

Y.S.: They all have the common objective of wanting to be in charge. The Emirates, meanwhile, have a completely different set of tasks and goals. They have no foreign policy ambitions. They just want to develop their own living space in peace.

Vzglyad:What do you think Egyptian President Mohammed Mursi will do if the conflict in Gaza is prolonged? Will he accept refugees from Gaza?

Y.S.: Mursi won't allow anyone in. His country's population will soon hit 100 million, and there's no spare capacity. Water supplies will soon dry up when new hydrofacilities are built in the Nile's upper reaches. The economy is crumbling. Egypt is a country on the brink of total economic collapse.

Mursi will not play a mediating role between Israel and the Islamists for the simple reason that he is no friend or brother of Israel. His mission is to tear apart the Camp David Accords — and he'll get his way. An Egypt-Israel war is in the cards, which would be far more dangerous than any war with Iran.

Y.S.: The country's economy, social welfare, taxes, and demography are all out of control. But he has to demonstrate somehow that he is, after all, the president. So he must fight for Egypt's downtrodden rights, for the re-militarization of Sinai, and for complete control on all fronts — including the subjugation of rival Islamist factions, be they Salafis or neighboring Hamas.

Vzglyad:What are the prospects for Russia becoming involved in the peace process between the conflicting parties?

Y.S.: Palestinians talk to each other fine without Russia and will continue to do so. As for the Palestinian-Israeli peace process, it doesn't exist — it gave up the ghost in 1999.

The fact that its sponsors continue to pretend that it is still alive is mainly due to the bureaucratic perks behind it: salaries, trips abroad, lounging and lunching at the state's expense. Its real influence is zero.

Russia's role is purely ceremonial. In fact, Russia's interests conflict with those of the region's main players: They all have the same oil customers.

The interview is abridged and first published in Russian in the Vzglyad newspaper.