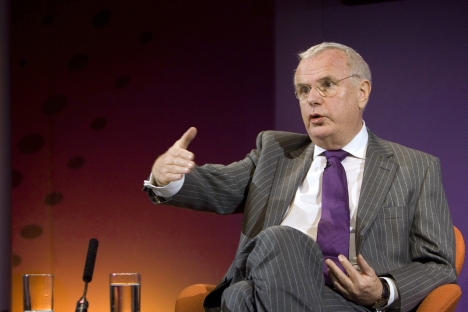 A former commercial secretary to the UK Treasury may be joining the board of directors at one of the “Big Three” Russian mobile phone companies. Experts believe that MegaFon has made the move to calm investors ahead of its IPO.

Paul Myners, a former commercial secretary to the UK Treasury, is to join the board of directors of Russian mobile phone company MegaFon. The matter will be discussed at a general meeting of the company. Lord Paul Myners, who was made a life peer and entitled to a seat in the House of Lords in 2008, has held top positions at a number of major corporations, including mobile phone operators O2 and Orange.

MegaFon hopes that the appointment of Lord Myners will help assuage investors’ concerns ahead of its IPO, says Finam Global expert Leonid Delitsyn.

“This move aims to mitigate risks for potential buyers of MegaFon shares: Because it is one thing to buy into a Russian company, but a totally different thing to deal with a man who knows this business, has relevant management experience and is capable of protecting investors’ interests,” Delitsyn said. “It is more than a simple image-making move, because we cannot say that this man will be an ordinary board member. Naturally, he will have access to certain information, and he will have some influence on decision-making.”

Foreign officials have repeatedly been invited to work for large Russian businesses.

In January 2006, Uniastrum Bank invited former Chancellor of the Exchequer Lord Norman Lamont to head its advisory board. The decision was made as part of the bank’s preparations for making an IPO, to give a boost to its international projects.

In March 2006, former Chancellor of Germany Gerhard Schröder became chairman of the shareholders’ committee of North European Gas Company (later renamed Nord Stream), which is the operator of the North European Gas Pipeline construction along the bottom of the Baltic Sea. In 2009–2011, Schröder served as an independent director for TNK-BP.

Former NATO Secretary General Lord George Robertson has been vice chairman of the board and head of the audit committee at TNK-BP since October 1, 2006. He served as NATO secretary general from 1999-2003 and as UK defense secretary for two years prior to his NATO appointment.

Many Russian companies are willing to have foreign officials on their boards. However, it is often hard to persuade them to come to work in Russia, says Aleksander Artemyev, a partner at Berkshire Advisory Group.

“It is not about compensation and bonuses, but the so-called reputation risks. Before accepting or turning down a proposal, such people study the company, its history, its activities, and consider the possible financial and reputation risks that may emerge as soon as some high-ranking official agrees to join it. It is only at a later stage that he thinks about compensation and other issues,” Artemyev said.

There are currently seven members on the MegaFon board: the largest shareholders – Telecom and TeliaSonera – each nominate three members, while Swedish entrepreneur Jan Rudberg serves as the company’s independent director.