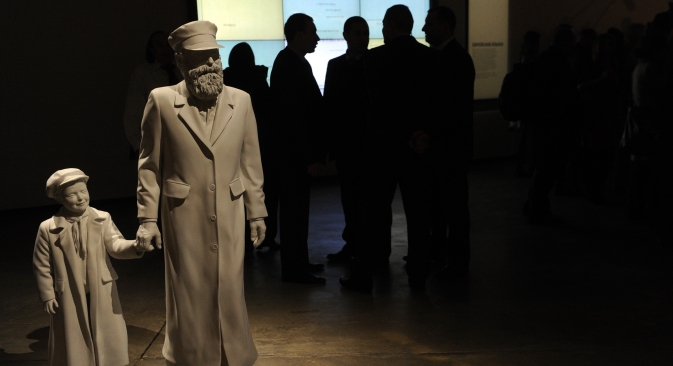 The Jewish Museum and Center of Tolerance is clearly not a museum “created by Jews and for the Jews,” but a place to improve the image of Jewish people among the Russian population. Source: ITAR-TASS

An impressive collection of historical documents and documentary films retraces the last two centuries of Jewish life in Russia. The first Jewish Museum in Russia was financed by private funds and opened to the public on November 12, 2012.

Israeli President Shimon Peres traveled to Moscow for the inauguration of what is now the largest Jewish museum in the world. It occupies a little less than 91,500 square feet of the Bakhmetevsky Bus Garage — a constructivist building erected in 1927 and designed by famous architect Konstantin Melnikov.

Israeli president attends opening of Museum of Tolerance in Moscow

Until 2011, the Garage housed a very popular contemporary arts center. The Federation of Jewish Communities of Russian, which has owned the building since 2001, spent 10 years developing the plan to open a museum here. This became possible after a lengthy quest managed to raise $50 million from private donors.

The result is nothing short of remarkable. The museum’s design, its rich collection and the emotions it elicits has made it one of the Russian capital’s must-see places, and Moscow is certainly not short on interesting sights.

“We thought of the museum as a chronological journey along two axes, both leading up to World War II,” said Ralph Appelbaum, the museum’s designer. “With the exception of the T-34 tank that liberated Europe, we have very few original objects. Instead, we concentrated our efforts on the collection and creation of documentary films.”

The clever lighting arrangement draws visitors’ attention to the huge photographs on the walls. Sculptures and artifacts describe Jewish life: From the 18th-century “shtetls” (villages with an overwhelmingly Jewish population) Jews were confined to by the Czarist government, to their lives in the large cities in the 20th century.

The tour begins with a 10-minute film entitled “The Beginning,” which covers the time from the Creation to the start of the Diaspora. Leaving the cinema, visitors are greeted by a large “emigration globe” illustrating the unique geographic dispersal of the Hebrew people. Life-size models with holograms, videos and sculptures recreate the interiors of Jewish homes in shtetls.

Then, there is the exodus to the large towns in the late 19th century, retraced using the example of the open city of Odessa, where one can sit at the table of the author and dramatist Sholem Aleichem (the pen name of Solomon Naumovitch Rabinovitch) and those of other local Jewish personalities. Ralph Appelbaum sits facing the humorist Aleichem and points to the virtual books on the table, all of which have an iPad-like touchscreen. The books open like menus.

The Jewish Museum and Center of Tolerance. Source: RussiaNowTV

“History is not always a fascinating subject for young people,” said Appelbaum, one of the most respected museum designers in the world. “Our efforts are mainly directed at young people. We use social technologies like voting, with interactive knowledge tests and touchscreens, to make knowledge child-friendly.”

The historical tour has not been watered down. In the center of the museum, where the two main axes converge, there sits a huge panoramic screen on which images are projected that document the most tragic moments of World War II: Babi Yar, the mass executions carried out by the Nazis, the Siege of Leningrad, the Battle of Stalingrad and the final victory. There is a pyramid-shaped memorial in front of the display where visitors can light a candle in memory of the millions of victims whose names scroll endlessly on the huge black screen.

The museum stresses interactivity and openness to the widest possible public, especially young people. This effort to look outward marks a desire not to fall into communitarianism or sectarianism — a prejudice of which the Jewish people are so often the victim. This is clearly not a museum “created by Jews and for the Jews,” but a place to improve the image of Jewish people among the Russian population.

“The idea is to emphasize the diversity of the peoples living in Russia,” Appelbaum said. “Whatever your ethnic origin, you can affirm it as such in Russia.”

Hence the museum’s full name: The Jewish Museum and Center of Tolerance, which appears to be something of a sacrifice to “political correctness.” The VIPs who attended the inauguration all showed their respect for President Vladimir Putin, “who immediately supported the idea of a new Jewish museum,” said Aleksander Boroda, president of the museum and of the Federation of Jewish Communities of Russia.

Indeed, there are noticeably fewer exhibits covering the darker episodes in Russo-Jewish history. These include, for example, the pogroms of Czarist Russia and the “Protocols of the Elders of Zion” forgery fabricated by the Czar’s police force, which continues to do damage to this day. Emphasis is instead placed on the persecution endured jointly by both peoples during World War II.

In the message sent by Vladimir Putin for the inauguration, the president recalled that both peoples are proudly determined to defend the memory of that tragic era and to combat any form of revisionist history. Despite a little diplomatic gloss, the Jewish Museum is indisputably one of the most effective memorials in the world today.