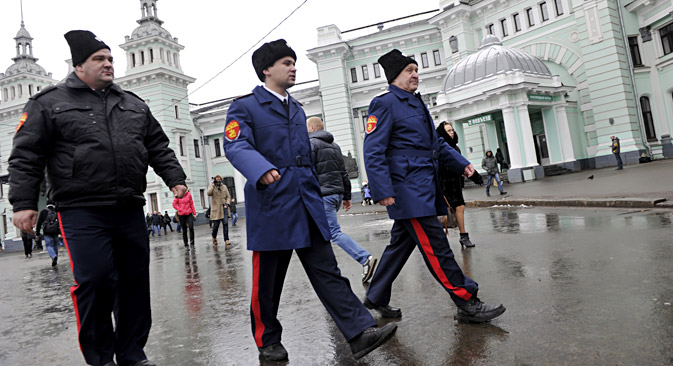 A new political force has emerged in Russia. Seven million Cossacks are patrolling cities, joining the National Guard and getting ready to form their own political party. Kommersant Vlast attempts to find out who they are and why the state needs them.

“Grab the knife, turn the cutting face away from yourself, push with your left foot and cut your enemy open, anything you see – the face, the throat, an arm. Then stab him again to finish him off. Good!”

It is a cold November night – minus five degrees Celsius – in the Moscow suburb of Sokolniki, where a Cossack hand-to-hand combat practice is taking place. There is no air conditioning unit in the training hall.

Instead, the window is wide open, letting in the chilly air. There are two icons on the walls. A couple of pillars are padded to practice kicks. There are 12 students: eight men and three young women. One of the young women is accompanied by her mother – she has turned up late and just finished putting on her military fatigues, with a khaki neckpiece tied under her chin.

Their coach Dmitry Nenarokov (also wearing fatigues) is a priest who is part of the Moscow Patriarchy of the Russian Orthodox Church.

“Normally we use blunt wooden knives. You can get injured if you use real knives. Even blunt steel knives cut through fatigues, and you can cut someone’s throat if you’re not careful,” he said.

Nenarokov goes into the utility room and gets a metal knife, which looks like an ordinary kitchen knife.

“It is not sharp, but it can cut through a piece of meat.” He goes back into the hall. “Aleksei has cut me twice, which means I’ve got about 30 seconds to live. Then, we’re going to hang a lamb’s carcass out there, and you’ll see how a penknife can crash into it and break ribs.”

Nenarokov is a “sotnik” (or centurion) of the “Vostok” Moscow municipal Cossack society. The Moscow society is comprised of six so-called “sotnya” groups, each of which includes 150 members.

Nenarokov works as a coach at the physical education department of the Federal Security Service’s Moscow Border Guards Institute, where he teaches hand-to-hand combat. He also serves in a small church at the institute, which provides guidance for the students. Nenarokov lives in Moscow. He was born and raised in Sokolniki and graduated from an architecture university.

“Cossacks are warriors by nature. They yearn for action,” he said. “You can’t put them in a box and tell them to wait. We waited for 20 years. The state regards Cossacks as a potential regular military force, which can be summoned in case of emergency.”

Why does Russia need Cossacks? 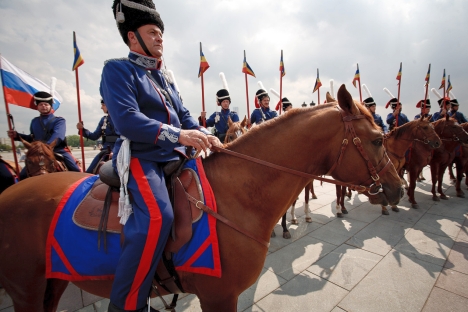 When pledging allegiance to the state and being entered in the register, Cossacks agree to perform public service. Source: Ruslan Sukhushin

Seven million Russians consider themselves Cossacks. There are 11 Cossack troops on the state register, with a total of 400,000 active members. All of these troops are expected to be merged into a single All-Russian Cossack Army by the end of this year. The Cossack leader (also known as the ataman) will be headquartered in Moscow and report to the commander-in-chief – that is, to the Russian president.

Vladimir Putin became a Cossack back in 2006 and currently holds the rank of Cossack colonel. Before the 1917 revolution, only Russian czars held this rank. It was Dmitry Medvedev that began the process of unifying Cossack troops in May 2011.

Video: Moscow turned into a Cossack village for one day

Aleksander Beglov, chairman of the Presidential Council for Cossack Affairs and presidential envoy in the Central Federal District, told Kommersant Vlast that there are three paths available for a man who considers himself a Cossack: to engage in public work, thus reviving Cossack traditions; to become a civil servant, which entails having your name put “on the register”; or to “remain a Cossack.”

To become a civil servant, some requirements indicated in the Statute of Cossack Society need to be met. Specifically, a candidate should “be a Russian citizen, at least 18 years of age and share Cossack ideas.” Also, candidates must have no criminal record and abstain from alcohol.

Cossacks include members in the register by a simple majority vote; the decision is then approved by the ataman. Applicants give an oath, kiss the cross and gospel, receive the blessing of the priest and a “mandate from the father” – a lashing from a whip.

Cossacks cannot be atheists. A Cossack circle – a general military council of Cossacks – cannot be held without a priest present to bless the event. There is a synodic committee in the Russian Orthodox Church responsible for relations with the Cossacks, and it is headed by Metropolitan Kirill of Stavropol and Nevinomyssk.

The secular interests of Russian Cossacks will soon be asserted by Russia’s first Cossack Party. Its founding congress will be held in the Greater Moscow Area in late November.

When pledging allegiance to the state and being entered in the register, Cossacks agree to perform public service.

“There are 15 kinds of service that Cossacks can be involved in,” said Nenarokov. “We provide military, non-military and pre-draft training. We ready ourselves to protect the rule of law. We have 3 sotnyas of airborne troops in Moscow; one sotnya of intelligence agents, as well as a very strong combined-arms sotnya here.”

The authorities are interested in turning the Cossacks into a national guard, he says.

“The new strategy has the following agenda: a few million Cossacks will stay in reserve. They will be paid 15,000–18,000 rubles per month for staying in reserve and being ready for military service within one hour. They will also have regular combat training.”

However, the Presidential Council for Cossack Affairs denied that reserves would receive a monthly salary. 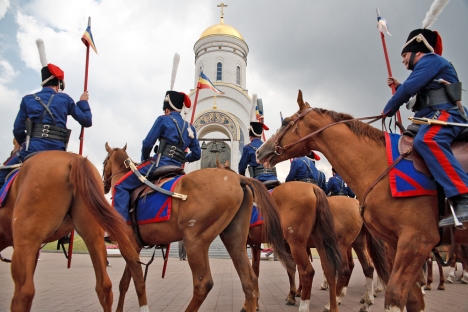 Cossacks cannot be atheists. A Cossack circle – a general military council of Cossacks – cannot be held without a priest present to bless the event. Source: Ruslan Sukhushin

Regional authorities will also be able to offer registered Cossacks paid work. In August 2012, Krasnodar Region Gov. Alexander Tkachyov decided to allow Cossack patrols in Krasnodar streets. He said in an interview with Kommersan Vlast that the administration would be paying Cossacks the same wages as police officers.

Cossacks to tackle crime in Moscow 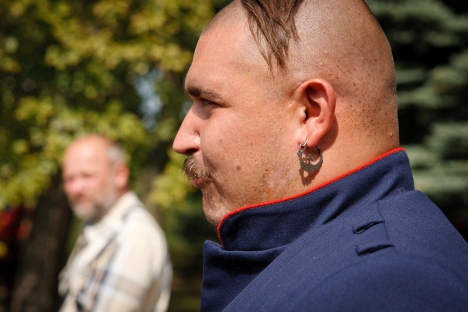 Moscow launched a project similar to Tkachyov’s sensational initiative more than a year ago; a force of 80 “Yugo-Vostok” Cossacks, led by Sergey Shishkin, has been patrolling the southeastern district of Moscow since October 2011.

The militia service was initiated by Vladimir Zotov, the prefect of the district. Zotov himself is a Cossack colonel, serving as an aide to the ataman of the Central Cossack Army. Zotov told Kommersant Vlast that registered Cossacks are not paid. They are only offered free seasonal tickets on the city’s public transport and sharp red-and-blue uniforms. Cossacks go on duty armed with whips, but they are supposed to leave their sabers at home.

“Cossacks help us during mass events. They help fight illegal trade in Lyublino,” the prefect said. “Thanks to Cossack patrols in Kuzminky and Lyublino reservoirs, we have seen a reduction in drowning deaths.”

“People tend to trust Cossacks more. You can see the way people react to Cossacks - hooligans react to them,” said Zotov.

Tkachyov also spoke about how close Cossacks are to ordinary people. “They will keep an eye on immigrants… Cossacks represent the nation, and you don’t want to fight with an entire nation,” said Tkachyov. “Police officers have legal restraints, but it is simpler with Cossacks: you mess with a Cossack – you mess with the entire nation.”

The article is abridged and first published in Russian in the Kommersant-Vlast magazine.