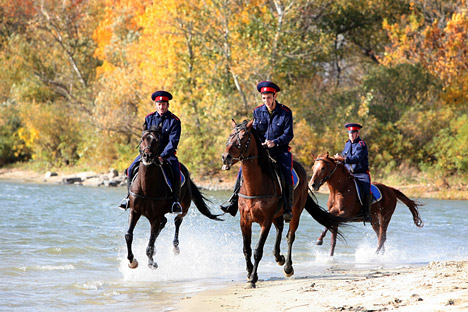 The governor of Krasnodar Territory attracts some unwanted attention with a controversial proposal.

“We don’t have another way; we will push out, clean up, ask for documentation that deals with the migration policy,” Tkachev said.

According to the governor’s project, the Cossacks will have the right to demand to see documents, transfer offenders to the police, as well as check entertainment and recreational facilities. Participants in the patrol will be dressed in a Cossack uniform, but cannot carry weapons.

Tkachev justified his proposal by noting that the Krasnodar Territory has the same potential for a shift in the ethnic population as the Balkans, and he wants to prevent another Kosovo. However, the governor’s comments showed that he has a tenuous grasp on this history. In his statement, he confused Serbs and Croats: “We see this in Yugoslavia - the Albanians, Croats ... First, the Croats were 80 percent, Albanians – 20 percent. Then it became the opposite, literally in 50 years. They began to tear down temples, their culture and religion began to dominate, then conflicts started, expelling, blood, a small war, a big war. And that was it – no country, no people, thousands of refugees.”

Tkachev’s statement immediately launched a debate in the Russian media. According to a number of analysts, the populist speech of the governor represents an attempt to strengthen his position in the region, which was significantly shaken after the recent devastating floods in Krymsk, and distract the public from the incompetent actions of local and regional authorities to prevent catastrophes.

TV presenter Maxim Shevchenko believes that the governor's initiative is a direct violation of the Constitution and “may have very serious consequences.” The Russian Constitution guarantees to all citizens of Russia freedom of movement regardless of ethnicity, and such actions may easily be regarded as failure to recognize the territorial integrity of the Russian Federation.

Tkachev’s proposal received a mixed reaction even from the Cossacks themselves. According to Igor Lovginenko, Ataman of the Terek Cossak Army of the Union of Cossacks of Russia, to engage in unlawful acts must be “on general grounds,” without regard to ethnicity or point of origin. “There is the Constitution, there is law, before which all must be equal. I believe that the governor of Krasnodar Territory, where, incidentally, representatives of 120 nationalities reside, must be more correct,” Logvinenko said.

The representatives of the Caucasian diaspora reacted with indignation to the Tkachev, saying that such statements could lead to inter-ethnic violence. According to Aliy Totorkulov, chairman of the Ppesidium of the Russian Congress of Peoples of the Caucasus, the governor’s decision could result in hostility directed at the natives of Dagestan, Ingushetia and Karachaeyvo-Cherkessia who are working on the construction sites of the 2014 Winter Olympics.

Tkachev’s statements sounded especially inappropriate against the background of the Olympic Games currently taking place in London, where a number of Russia’s gold medals were won by natives of the North Caucasus republics. Krasnodar native Arsen Galstyan, who was born in Armenia, won Russia’s first gold medal, and gold medalists Mansur Isaev and Tagir Khaybulaev are natives of Dagestan.

Combined report based in the information from RIA Novosti, Gazeta.ru and Kommersant Daily.