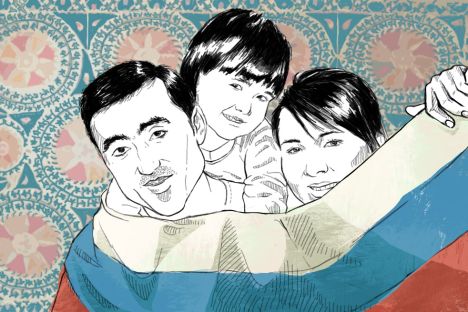 Diasporas help them survive, but not integrate into Russian society.

Today, the bulk of immigrants to Russia come from Central Asia, and the trend is likely to remain over the next 10-15 years. The most recent Russian census showed that the number of Uzbeks, Tajiks, and Kyrgyz living in the country had roughly doubled since the previous count.

Opinion: Dealing with the migration bureacracy

The increasing number of migrants in Russia is partially due to the fact that the very concept of “migrant” has changed several times in recent years. Until 2007, “international migrant” was an umbrella term for Russian citizens who had moved to Russia and foreigners in possession of a residence permit. In 2007, the category was expanded to include those with just a temporary residence permit: consequently, the number of documented migrants rose sharply. Then, in 2011, an even more significant change occurred: a “migrant” was now anyone who came to Russia for longer than nine months.

The liberalization of Russia’s immigration laws is a work in progress. In contrast to many other areas of poly, the success of migration policy is relatively easy to assess: if the ratio of legal to illegal migrants goes up in favor of the former, everything is fine. If not, some tinkering is required. A new concept for State Migration Policy has already been adopted that should help solve some of Russia’s problems with its migrant population.

Primarily, the issue concerns the integration of migrants: the permissible length of stay for labor migrants is set to change, and new categories of foreign workers are to be introduced. These are important decisions. As things stand under current law, labor contracts with migrants (with the exception of highly qualified specialists) may be concluded for only one year and then renewed every six months thereafter. Now tell me: what employer would spend time integrating an employee who will leave in one year? Hence, it makes no sense to talk about adaptation and integration programs in Russia. If a person is working illegally, he won’t even be included in any such program. In case of emergency, he can generally only rely on the local diaspora, which, of course, helps him survive, but not adapt to Russian society. When it comes to integration, the diaspora often plays a negative role: recall the example of the Turkish diaspora in Germany. To prevent diasporas from becoming intermediaries between the state and the migrant population, the law needs to change. For example, growing numbers of women migrants come from Central Asia to be with their husbands. Many of them arrive in Russia illegally, and then give birth. By ignoring the integration of women and children, we are building a time bomb. We need government programs that permit immigrant families to be together, which, incidentally, many countries have implemented. The reason is simple: a family man is more responsible than his single counterpart. In addition, when a migrant’s children go to a Russian school, he himself integrates more quickly into Russian life through their influence.

Of course, the problems of integration are closely related to the labor market. It is highly desirable that migrants know where they will work before arriving in Russia. However, the country is not well oriented to the needs of the labor market. The list of vacancies includes engineers and circus workers... Since 2010, new mechanisms have been introduced to select migrants with the focus on highly qualified professionals. But the criteria for inclusion in this category remain controversial. The definition of a highly skilled migrant is someone who earns more than RUR 2 million per year (RUR 1 million for scientists). That is a high bar. In Voronezh, for example, such professionals number just five, while highly skilled and educated migrants are in abundance.

In general, it should be noted that migrants in Russia are more educated and forward-looking than, say, Arab immigrants in France. The practical influence of the Soviet Union is still felt today. Yes, nowadays most come from remote hamlets and villages, and young migrants often have a poor command of Russian and are not suited to life in Russian cities. However, I regularly travel on business to Central Asia and see that the locals are very interested in getting to grips with Russian culture and language. This is a region where Russia is still recognized as a civilizing force. In a small village 90 km from Dushanbe, people begged their physics teacher to teach them Russian language and literature. The teacher himself speaks the language poorly and there are no textbooks, but the craving for knowledge is extraordinary. Getting into a Russian school in Tashkent, Ashgabat, Samarkand, Dushanbe, and other cities, is difficult: the competition is fierce. Even people from the provinces try to send their children there. It happens that former Soviet soldiers retrain as Russian teachers. All across Tajikistan, Uzbekistan, and Kyrgyzstan, Russian channels are available via satellite. In rural areas they watch Russian news and serials, straining to understand the language. Meanwhile, Iranian and Turkish channels do not get a look-in. All of this suggests that the problem of integrating migrants can be solved.

Mikhail Denisenko, deputy director of the Institute of Demography, Higher School of Economics.