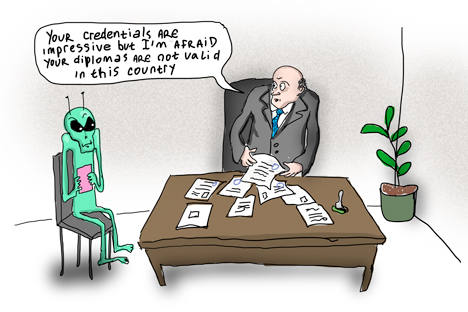 Foreigners wishing to work in Russia and the companies that want to employ them face numerous hurdles and red tape.

Russian immigration legislation makes it difficult for foreign citizens to work in the country and for Russian companies to hire them.

Currently, the biggest obstacle for companies that wish to hire foreigners is the quota for foreign labor. The Russian government requires any company wanting to employ foreigners to apply each year for a quota position for each foreigner they plan to hire. In order to receive the quota, the company has to prove among other things that the jobs in question could not be filled by Russians.

After the company receives a quota for needed position, the process for hiring a foreigner is far from over. The company must then request a permit to hire a particular foreigner and a personal work permit for foreign employee. As part of this process, the potential employee must provide proof of his or her education, demonstrating qualifications in the relevant field. If the proof of education is from a foreign institution, the proof is needed to be additionally legalized in country of document’s issue, then translated into Russian and notarized on the territory of Russia.

Although most hiring requirements apply to all foreigners, more and more, Russian labor law is making exceptions for certain classes of employees.

In 2010, a new category for employee, the highly qualified specialist, was created to make the hiring process easier for some foreign workers. Those who have proper labour experience and meet the requirements for this category now receive work permits and multiple work visas through an expedited process, and the work permits and visas are good for three years.

At the same time, under recent changes to the law and the practice of the Federal Migration Service, citizens from the former Soviet republics face additional challenges in obtaining permits to work in Russia. Previously, these immigrants could apply for work permits for themselves, but now they must ask an employer to request a work permit for them – and that employer must have a quota for hiring of foreign employees. The government has also shortened the time a foreigner who is fired from a job can remain in the country. Now an unemployed migrant has just 15 working days to find a new employer and sign an employment contract on the basis of the same work permit after being dismissed from the previous company. Otherwise, he forfeits the status of foreign worker on the 16th day and can only stay in Russia with private purposes for a maximum of 90 days from the date of last enter Russia.

Citizens of Kazakhstan are excepted from these rules, however. As of Jan. 1, Kazakh citizens no longer need work permits to be employed in Russia.

Russia does have a problem with an influx of illegal foreign workers, and many of the laws put into place by the Federal Migration Service are attempts to combat this problem, but often the laws take aim at the wrong target. Foreigners who enter Russia legally on the basis of visa are concerned about following all the rules for fear they could be denied a visa in the future, but increased laws against illegal labor migration mainly come in visa-free regime is unlikely to deter those who are already living in Russia illegally, as their quality of life living illegally in Russia is already better than it would be back home.

The Russian Government must, of course, be concerned about the well being of its own citizens and sees changes to immigration laws as part of a solution to the problems of unemployment and inter-ethnic crime. Yet to suppress the symptoms of a disease without getting to the root cause – which is primarily economic at this stage – only makes matters worse. Unless control at the stage of entry by foreigners into Russia is improved, tough punitive measures may simply lead to more sophisticated methods of hiring cheaper illegal labor and to growing corruption.

Julia Yakhina, director of the Migration Department at the law firm LEVINE Bridge