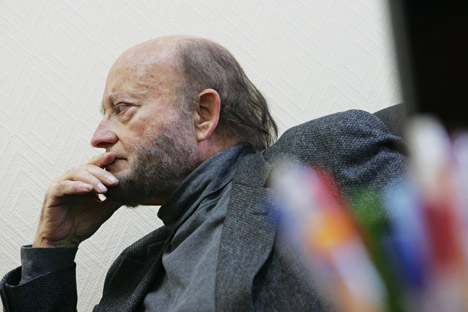 American sociologist Ronald Inglehart: "Liberalization is a long-term global trend, and, in some sense, Russia is already heading that way." Source: ITAR-TASS

American sociologist Ronald Inglehart talks to the Ogoniok magazine on the values of Russian society.

The World Values Survey project has reported its results. American sociologist and political scientist Ronald Inglehart, after 20 years of research, tells Ogoniok magazine’s Sergei Melnikov about what values are important to Russian people.

Ogoniok: In what way do Russians differ from the rest of the world?

Ronald Inglehart: Rather than looking at a single poll, much more can be learned about the inhabitants of a country by studying the dynamics of changing values. For Russians, the collapse of the Soviet Union created an ideological vacuum, which was followed by an economic collapse: our surveys show that many Russians became discontent quite abruptly. Satisfaction with life in Russia bottomed out in 1999, when its indicators came close to those of African countries.

Since 2002, the country has witnessed an overall rise in subjective happiness, although the process is very slow. The fact is that those who describe themselves as happy tend to be under the age of 30.

Ogoniok: It's not surprising that young people describe themselves as happy, because the young are active and carefree...

R.I.: By no means are all young people happier than their parents. Our first study in Russia, in the 1980s, recorded no such age divide. Today in the West, for example, happiness is fairly evenly distributed across the age range.

In 1970, I developed the concept of post-materialism. It essentially states that, in Western democracies, young people’s values shift from purely physical and economic survival to self-expression, civil liberties, environmental protection...

That was the decade when the post-war generation came to the fore, having grown up in a time of economic recovery. Overall, the ideals of that generation have been realized: Western societies have become more tolerant and overcome gender inequality, and other areas of life have seen a shift toward post-materialism.

Now, the gap in values between 30- and 50-year-old Europeans is almost non-existent. But we still see it in Russia.

Ogoniok: Could the post-Soviet generation change the face of the country?

R.I.: Probably. We are talking not only about Russia, but also about Ukraine, Belarus, and even China, which, despite the ruling Communist Party, lives by the laws of market economics; and the values of its people are changing accordingly.

Ogoniok: In what way does Russia differ from the West and other countries?

R.I.: In Russia, an interesting paradox can be observed: your country is quite secular, but in contrast to Western countries, there is growing religiosity. That is understandable: the collapse of communist ideology created a spiritual vacuum that had to be filled.

We are seeing a renaissance of Orthodox Christianity and Islam, which our findings in Tatarstan back up. Every person needs a system of beliefs. Many in the West, for example, believe in human rights, gender equality, and environmental protection.

Ogoniok: It is a commonly held view that Russia must tread its own path, and that the country is not ready for democracy. Is that so?

R.I.: I can only say that Russia's path in the 20th century was one of terrible tragedy and great misfortune. Because of this, your country harbors strong authoritarian traditions, which finds expression in bureaucracy of a kind I have not seen in any other country where I've lived.

What's more, in Russia, values of self-expression prevail over values of survival only in a portion of young people; but, if the economic trend continues, the former will soon become dominant.

Liberalization is a long-term global trend, and, in some sense, Russia is already heading that way.

Ogoniok: So the only direction to take is the one toward post-materialist values?

R.I.: It is the only forward direction. People are happier if they live in a tolerant society: in intolerant societies, both the oppressors and the oppressed experience a constant state of anger and frustration.

The article is abridged and first published in Russian in the Ogoniok magazine.