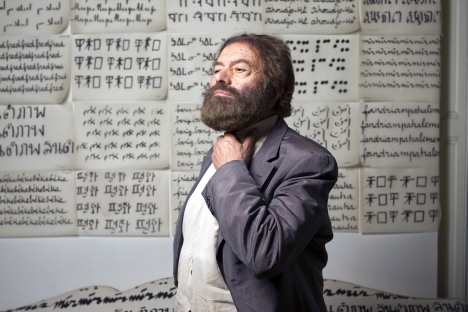 Writer and director Marek Halter: "When I was born, 11 million people spoke Yiddish. And then I come to Siberia, where signs on the houses are all written in two languages and children are taught Yiddish at school." Source: AFP / East News

Yiddish may be dying out in Europe, but it is still very much alive in Russia’s Far East. In the Jewish Autonomous Region, a territory along the Russian-Chinese border created by Stalin as a Jewish homeland, all schoolchildren learn Yiddish as part of the curriculum, even though students of Chinese and Korean descent often outnumber Jewish ones.

Israeli president attends opening of Museum of Tolerance in Moscow

In an interview with Yulia Larina of Ogoniok magazine, Marek Halter, writer-director of the film “Birobidzhan, Birobidzhan!,” filmed in and named for the regional capital, discusses this incongruous situation.

Ogoniok: Why do people learn Yiddish in Birobidzhan? Who are these people going to speak Yiddish with?

Marek Halter: They’ll talk to each other. I was in one school in Birobidzhan where many of the pupils are Chinese and Korean, and I talked to a Chinese mother waiting for her son by the school gate. I asked her why she thought her son needed to learn Yiddish. Her answer was simple: “You can never tell what will come in useful later in life”.

I thought: There are 1.4 billion Chinese people on the planet, and 14 million Jews at the most, and of them, only about 150,000 speak Yiddish. And this Chinese lady thinks that 20-30 years down the line her son might need Yiddish. But she’s a clever woman. For example, there are no longer any Yiddish-speaking Jews in France, but Yiddish words often crop up in French jokes.

Marek Halter, a French Jewish writer and human rights activist, was born in Poland to a mother who was a Yiddish poet. During World War II, his family was sent to Uzbekistan, although they later settled in France. Halter’s Jewish identity has featured heavily in his work. His novels include The Wind of the Khazars (2003) — a piece of historical fiction about the Khazars, a nomadic kingdom of Turkic people in the Caucasus who converted to Judaism.

Ogoniok: Over the years Yiddish has been artificially kept alive by the state in the Jewish Autonomous Region. It is thanks to government support that the language has avoided extinction.

M.H.: You are right. It is quite a strange situation. When the film was aired in Russia, a piece about Jewish theater was not included, and for me this was quite an important part of the film. In Europe people generally build a church first, and then a town or a city. Along with Manaus in Brazil, Birobidzhan in Russia is one of just two cities in the world that were built up around theaters.

People lived here in huts, but the first proper building was a national Jewish theater. Lazar Kaganovich, Stalin’s Minister of Railways and the principal Jewish figure in the Soviet political elite, came to Birobidzhan in 1936 to officially open this theater, and he spoke Yiddish. The theater is still in operation although today the plays are performed in Russian.

Ogoniok: Chief Rabbi of Russia Berel Lazar says in the film that the project for building Birobidzhan was wrong, and that a person should live somewhere comfortable. Does it not seem to you that creating the Jewish region so far away from Moscow and in such harsh conditions was a form of anti-Semitism?

M.H.: You are right. Jewish people wanted the Autonomous Region to be built somewhere they were already settled. It was wrong to send Jewish people so far away. But still, for me, Stalin and Hitler are very different. I was born in Warsaw. My first memories are of the Warsaw ghetto. We managed to escape the ghetto and get to a part of Poland controlled by the Red Army. I am alive today only because the Soviet Union helped us.

I never set out to make a political film. I just wanted to share some of my memories. When I was born, 11 million people spoke Yiddish. And then I come to Siberia, where signs on the houses are all written in two languages and children are taught Yiddish at school. I saw Jews, the likes of which I hadn’t seen in 50 years. The very same. With the same accent. With the same songs.

The interview is abridged and first published in Russian in the Ogoniok magazine.