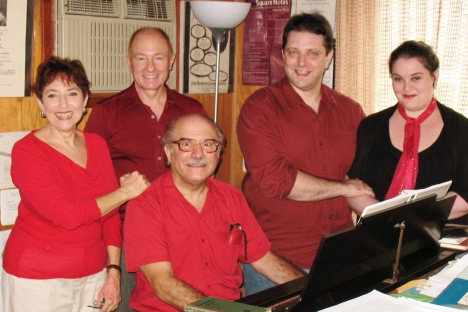 Leanard Lehrman, center, with participants in the mini-festival. Source: PhotoXPress

A prolific composer, director, chorus master, writer, conductor, pianist and translator of operas, Leonard Lehrman seemingly has an endless stock of music and reminiscences for every occasion. His first full-time job was as an assistant chorus master at the Metropolitan Opera, where he coached the choir in Russian pronunciation for its first performance of Tchaikovsky’s opera “Evgeny Onegin.”

He has also translated Mikhail Glinka’s “A Life for the Tsar,” Alexander Dargomyzhsky’s “Rusalka” and Modest Mussorgsky’s unfinished “Zhenitba.” Lehrman’s  mother was a native of the central Russian city of Samara, and the themes of Russia and politics have always been reflected in his own compositions.

Lehrman’s latest endeavor is the Russian Opera Mini-Festival on Long Island, taking place in late November and early December. It features many of Lehrman’s own compositions and Russian-themed works by others. The songs are performed by soloists from the Metropolitan and Bronx Operas.

Each concert in the festival begins with a song from American composer Marc Blitzstein’s musical on U.S.-Russian friendship, “Goloopchik.” Called “The Russian Language Song,” it playfully describes the use of affectionate diminutives in the Russian language. “Mary had a little ovechka,” starts the song, and other familiar words are Russified throughout the nursery rhyme.

The concerts also feature “The Wooing,” a one-act opera based on Anton Chekhov’s short story “The Boor.”

In the tale, a boorish man comes to the home of a widow to demand payment of a debt by her late husband; the two start arguing and end up falling in love. Lehrman says he came across a libretto of the piece by Abel Meeropol’s (a.k.a. Lewis Allan), originally written for Elie Siegmeister, Lehrman’s mentor and teacher in composition.

Said Lehrman, “after [Siegmeister’s] death, there was this treasure trove of works he had left behind. Eight versions of “The Wooing” were found, each more elaborate than the last, but I chose the first one, which was the most simple and direct.”

The themes of Russia and politics have always featured in Lerhman’s compositions, from his first musical, “The Comic Tragedy of San Po Jo,” which is about atomic testing, to “A Musical Portrait of Emma Goldman,” to the piece he is currently composing, on Alger Hiss.

Said Lehrman, “There have been political motives in many of my works, for example, A Musical Portrait of Emma Goldman. She was very much for free speech and freedom from war, a woman very much ahead of her time.” The Russian angle is also omnipresent – “There’s a whole scene in Russian, with simultaneous English translation, in which the Russian-American anarchist argues about human rights with Lenin,” Lehrman said.

Voluble, enthusiastic and tireless, Lehrman’s face lights up when he talks about his favorite Russian operas — of which there seem to be dozens. Despite his apparent passion for Russian music and literature, he has not visited the country since the fall of the Soviet Union. He would like to go back to explore his roots, he said, visiting not only Moscow but more remote corners in Belarus, where part of his family is from.

Always optimistic, Lehrman even hopes one day to get his opera based on Chekhov’s “The Jubilee” staged in Russia. He insists the language would not be a problem: “I composed it to Chekhov’s original Russian text, then went back and wrote an English translation, so I have both versions.”