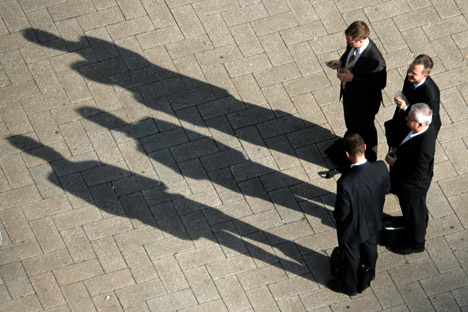 Some experts have doubts that Russia will be able to climb a few more places in the Doing Business ranking of 2013. Source: Reuters / Vostock Photo

In the past 12 months, the Russian authorities have managed to reanimate the political system and bring the country up eight notches in the Doing Business ranking. Yet, experts have concerns that the positive trend might reverse next year.

The political crisis of 2012 has remained front and center for months. However, economists have recently joined political experts in voicing their concerns about the new challenges that the Russian economy will face and ways for the country to respond to them. 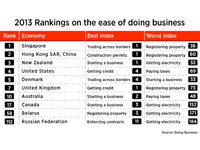 According to the Levada Center, more than half of Russians believe that the country needs reforms, and that the authorities led by President Vladimir Putin fail to introduce them properly. The Levada Center is known primarily as an opposition think tank, but reports by the Center for Strategic Research (CSR), which is loyal to the incumbents, are even more pessimistic, with up to 66 percent of Russians said to be disappointed with the authorities.

The drop in Putin’s approval rating does not make the opposition any stronger, though. CSR specialists draw the following conclusion: New mass protests are very likely in Russia, and there is even a chance of a revolution.

While experts continue to argue over whether some “Navalny” or any other opposition leader might be able to compete with Putin, economists are clearly more concerned about Russia’s first year as a World Trade Organization member.

TheFinancial Times shares a pessimistic scenario: The newspaper believes that the investment climate will gradually deteriorate in Russia. Only 15 percent of the experts polled by the newspaper in late November called the official economic policy favorable for doing business in Russia.

Besides subjective opinions, there are objective figures: During the last 12 months, Russia has climbed eight positions to number 112 in the Doing Business ranking.

The main achievements have been the reduction of the administrative burdens on businesses and the easing of procedures for paying taxes. When it comes to the Paying Taxes indicator, Russia has moved up 41 notches to rank 64. The main problems that businesses encounter in Russia are dealing with construction permits and receiving electricity.

Other important factors are the thematic rankings, in which Russia has substantial untapped potential, according to Andrei Nikitin, general director of the Agency for Strategic Initiatives.

“The main focus areas for us today are the construction of energy facilities, import and export. But it is in those areas where we need to have a breakthrough that we lag behind so miserably,” Nikitin said.

Customs clearance has traditionally been a central problem for the focus areas. The year 2013 may become a point of no return for Russia. In June 2012, the government approved a roadmap for improving customs administration, and 2013 will show how well these improvement plans are implemented.

The program aims at a 60 percent reduction in the number of documents required to export commodities from Russia, whereas the timeframe to draw up the necessary documents is supposed to decrease from 25 days to seven. Furthermore, specialists hope that the customs system will benefit from the Customs Union framework – cargo delivery periods have been significantly reduced since customs control was canceled on the borders of Russia, Kazakhstan and Belarus.

However, some experts have doubts that everything will go smoothly and that Russia will be able to climb a few more places in the Doing Business ranking of 2013.

“Russia had paved the way for making this breakthrough in 2013,” said Timofei Shatskikh of RosBusinessConsulting. “But we need to understand that the international market doesn’t have much sympathy for mistakes. Everyone is moving toward integration, and it is imperative for Russia not only to move forward, but also to move faster than everybody else.”

Nikitin shares this view: “Construction is the most indicative example. We have made progress in many areas here, but the rank remained unchanged ‒ which means that someone was moving faster than we were.”

In any event, amid the ongoing crisis in the eurozone, Russia seems to have a fair chance of making yet another breakthrough.