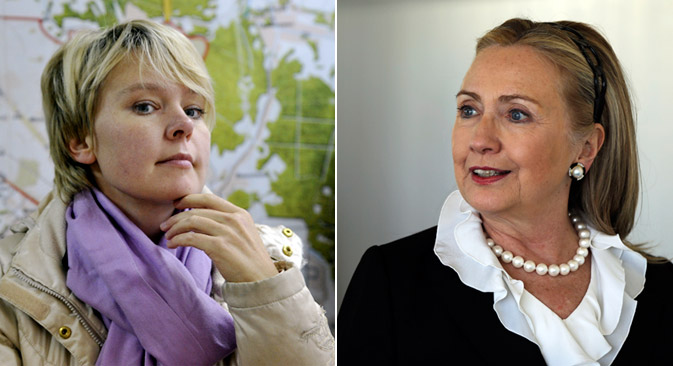 The outgoing Secretary of State, who was selected as one of the magazine’s 100 Top Global Thinkers for the fourth year running, spoke in a keynote speech about many challenges, from peace in the Middle East to China’s rise as a global power, before honing in on Russia.

“We have made some progress with Moscow on areas such as nuclear arms reduction, sanctions on Iran, and trade. And we continue to seek new issues where we can cooperate together,” Hillary Clinton said. “But the reality is we have serious and continuing differences with Russia – on Syria, missile defense, NATO enlargement, human rights, and other issues. So we have to take a smart and balanced approach going forward. We need to continue expanding our engagement with Russia, but with very clear eyes about where we draw our lines.”

As she left the podium, Clinton hugged and said hello to longtime colleagues in the audience.

Russian environmentalist Evgeniya Chirikova, also selected by Foreign Policy as one of the top 100 Global Thinkers, was also in attendance and walked up to Clinton.

“I handed Hillary Clinton a petition… and she looked at me and said, ‘Keep going,’” Chirikova said later at a reception at the Hirshhorn Museum and Sculpture Garden. “It felt great,” she said. The reception featured the artwork of controversial Chinese artist Ai Weiwei, who was placed 26th on the Global Thinkers list.

Chirikova is the charismatic leader of the environmental movement to preserve the Khimki Forest from destruction from a highway from Moscow to St. Petersburg. Local residents have actively protested against the project. Tensions between residents, construction workers and security personnel have been high at different points over the past two years. Two activist editors of local newspapers were severely beaten during escalating tension and violence.

In a nod to the one-year anniversary of the current opposition movement, Foreign Policy magazine included six Russians in its annual list of 100 Top Global Thinkers of 2012.

The three members of Pussy Riot who went on trial this year for their ‘Punk Prayer” protest in a Moscow cathedral - Nadezhda Tolokonnikova, Maria Alyokhina and Yekaterina Samutsevich - were placed joint 16th on the list, just nine places below Hillary Clinton and her husband, former President U.S. Bill Clinton at joint 7th. Cybersecurity star Eugene Kaspersky (placed 40th),  anti-corruption activist Alexei Navalny (45th) and environmentalist Chirikova (70th) were all included on the prestigious list, which was headed by Burmese politician Aung Yan Suu Kyi, as well as such western establishment leaders as billionaire George Soros and IMF chief Christine Lagarde.

What criteria were used to select the “Top 100 Global Thinkers”?

In a lighthearted essay, Foreign Policy CEO and editor-at-large David Rothkopf wrote, “Once again, Foreign Policy has with characteristic humility compiled its list of leading Global Thinkers. How we could possibly identify the top 100 thinkers on a planet of 7 billion people when we've never met a fairly considerable number of those people is not something we dwell on when discussing our methodology. Suffice it to say, the list is impressionistic. (OK, it's more than a little ridiculous. But this is a tradition, so let's just keep that between us, shall we?)”

The Transformational Trends conference, developed with the assistance of the U.S. State Department, was studded with the elites of policymaking. The daylong event offered a forum to discuss dramatic trends of the past year, from the Arab Spring to shale gas to resource nationalism. Panelists included National Security Adviser Tom Donilon; deputy Secretary of State Bill Burns, a former Ambassador to Russia; Carlos Pascual, U.S. State Department’s Special Envoy and Coordinator for International Energy Affairs; and Sabastian Thrun, vice president at Google, who was on the Global Thinkers list.

During the conference, a panel of former National Security Advisers fielded a question from “Russia Beyond the Headlines” about U.S. President Barack Obama’s reset with Russia. Earlier this year, Obama was caught in an “open mike” moment telling Prime Minister Dmitry Medvedev that he would be freer to pursue bilateral initiatives after the U.S. presidential election in November.

Sandy Berger, a former National Security Advisor under Bill Clinton, said it was important to distinguish some statements from Russia’s leaders from their “real posture.”

“U.S.-Russia relations are not moribund, but there are some sore spots, including human rights and NGOs,” Berger said. “We’ll do business with President Putin.”

And debate moderator Susan Glasser, editor in chief of Foreign Policy magazine, said there was a “nuanced view” in Washington about US-Russian relations, particularly over comments by defeated U.S. presidential candidate Mitt Romney that Russia was America’s “No. 1 geopolitical foe.”