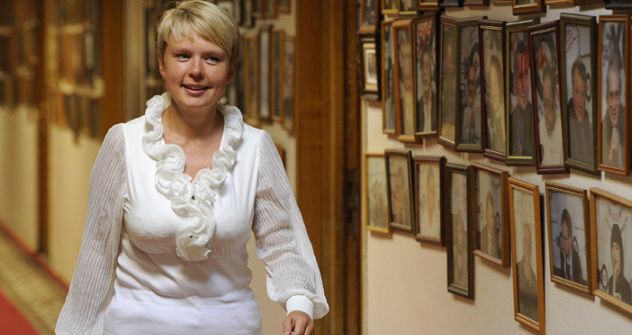 Evgeniya Chirikova, leader of the "Save Khimki Forrest" environmental movement, has announced plans to run for mayor.. Source: ITAR-TASS.

The second largest city in the Moscow Region is about to become the stage for this fall’s biggest political confrontation.

Mayoral elections in the Moscow suburb of Khimki have every chance to become the biggest political event of this fall. Once a closed city devoted to science, in the past 10 years Khimki has found itself at the center of many high-profile political dramas. Today representatives of every major political force in the country are vying to lead the city.

Evgeniya Chirikova (35, married, two daughters) is a Russian public activist, leader of the Environmental Defense of the Moscow Region movement and the Movement for Protection of the Khimki Forest. She won notoriety by her actions during the construction of the Moscow—St. Petersburg highway. An active member of the opposition movement For Fair Elections, she has been repeatedly detained by the police for organization and participation in unauthorized meetings and protests.

In her own words: “I never intended to engage in politics. Officials paint me as an opposition leader. But in fact I’ve simply become a citizen. At the age of 30.”

Official nomination of candidates for mayor will only begin on Aug. 24, but the primary candidates are already known, and the expert community is actively discussing their prospects. Evgeniya Chirikova, leader of the environmental movement to preserve the Khimki forest and an associate of opposition leader Alexei Navalny has announced her intention to run for the office. Her primary competitor will be Oleg Mitvol, the head of the Russian Federal Service for Environmental Oversight, best known for the “dacha wars” against illegal cottage settlements. Russia’s major political parties have not announced candidates yet, but they have all indicated that they will do so.

During the Soviet era, the majority of Khimki residents were employed in closed enterprises related to scientific development, but after the fall of the Soviet Union, the city’s location attracted retail and housing developments. The reason is clear. Khimki is located on the M10 highway, which connects Moscow and St. Petersburg and provides connection to Sheremetyevo airport. But developing retail space in 1990s Russia was often a slightly shady operation, and the Russian press has accused former Khimki mayor Vladimir Strelchenko of taking bribes. In 2004, the opening ceremony for the MEGA Mall in Khimki was disrupted, and the head of IKEA Russia Lennart Dahlgren, whose store anchors the mall, has claimed that the city government has been soliciting bribes from the company.

"We hugged the trees to stop the bulldozers"

Strelchenko was also mayor during the high-profile scandal surrounding the construction of a new Moscow—St. Petersburg highway. Khimki residents actively protested against the project, which involved cutting down a swath of the Khimki forest. In summer 2010, a tent camp was pitched in the forest, providing a flash point for tensions between local protestors, construction workers and security personnel. The conflict reached its height in July 2010 when, after yet another attack on the tent camp, anarchists of the Antifa movement attacked the Khimki government building with smoke grenades and stones.

Khimki is also a less-than-safe location for journalists. In 2006, two editors of the Grazhdansky Forum newspaper were beaten severely; the newspaper was later closed. The editor-in-chief of the local newspaper Grazhdanskoye Soglasie, renowned for its pro-environmental publications, also survived several attacks. The most publicized of these incidents, however,was the beating of the editor-in-chief of Khimkinskaya Pravda, Mikhail Beketov, who also opposed the destruction of the Khimki forest. He was permanently disabled by his attack.

The fight for the Khimki forest is what brought Evgeniya Chirikova to the political stage.

Chirikova nominated herself as a candidate from the wooden stage in the Khimki forest where she was meeting activists from her movement Environmental Defense of the Moscow Region.

Oleg Mitvol (45, married, one daughter) is a Russian public activist, chairman of the Central Board of the environmental political party Green Alliance-Popular Party, former prefect of the Northern Administrative District of Moscow and head of the Federal Agency for Oversight of Environmental Resources. Mitvol’s politics have been a frequent topic in the Russian press and journalists have implied that although he now paints himself as a member of the opposition, he actually approves of current policy.

In his own words: “When I was doing business, I used to go to casinos. But now [after joining the state service] I’m surprised to admit that I don’t even want to go there. I get enough adrenaline here.”

Alexei Navalny wrote about Chirikova: “Without any political party or patronage, she has managed to form a true popular environmental movement, proven to be an efficient political figure and organizer by pushing the Khimki forest agenda on the whole country, and succeeded in displacement of the former mayor Strelchenko.”

Other opposition activists have also expressed their support of Chirikova, among them Just Russia party Duma Deputy Dmitry Gudkov. “Chirikova is not just an environmentalist, she has grown to the level of a federal-level political figure,” Gudkov said.

At the same time, many people have questioned Chirikova’s ability to make the leap from an environmentalist to mayor. Chirikova’s situation is also affected by the experience of other cities where famous opposition bloggers and activists have failed to produce experienced politicians and managers. “The elections in Krasnoyarsk and Omsk have shown that voters choose on the basis of business, and not ideological qualities of candidates,” said Mikhail Remizov, president of the National Strategy Institute Mikhail Remizov. Additionally, Chirikova’s has already run for mayor of Khimki once and been defeated – in the 2009 mayoral elections, she took only 15 percent of the vote, coming in third.

One of Chirikova’s trump cards, however, is that her drive to protect the forest united the population of Khimki. It remains to be seen whether this will be enough to allow Chirikova to defeat experienced manager Oleg Mitvol who has already stated that Khimki has some “much more pressing matters than the environment.”