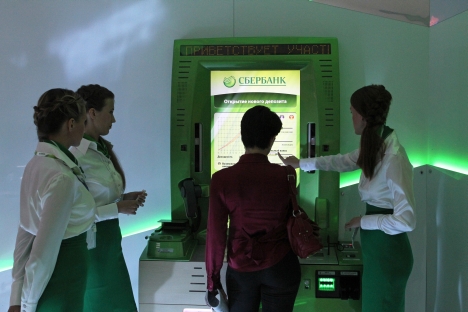 Russian bonds are hot, but with yields falling some analysts are asking if a bubble hasn’t emerged.

The Russian government has also been cashing in on the enthusiasm for emerging-market fixed income instruments, while several state-backed companies have issued bonds to raise money in order to restructure.

Russia’s international bond issuance has been on fire this year, as issuers seek cheaper borrowing on dollar-based rates in global bond markets rather than relying on expensive loans back home. Russia is on course to issue a record number of bonds: By September, Russian borrowers had issued $28.6 billion of bonds, second in the world only to Brazil’s $34.4 billion of new debt. The total volume of new Russian Eurobond issuance in 2012 might come in at $40 billion, against a total of $250 billion of emerging-market issuance, according to JP Morgan’s estimates.

Among those taking advantage of the cheap borrowing costs was the state-owned, pan-regional development bank Eurasian Development Bank (EDB), which placed $500 million worth of 10-year Eurobonds in September at a yield of 4.767 percent - almost half of its previous issue three years earlier and less than Russia’s bluest blue-chip retail giant Sberbank’s 5 percent for a $750m Eurobond issued in July.

“The markets are hot this year, with Eurobond issuance out of Russia for the first 10 months at approximately twice that of all of last year, and already at the 2010 level,” says Dmitry Krasilnikov, a member of EDB’s board of directors, who organized the bond placement.

And the banks keep coming up with new types of paper to appeal to investors. At the end of November, Russian investment bank VTB Capital issued Russia’s first ever gold-linked bond with a maturity of one year and a variable yield capped at 20 percent, priced in rubles.

“Investors’ profits will come from rising gold prices and will be paid as a variable coupon at the end. In the event that the price of gold falls, clients’ initial investments will be returned fully, plus a fixed coupon of 0.1 percent per annum,” says VTB in a statement.

The gold bond follows on from VTB’s $1 billion perpetual bond issue in September, which the bank used to bolster its capital. State-owned Gazprombank issued an identical $1 billion bond only a few weeks later. Indeed, with capital being squeezed by a boom in consumer lending, which rose 43 percent in the first 10 months of this year, Russian banks make up the lion’s share of the issues.

Overall, Russia printed some $8.2 billion in new deals in October alone, of which almost $6.5 billion came out of the financial sector. Moreover, almost $5.8 billion of these banking sector issues was used to shore up bank’s capital.

“Many Russian banks and corporates are an attractive bet for international institutional investors, who are seeking yield pick-up for their portfolios on the back of the monetary easing by key central banks,” says Krasilnikov.

However, some analysts warn that the bond rally is now nearing its peak, because yields in some classes of emerging-market bonds are now at historical lows, driven down by returns-hungry investors.

“The bond market has been a stellar performer this year, but yields can’t keep falling for ever,” says Roland Nash, CIO of Verno Capital. “Either the volume of issuances will slow next year, or else investors will start switching out of bonds into other assets, such asequities, that offer better returns.”