US pharmaceutical giant ready to invest $500 million in Russia 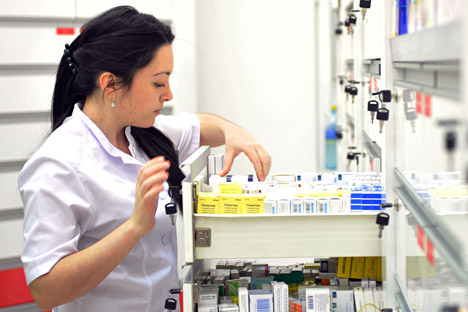 Abbott Laboratories is set to pay $280 million for Russia’s NPO Pevtrovax Pharm. In total, the U.S. giant is prepared to invest half a billion dollars in the company.

Petrovax Pharm was established by Russian influenza vaccine researchers Rem Petrov, Arkady Nekrasov, Natalia Puchkova and Rakhim Khaitov. The company’s current director, Professor Arkady Nekrasov, was awarded a State Prize in 2002 for the development of medicines that now make up the core of the company's portfolio: Grippol (an influenza vaccine) and Polyoxidonium (an immunomodulator).

In 2011, the analytical company Pharmexpert estimated Petrovax Pharm’s turnover to be at $98 million, ranking it 12th among domestic pharmaceutical producers. In 2008, the European Bank for Reconstruction and Development (EBRD) acquired a minority stake in the company.

The prospective buyer, Abbott Laboratories, is currently 9th among the world’s largest pharmaceutical companies, boasting a $22.4 billion turnover in 2011. Its total sales revenue reached $38 billion, which incorporates the results of its medical equipment divisions. The company employs over 90,000 people.

According to Abbott Laboratories’ business plan, the project involving the acquisition of Petrovax Pharm is expected to require up to $500 million in investment, including the cost of the transaction. In addition to the target price of $280 million, the total amount factors in additional compensation to the company’s current owners: the EBRD, Arkady Nekrasov and Natalia Puchkova. They will receive 5 percent of the total sales of products developed for the next three years.

Abbott does not expect this to exceed $10 million. Moreover, they are planning two compensation installments: $13 million one year after the deal is closed and another $2 million the year after that. The total investment to acquire the shares and integrate the company into Abbott's global structure (including retraining personnel) may reach $400 million, according to Abbott’s estimates.

Furthermore, the proposed expansion of production at Petrovax facilities (which involves putting two more production lines in place) and the upgrading of existing lines to fully match international and corporate standards, as well as registration of new medicines and costs of marketing, are likely to push the figure to $500 million.

“The total transaction value does not only reflect the acquisition of production facilities of NPO Petrovax Pharm,” said Nikolai Bespalov, director of research and consulting at Pharmexpert. The price also factors in the cost of intellectual property: brands and projects under development, which Abbott could use to create new medical products and promote them globally.

Probusinessbank analyst Geldy Soyunov believes that the interest of major pharmaceuticals players in developing markets has been spurred by the fact that the latter often boast high growth rates of medicine consumption.

The article is abridged and first published in Russian in the Izvestia newspaper.