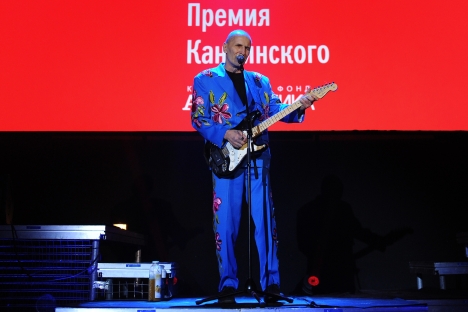 The Kandinsky Prize for “Project of the Year” was shared this year by Russian-American artist Grisha Bruskin and Russia's famous art group AES+F. Dmitry Venkov, meanwhile, was named the best young artist of the year.

The Vassily Kandinsky Prize, founded in 2007 as an independent award for contemporary art, announced its annual awards this week. A total of 385 works were submitted for the main prize. An international jury drew up a long list of candidates whose work formed the basis of the Kandinsky Prize Exhibition.

This was then reduced to a shortlist of three works in each award category. As of this year, there are only two categories, since “Media Art Project of the Year” is no longer being awarded. The nominees for the main prize of “Project of the Year” were Aladdin Garunov for his “Total Prayer” installation, Grisha Bruskin for his “H-HOUR”sculpture project and the AES+F team for the “Allegoria Sacra” multichannel video installation. The nominations in the “Young Artist Project of the Year” category were Maria Safronova, Dmitry Venkov and the ZIP group.

The venue for both the award ceremony and the exhibition was Udarnik, formerly a cinema in the center of Moscow. It was the first time that Udarnik hosted the event. The cinema is scheduled for major reconstruction, after which it will become a private gallery of contemporary art.

The Soviet-era cinema seating had long since been stripped out of the cinema hall, but it was easy to put out the chairs along a similar pattern. The surviving cinema screen was put to use to display video clips of the nominees’ work, as well as to show some extremely long-winded material from the archives of Marxist cultural theoretician Mikhail Lifshitz, who is currently undergoing an inexplicable revival in popularity.

The gaps between the musical numbers were filled with an ironic lecture on art by Alexander Melamid, one of the founders of Sots Art, and a demonstration of multimedia video about the history of the Udarnik Cinema. The entire ceremony was kept to a reasonable length, running for 90 minutes.

The most exciting part of the ceremony was the standoff for the 2012 Kandinsky Prize between Russian American prominent artist Grisha Bruskin and the famous art group, AES+F.

It turned out to be just too close to call, and, for the first time in the event’s six-year history, the award was awarded to two contenders.

“They are two great utopias, and making comparisons or choices between the two is just impossible,” said Olga Sviblova, director of the Multimedia Art Museum, said when awarding the prize.

The outcome was entirely unexpected. Since only one copy of the prize statuette had been made, the winners had to take turns holding it.

Later on, the organizers of the event promised to make a replica of the award. They will need to make not two but five statuettes altogether, since the AES+F group includes Tatiana Arzamasova, Lev Evzovich, Evgeny Svyatsky and Vladimir Fridkes.

In his acceptance speech, Bruskin could not ignore the image of the enemy, which is central to his “H-HOUR”sculpture installation. Lev Evzovich, on behalf of AES+F, thanked the jury for the “wisdom of Solomon,” not missing the chance for irony: “We’ve already got used to being the most experienced losers on the contemporary art scene.”

Both winning projects are well-known to insiders in the contemporary art world. The “H-HOUR”sculpture installation was shown recently at the Multimedia Art Museum – the same venue which staged the premiere of “Allegoria Sacra,” the last section of a large-scale multimedia trilogy. The entire trilogy could be seen this autumn at the group’s exhibition in the Moscow Manege.

Named after the painting of the same name by the prominent Italian artist Giovanni Bellini, the video installation “Allegoria Sacra” presents an open allusion to its Florentine namesake in the Uffizi Museum.

Many experts believe that the painting, which so powerfully grasped the imaginations of the AES+F group, shows Purgatory along the banks of the River Styx, where the souls of the dead await the decision of the “highest court” on their fate. Consequently, the new “Allegoria” is the self-same Purgatory, but brought to life by contemporary technology.

The multi-figure “H-HOUR”installation by Grisha Bruskin is made up of dozens of sculptures, without any specific reference to period or geographic location. Its creator explores the myth of the enemy in all its multifaceted guises, immersing the viewer in the atmosphere of an alien world, where a state of emergency is in force.

“The starting point for this piece was Soviet posters about civil defense, which surrounded people in every public place when I was a kid," Bruskin said, as quoted on the Multimedia Art Museum website. "On the posters were images of hypothetical life situations a person – a Soviet citizen – might have to live through when the ‘H-Hour’ arrives. It means, when the enemy – the Americans or the Germans – attacked us."

"The set of instructions in the pictures were like general orders, Biblical commandments," he added. "These pictures made a strong impression on me when I was young. I imagined myself in that mad Kafkaesque world whose rules weren’t accessible to me, or whose rules I’d not memorized for homework. Every act in this unlearned space violated unknown rules and punished me. I was supposed to have a continuous feeling of inescapable guilt. It was a situation, just like in Franz Kafka, which became my fate, my destiny – something inevitable.”

In the second award category (“Young Artist Project of the Year”), there were three finalists: Maria Safronova, the Krasnodar art group ZIP, and Dmitry Venkov. The award went to Venkov for his “Mad Mimes” – a kind of mockumentary filmed as though researching a non-existent collective that collects rubbish on the Moscow Ring Road.

The is story is combined report based on materials from Rossiyskaya Gazeta and Gazeta.ru.