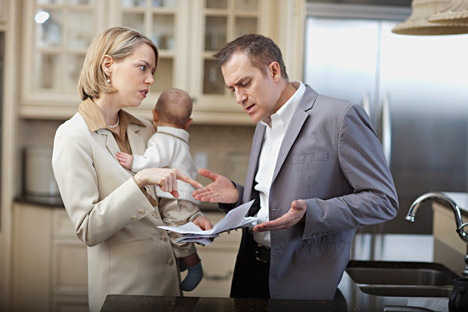 Who ends up in the role of household “finance minister” in Russian families depends on a number of important factors. Source: Getty Images / Fotobank

Big changes have taken place in the attitudes of Russian families toward finances over the last 15-20 years. Equal control of family budgets by both spouses has been gradually shifting in favor of control by one partner or the other. Who ends up in the role of household “finance minister” depends on a number of important factors.

According to a recent Higher School of Economics study based on monitoring financial behavior and confidence in financial institutions, women are more or less in charge of finances in most Russian families.

Russia keeps calm despite the crisis

Joint management of a family budget, in most cases, means that the husband not only brings his entire paycheck home, but he also delegates the right to decide how to spend it to his wife. This is because, traditionally, it is the wife who is responsible for running the household’s economy, including housekeeping and providing the family with everything it needs.

This kind of allocation of responsibility did not emerge yesterday. The Russian writer Alexander Pushkin described the typical Russian family of a fort commandant and his spouse in his novel, “The Captain’s Daughter”:

“His wife led him completely, which, by the way, suited his natural laziness very well. It was Vasilisa Yegorovna who directed all military business as she did that of her household, and commanded in the little fort as she did in her house.”

When British researchers conducted studies into who managed finances in Russian families in the mid-1990s, 80 percent of the respondents said they did it together. Fifteen years later, the result has changed substantially: 45.6 percent said their family budget was managed jointly, 25 percent said the woman of the house was in charge, and 23 percent gave the control to the husband.

The transition from a “democracy” to a “dictatorship” by either husband or wife has a simple explanation: the income level of Russian families has changed dramatically.

According to Dilyara Ibragimova, lecturer in economic sociology at the Higher School of Economics and author of a new study on the management of household income in Russian families, a system characteristic of most Soviet families where both spouses worked for approximately equal pay was still dominant in the 1990s. However, financial equality had become history by the 2000s.

Not only had incomes of men and women evolved, but their work statuses had too. Full-time housewives are no longer as exotic as they used to be in Soviet times, and stay-at-home husbands of well-to-do business ladies have long since become a common sight.

Handling the financial flows has changed accordingly. It is normally the wife who distributes money in poorer families. In affluent families, however, the husband is more likely to control the budget.

“The choice between finance management systems depends on the family’s survival strategy: in families that prefer to cut spending, women tend to be responsible for money matters, because they are better at saving. If another strategy – such as looking for better-paying jobs and additional revenues – has the priority, then the husband will definitely be in charge,” Ibragimova said.

If both spouses have a higher education, they are most likely to manage their finances on an equal basis. However, this is true only for couples where both spouses work. Even if a housewife has a number of degrees, she will still, most likely, have to ask her “finance minister” spouse for spending money and sometimes even submit written expense reports for his approval.

The British sociologists whom Ibragimova cites in her research have also revealed that joint financial management does not always mean that a husband and a wife have equal voting rights when it comes to spending money. Even if all money is put into a single pot, the last word will usually fall to one of them.

In some Russian families, the husband may be considered the financial boss only nominally. A wise woman will never admit that she is the real breadwinner, so as not to hurt her husband’s self-esteem. Moscow State University professor Anna Pavlovskaya, who has spent years researching Russian customs and the Russian national character, believes that even a successful, high-earning wife will try to emphasize her position as a dependent when talking to her husband.

“If she doesn’t play this game, not only does she stand a fairly good chance of losing her husband, but also, more importantly, she runs the risk of boredom. A family woman still likes to feel like a woman – weak and needing to be cared for. Even if she is a big and decisive boss,” said Pavlovskaya.

There are also families in Russia where, in addition to having separate incomes, spouses also get to spend separately. Such families account for 4 percent of the total. But the separate spending model is unlikely to become dominant any time soon. According to opinion polls, far fewer couples are satisfied with such a strategy than those who manage their spending together.