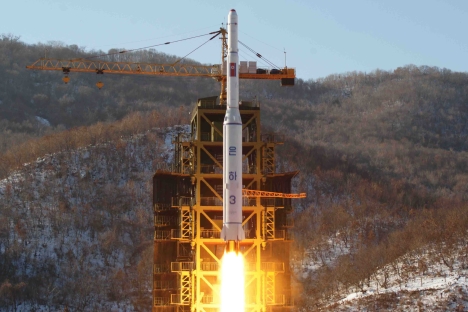 North Korea's latest launch of a ballistic multi-stage rocket indicates that the country has been flexing its muscles. Source: AP

North Korea appears to have achieved what it set out to do: a Korean-produced satellite recently appeared in near space, after being launched into orbit by a Korean vehicle. Can Pyongyang now consider itself the capital of a state with strategic nuclear capabilities? What kind of statement did the North Koreans want to make with this move? And what have they actually acquired, from a military and technological point of view?

The latest launch of a ballistic multi-stage rocket in North Korea was not the first.

“This launch won’t be any more destabilizing than all the previous ones,” said Alexander Khramchikhin, head of the Analytics Department at the Institute for Political and Military Analysis. “Launching rockets is Pyongyang’s equivalent of an export product. North Korea is using these launches to blackmail the international community (first and foremost the U.S.), in order to receive humanitarian aid.”

North Korea has been flexing its muscles for some decades now, trying to use the threat of armed conflict to scare the world into submission. The inevitable collapse of its “powerful” benefactor – the Soviet Union – at the end of the 1980s put Pyongyang in a serious fix. What would they live on now? Soon after this, North Korea announced its intention to implement intensive plans to produce nuclear armaments using facilities that had nothing to do with the military.

America’s initial reaction was one of outrage – and then of fear. As a result, the so-called Vienna Framework Agreement was signed in 1994, which preceded the creation of the Korean Peninsula Energy Development Organization (KEDO). Fuel was sent to the country, and the global community combined forces to start work on the construction of a nuclear power plant (NPP).

In August 1998, North Korea successfully launched a tactical ballistic missile, which managed to fly over Japanese territory. The West was up in arms again, having attained reliable information about Pyongyang’s secret uranium enrichment program. Having replaced Bill Clinton in the White House, George W. Bush named North Korea a “rogue state.” This was the start of the current North Korean nuclear crisis.

In 2006, the North Koreans held their first nuclear tests. In February 2007, at yet another round of the Six-Party Talks in Beijing, they suddenly tried to bargain for 500,000 tons of heavy fuel oil or the equivalent amount of energy assistance.

In return, North Korea proposed to dismantle its nuclear center in Yongbyon (where weapons-grade plutonium was developed during the nuclear crisis) and to present the countries participating in the negotiations with a full list of all its nuclear facilities that were going to be destroyed. However, Seoul threatened to cease cooperation with Pyongyang if there was no further progress in the nuclear sphere.

The “irreconcilable” George W. Bush himself, pleased that his presidency was ending successfully, convinced South Korea to be more restrained in their reaction. Pyongyang had been promised that, if North Korea performed all the conditions of the February 2007 agreement (i.e., continue to dismantle nuclear facilities and present full lists of them to the international community), it would again be eligible to receive humanitarian aid.

As well as this, the U.S. would wipe North Korea from its list of countries supporting terrorism, lift sanctions, and even resume diplomatic relations.

At the end of June 2008, the Chinese Mission was presented with a list of North Korea’s nuclear facilities, and this was then circulated between participants in the Six-Party Talks. In July 2008, the six-party negotiations were resumed in Beijing. In May 2010, Pyongyang set off a second nuclear explosion as a way of confirming its success and raising a toast to its further development.

Can we think of North Korea as a nuclear power after its latest successful launch? We can, but only in theory.

North Korea may have accumulated reserves of fissionable material, but this is not enough to make weapons on its own. The weapons need to be charged and thoroughly tested to make sure they are serviceable – to gauge their actual power and to integrate them into a technologically advanced, highly complex, ready-to-use, nuclear weapons system.

A single successful launch of a multi-stage vehicle and placing the object into space says nothing about the country’s actual nuclear capabilities.

The experience of the Soviet Union at the end of the 1950s (which, even then, was much more than North Korea has accumulated by 2012) is testament to this. The famous, first man-made satellite is actually just a side effect of a Soviet nuclear-missile program that was put on the back burner.

On August 21, 1957, having covered 3,479 miles, the weight-accurate dummy of a P-7 missile warhead, developed by the leader of the Soviet military space program, Sergei Korolev, successfully reached the designated landing site on Kamchatka. However, despite the triumphant stories published in the Soviet press, the creators of the new weapon were well aware that there was still a long way to go before this prototype missile would be ready to use.

First of all, the launch took far too long to prepare – 10 days in total. Just refueling the rocket required a whole 12 hours. As well as this, the flight program itself was still unsatisfactory. In particular, it became clear that the warhead with an imitation nuclear charge never made it back down to Earth and always burned up in the dense layers of the atmosphere.

Korolev could see that this problem would take a long time to solve; so the Board of Chief Engineers decided to divert the attention of top Soviet government officials, who were demanding the missiles be turned into weapons right away. They suggested the government instead concentrate its hopes on rocket launches that were unconnected with the summer tests for the armament preparation program. Thus, the state decided to fire on all cylinders to realize the idea of launching a man-made satellite to orbit the Earth.

Leonid Ivashov, president of the Academy of Geopolitical Problems, thinks the hype surrounding North Korea’s rocket launch is exaggerated, since the rocket does not pose a threat to international security.

“This reaction at the launch of a Korean rocket seems over-the-top to me. Someone evidently feels the need to whip up agitation in a world that is full of tension as it is,” said Ivashov.

For now there is no real threat. But Pyongyang is not one to give up…