For business, a year of growth and change 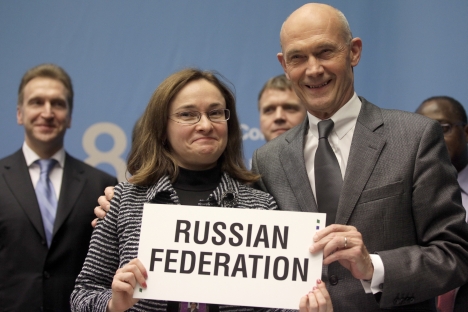 One of the economic highlights of 2012 for Russia was its accession to the World Trade Organization. Source: Reuters / Vostock Photo

The Russian economy marked three major events in 2012 — accession to the W.T.O., the end of TNK-BP and the country’s first APEC presidency.

Russia spent all of 2012 waiting for a crisis that never came. Though the economy cannot be said to be in ideal shape, Russia’s GDP for the period from January–October 2012 grew 3.7 percent compared with the same period last year; industrial output has increased by 2.8 percent year on year; investments in basic assets are outstripping forecasts at more than 9 percent; and unemployment continues to fall.

Today, Russia’s unemployment level stands at about 5.3 percent, roughly 4 million people, according to estimates from the International Labor Organization. In October 2011, the unemployment rate was 6.4 percent.

Welcome to the club

One of the economic highlights of 2012 for Russia was its accession to the World Trade Organization. It took Russia 18 years to become a member of the world’s main trade body. Agreements on the majority of issues were reached fairly quickly, but three major categories  stalled the process for years: the automobile industry, agriculture and agricultural machinery.

For a long time, Russia refused to cut duties on the import of automobiles, arguing that domestic producers could not compete against international giants. Eventually, an agreement was reached that cut the car import duty from 30 percent to 25 percent, and it will be cut further to 15 percent over the next seven years.

However, to make up for these lost taxes, the Russian government has introduced a disposal duty in its place. The idea behind this tax is that vehicles imported into Russia will sooner or later have to be disposed of at the Russian government’s expense and producers should pay for this. The strategy has already drawn criticism from the European Union, which claims that the duty  goes against WTO rules.

For agricultural machinery, duties have been cut from 15 percent to 10 percent (and for some categories to 5 percent). As regards agriculture, the approach is more differentiated, but overall Russia is cutting duties on nearly every kind of agricultural produce except for beef.

So far, the feared threat to domestic producers from WTO accession has not materialized. The customs service maintains that the cut in duties has not led to a spike in imports. According to the European Economic Commission, the amount of imported goods in September (the month following accession to the WTO) actually dropped compared with August.

The buyout by Rosneft of BP’s share in the TNK-BP company was the biggest M&A deal of the year.

The state-owned oil company offered $17.1 billion plus 12.86 percent of its shares at the market price of more than $10 billion in exchange for 50 percent of TNK-BP, making the total sum of the deal $27 billion.

For almost 10 years, TNK-BP was one of the most controversial companies in Russia. Set up in 2003 as a joint venture of the Tyumen Oil Company (TNK) and BP on the basis of parity, the divergent interest of the shareholders caused problems almost from the very beginning. Rosneft plans to buy out the Russian partners as well, finally putting an end to the saga.

In 2012, Russia took on the presidency of the Asia-Pacific Economic Cooperation organization (APEC) for the first time in its history. Russia chose four key topics for its APEC presidency: energy efficiency, the exchange of technologies, food security and logistics. All these issues were discussed at September’s APEC summit in the Pacific port city of Vladivostok, but logistics took center stage.

Russia hopes to use the Trans-Siberian Railway as the basis for constructing an alternative transport channel to the Suez Canal, and discussed this possibility at the summit. However, the main agreement reached by the leaders of Asia-Pacific economies was to develop the region in accordance with a communiqué signed in Vladivostok after the meeting recognizing that the priorities of the global economy are gradually shifting towards Asia.