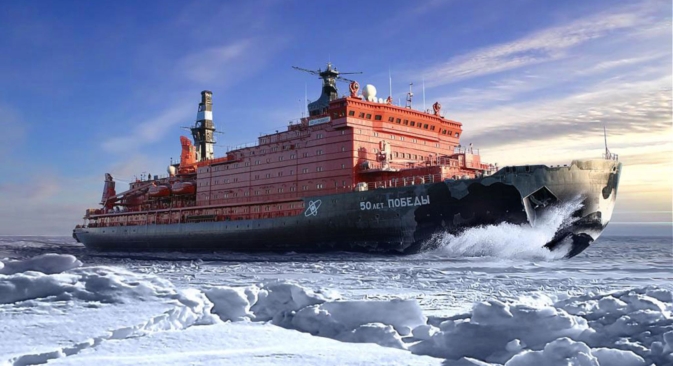 The warming of the Arctic region has opened up a new competition for resources, particularly oil, gas and rights to lucrative shipping channels.

The increased melting of the ices in the Arctic creates an opportunity for increased economic activity in the region, and the change has not gone unnoticed by regional players.

Between 2006 and 2009, the five countries that directly border the Arctic Ocean — Canada, Denmark, Norway, Russia and the United States — adopted national Arctic development strategies. The other three countries that have parts of their territories beyond the Arctic Circle — Sweden, Finland, and Iceland — soon followed suit. Today, even countries that are far from the Arctic, such as China and India, are increasingly active in that part of the world. 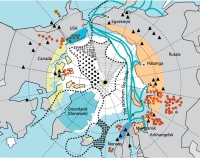 In December 2012, the Russian International Affairs Council (RIAC) presented its proposals for an international roadmap of Arctic cooperation.

According to Andrei Zagorsky, head of the Arctic project at RIAC, there are several main reasons for economic development of the region — energy first among them.

According to some estimates, 58 percent of the hydrocarbons located under the world’s oceans are located in the Arctic, and the growing demand for energy has brought global attention to the region. Major players in the oil and gas industry including Shell, Statoil, Total, Gazprom, Rosneft and BP have ambitious plans for the Arctic.

The melting of Arctic ice has also gradually opened cargo shipping routes across the Arctic between the Atlantic and Pacific oceans.

The Northern Sea Route goes along Russia’s northern cost and remains the shortest sea route between Asia and Europe, while the Northwest Passage is a route along the northern shore of North America. Russia’s Gazprom has already started using the North East Passage for exporting lique­fied natural gas (LNG) to Japan. PricewaterhouseCoopers (PwC) reports that the route may take up to 1 percent of the $1 trillion trade between the EU and Asia.

The law of the sea

The new accessibility of Arctic resources has raised the previously frozen issue of who owns the Arctic. The 1958 Convention on the Continental Shelf and the 1982 United Nations Convention on the Law of the Sea state that nations have the right to a territorial waters zone of 12 nautical miles and an exclusive economic zone of 200 nautical miles. In an exclusive economic zone, a country has sovereign rights for the purpose of exploring natural resources.

Nations can also claim their exclusive right for seabed resources exploration in a stretch of the seabed adjacent to their shores in a zone up to 350 nautical miles, if they prove that it is a continuation of the continent. Russia and Norway have already claimed their extended continental shelf in the Arctic region while Canada and Denmark are preparing to do so.

Although most of the natural resources are located in undisputable exclusive economic zones and continental shelves, some may still be located in the open sea and available for exploration by other countries.

Another issue that has a potential for disputes is jurisdiction over shipping routes. Both Russia and Canada claim their northern sea passages are historic routes that need to remain under national rather than international control. National control would not prevent vessels from other countries from using the passages, but they would have to inform national authorities in advance to get permission.

The lack of clarity over territorial and economic rights in the Arctic is part of what stimulates countries to be active in the region. In the Arctic Ocean nations, the adoption of Arctic strategies has been followed by other legal, symbolic, economic and security activities.

In 2007, Russian submersibles put a national flag on the seabed beneath the North Pole; Canada, Norway and Russia have announced the modernization of their military forces in the Arctic; and Denmark is also creating its own Arctic Command. Yet, said Zagorsky, “There is hardly any space for security competition in the region. All countries would get more from cooperation, and the challenging Arctic conditions are very conducive to it.”

Robert Blaauw, senior adviser for Shell’s Global Arctic Theme, talked to Kommersant correspondent Alexei Ivanov about development of the Arctic and his belief that the time to start is now.

Kommersant: Has the time really come to develop the Arctic’s resources? Can’t the global economy make do with resources available in the deposits that have already been developed?

Robert Blaauw.: According to Shell’s forecast, global demand for energy will double between 2000 and 2050. Renewable sources of energy, even if used on a larger scale, will only meet around 30 percent of demand, meaning that the world will still depend on the extraction of mineral energy resources.

The world’s population is growing, but the availability of resources is not. The U.S. Geological Survey announced in 2008 that the Arctic contains around 22 percent of the world’s undiscovered oil and gas reserves. A reasonable development of those could provide energy security for the world’s growing population.

Kommersant: Do technologies exist today that ensure safe oil production in the Arctic?

R.B.: Shell conducts its design and testing at the most advanced level based on forward-looking technology, including blowout preventers with dual shear rams and an emergency shutdown system.

On the one hand, this is a very cost-intensive environment, but on the other, it has enormous potential.

Since joining Shell in 1980, Blaauw has worked in roles in commercial and general management across the globe. In 2002, he moved to Shell’s headquarters, where he now manages the operational, technical, social and environmental challenges specific to the Arctic.

Drilling in the Arctic isn’t something new. It has been going on for decades. There’s a wealth of accumulated experience, and the industry is well aware of the risks involved in geological exploration. We are continuously improving technology to prevent oil spills, to reduce the environmental footprint of our facilities, and to increase work safety.

We are also actively developing technology driven by the specifics of Arctic operations. We know that open-water seismic work can be harmful to marine wildlife, especially commercially harvested species. That’s why we have implemented a set of measures to mitigate such risks. One such method is to conduct seismic work on ice, which allows seismic exploration to be done in wintertime rather than on open water.

{***Igor Chestin: Hydrocarbon production in the Arctic is hype by Ilya Arzumanov (Kommersant)***}

Igor Chestin: Hydrocarbon production in the Arctic is hype

Igor Chestin, director of WWF Russia, the Russian office of the World Wildlife Fund, talked to Kommersant correspondent Ilya Arzumanov about the expediency of developing offshore hydrocarbon resources in the Arctic.

Kommersant: Is it possible to extract natural resources safely in the Arctic?

Igor Chestin: It is possible in a number of regions that are not covered with ice for at least two warm months of the year. Production has long been underway in all ice-free Arctic shelf sections, primarily in the North Sea, which is the birthplace of all offshore production technologies.

Kommersant: How accurate are the data on the explored offshore reserves?

I.C.: It’s impossible to say so far if there are commercially viable hydrocarbon reserves there. Exploratory drilling is being planned all over the Arctic. A long-term offshore development program is being developed and exploration costs calculated. In any case, full-fledged development will take 15–20 years to begin.

Chestin graduated from the biology department of Moscow State University in 1985. He also studied environmental control at the University of Manchester. Chestin defended his Ph.D. in zoology in 1991. He has been with W.W.F. Russia since 1994.

Kommersant: The Arctic will probably become substantially warmer in those years. Will this help the development?

I.C.: The warming is unlikely to make the development easier — it will shorten the ice season in the Arctic rather than eliminate it.

Kommersant: What about Russian companies with offshore production technology?

I.C.: Russian companies have zero technology in the Arctic because they have no experience. Gazprom and Rosneft are planning to carry out exploration in partnership with foreign firms. But the problem remains. The technology for drilling in the Arctic is far from perfect, and there’s also a shortage of skilled labor. What’s more, not a single company in the world has the technology to eliminate potential oil spills under the ice.

Kommersant: Does it make sense to start developing the Arctic now?