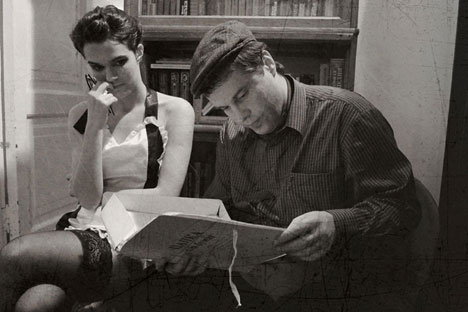 The Bulgakov cultural centre in Moscow not only preserves the memory of the great writer, but brings the characters of his novel to life.

Back in the Twenties, the lives of dozens of Soviet-era artists, musicians, poets and writers intertwined in a Moscow apartment block at 10 Bolshaya Sadovaya, the most famous of which was the then little-known writer Mikhail Bulgakov. The building, its inhabitants and the surrounding area were featured in Bulgakov’s The Master and Margarita, the quintessential Moscow novel that was published in 1966 – 26 years after the author’s death.

It was here in 1921 that Bulgakov, an immigrant from Kiev, moved into a small room on the fifth floor with his first wife Tatiana. This pokey room, with its blackened ceiling, must have seemed like paradise to the author, who had been camping out on friends’ sofas.

Other residents at 10 Bolshaya Sadovaya included the socialist revolutionary Fanny Kaplan (aka Feiga Roytblat) who lived there three years earlier when she made her assassination attempt on Lenin. Frequent visitors included poet Vladimir Mayakovsky, architect Fyodor Schechtel, operatic bass Fyodor Chaliapin and patron of the arts Savva Mamontov. The legendary dancer Isadora Duncan was said to have met her lover, the poet Sergei Yesenin, here, too.

A 20th-century masterpiece preserved for posterity

Bulgakov began writing The Master and Margarita in secret in 1928 in the darkest days of Stalin’s reign. When he died in 1940, aged 48, he was polishing off the fourth draft. The novel is set in Soviet Moscow, where God is dead but Satan and his demons are very much alive under the atheist regime. It’s also a novel within a novel as it moves to Jerusalem at the time of Pontius Pilate.

Said to be the greatest novel to have come out of the Soviet Union, the book is a parable on power and corruption; good and evil; and human frailty and the strength of love, moving from mystery and melodrama to satire and farce. When it was eventually published – posthumously in 1966 – it caused a literary sensation.

However, it was already popular with the Soviet intelligentsia as it was passed around in samizdat (unofficial) copies long before its official publication. Now the book is included in every list of best Russian books, and is part of the Russian school curriculum.The Mikhail Bulgakov Museum in Moscow, which is dedicated to the writer and his masterpiece, preserves the writer’s life and his work for posterity.

Some of the characters in Bulgakov’s writing were based on his neighbours. One was quarrelsome neighbour Anna Goryachyeva, a dyed-in-the-wool representative of the lumpenproletariat,who became the annoying Annushka in The Master and Margarita.

Today, 10 Bolshaya Sadovaya Street is a cultural educational centre dedicated to The Master and Margarita, comprising a museum, showing the house as it was in the author’s day; a theatre that stages performances of Bulgakov’s work; and a café.

On Saturday nights, characters from the book are brought back to life during evening theatrical excursions, which are held in English and Russian. The audience gathers at the museum where they are greeted by the tour guide, Svetlana. Everything in the room breathes literature: manuscripts; photographs; an old primus stove, the wooden chest on which Yesenin sat while he watched his Isadora dance.

Actors in character roam around, seemingly randomly,  transporting you back in time by slinking through the museum’s halls and emerging in strange places through secret doors. At the entrance, which leads to the Bulgakovs’ flat on the top floor, the group is set upon by a peculiar woman in a grey beret with a canister in her hand.

This is Annushka, and the canister contains the cooking oil that she spills on the train tracks, resulting in the death of Mikhail Berlioz – the Massolit literary asssociation chairman. “At this time of night most normal people are at home in bed,” she moans. As she scuttles off down the stairs, she bumps into Koroviev, the demonic jester in the check jacket. They run off downstairs screaming.

The tour group heads into the night to nearby Patriarch’s Ponds, which also feature in the novel. Bulgakov liked to walk here with his third wife and muse Yelena – the “Margarita” so passionately depicted in the novel. The lamplight illuminates a man with a walking stick who appears to be missing his head… the ghost of Berlioz. A woman’s shriek is heard. “They’ve killed Misha,” shouts a man in Soviet breeches.

“Our actor, Kostya, has been running round Patriarch’s Ponds every weekend for several years. We’ve had ambulances, and even the police turning up trying to save Misha. Even passers-by try to help,” says stage director Yekaterina Negrutsa.

Bulgakov’s lover Yelena reads his letters on Tverskoi Boulevard, while the naked Margarita walks past the walls of the Massolit house of writers. Soviet-era nurses in white aprons and armed with syringes emerge out of a gateway, looking for the escaped maniac poet Ivan Homeless. Instead, they grab the tour guide. The performance, it seems, develops an unscripted life of its own. 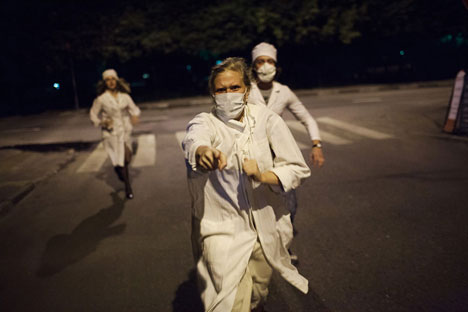 Out with the characters of Master and Margarita. Source: Alexei Smirnof.

“The excursions are mainly aimed at a younger audience,” explains Ms Negrutsa. “Lots of young people read Bulgakov, but a traditional museum about his work wouldn’t meet their expectations. We aim to surprise them, so that they’ll love his work the way we love it.”

The excursions vary, as different characters are used on different nights. The actor who plays Misha is a drama student at the Shepkinsky Drama School. He explains: “The first time they asked me to perform in staged excursions, I was a bit sceptical…well, it’s not real theatre, there’s no stage, no lights. And you don’t get to bow at the end – which is very important for an actor.

“But when I got into it, I found that it’s something completely new; it’s not exactly theatre, nor is it slapstick, but a genuinely high form of art – on the city streets. I love doing the excursions now… although I still wish that there was a bow at the end.”

The sound of clarinet and cello are heard coming along the street heralding the end of the excursion. The plodding of approaching footsteps provokes the imagination – it’s the Master. He’s walking down the street and, amid the rustle of leaves, you can make out Margarita’s flight on her broomstick.

Right here, on the same pavements along which the author himself strolled, his characters walk beside him – the majestically pacing Woland, Ivan Homeless rushing headlong – in a kind of parallel universe. Are these universes somehow converging?