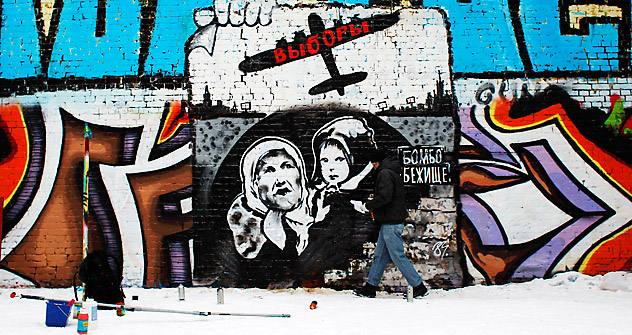 "The mission of street art is a dialogue with the ordinary person. You don't need a gallery for that; nobody has to take people's money so that they can look at your work. In a city, this is a visual game: a person does not go to the museum, but stil

Pavel 183 may not be the Russian Banksy, but something more critical and philosophical.

When Russian rock legend Viktor Tsoi passed away in 1990, someone inscribed in black on the wall of the house at 37 Arbat: "Viktor Tsoi died today." Someone else wrote in reply: "Tsoi lives!" And that is how the famous wall came into being, a symbol of freedom and memory, a place to hide a note for a friend or set up a meeting. Another such place was once the entrance to Russian writer Mikhail Bulgakov's apartment, spattered with illustrations and quotes from his famous novel "The Master and Margarita."

View the gallery: Street art with an intelligent face

These two places became the first hotbeds of the distinctive culture of street art during the era of stagnation in the 1990s. Inspired young artists drew with passion alternatively about the things that bothered them and those that prompted them to be creative.

Pavel 183 first saw the Tsoi wall at the age of 14. He has been drawing ever since. He has two university degrees, but refuses to name his profession. "It is really my tools, my secret brush. After seeing my website, all the media wrote that I was studying communication design. In fact, I was joking. I've always made fun of designers. I have several fields of study: one in design and typography, one in psychology and philosophy."

Pavel only became known as a street artist in Russia quite recently, after articles were published in the British papers the Guardian and the Daily Telegraph. The foreign media wanted to see in him the English street artist Banksy, and came up with the unpronounceable pseudonym "Bankski." "It's sad when, after 14 years of creative work, they compare you with somebody else. I am myself, not like anybody else," Pavel said in response. In the West they call him P183. Journalists took this moniker from his e-mail address. The artist's "real" pseudonym, the one he chose himself, is Pasha 183, or just 183.

"Russian street art came out of situationism," Pavel said. "It's hard to date its first appearance. If you listen to the Russian director Oleg Kulik, it all began in the 1910s and 1920s in Soviet Russia: a manifesto by [Vladimir] Mayakovsky, the poet of the revolution –'Let's paint our city in multicolors.' [Sergei] Yesenin composed poems on the street. If you dig deeper, you’ll remember 1919, after the revolution, when the freight cars that transported soldiers were painted by artist-revolutionaries. Only then it was not called street art. Situationism, to put it simply, is the art of revolution in the streets. I am essentially a street satirist."

It is not altogether clear whether the work of the street artist is, in fact, art. Pavel considers what he does creative. He sees art as a flexible concept. "A friend of mine was washing the dishes and suddenly, in a plate dirty with smears of ketchup, he saw the profile of Vladimir Ilyich Lenin. So he did not wash the plate, but left it that way. I believe that one's own perceptions can also be called art," Pavel said.

In 2005, Pavel made the film "The Tale of Alyonka, 2005," in which the rosy-cheeked, blue-eyed girl on the Alyonka chocolate wrapper becomes a kind of image of the modern child. In his words, everyone is forced to sell themselves in childhood. Thus, according to the author, life in the modern world is constructed so that all of us, like the anonymous Alyonka, buy and sell ourselves, willy-nilly.

"To make money in today's Russia, one does not necessarily have to have a head on one's shoulders. And yet without a head, there is also no civil society. [Literary critic Vissarion] Belinsky said that in St. Petersburg, you cannot be just an artist or just a bum; you have to be at the very least an artist or a bum." Although he is a Muscovite by birth, Pavel prefers St. Petersburg, calling it "a more European city."

Alyonka, as Pavel understands her, is the most radiant person on earth, аlways naive and selfless. "The mission of street art is a dialogue with the ordinary person. You don't need a gallery for that; nobody has to take people's money so that they can look at your work. In a city, this is a visual game: a person does not go to the museum, but still has a chance to see, to interpret, to think about your work," Pavel says with conviction. "I am by nature generally austere, accustomed to silence, to solitude. And I very much love ... dirt! In the summertime I look at my shoes, and at their soles. Dirt in itself is simple and natural; there is nothing exaggerated about it. When a person can look at himself as if looking at dirt, seeing the great in the small, we achieve balance. Without that, without this balance of our souls, minds, and actions in the outside world, we risk becoming a `McDonalds,' with its menus and portions, always prepared according to identical proportions and measurements."